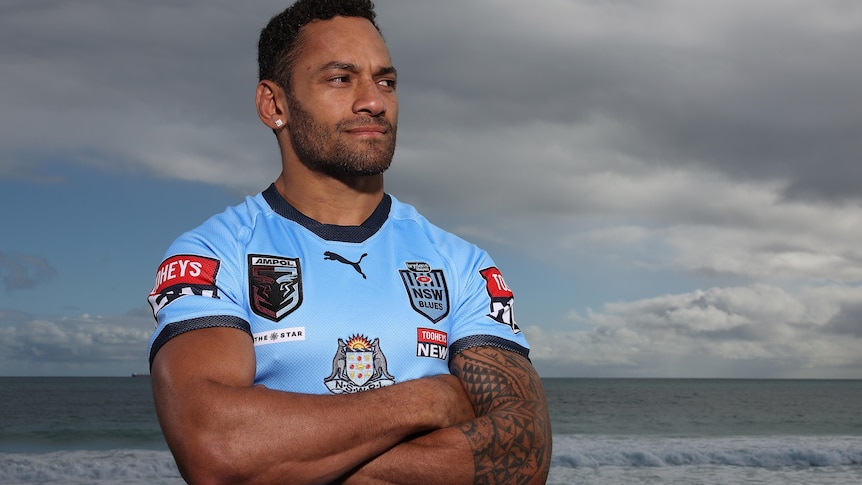 “‘Cookie’ has done an incredible job and no one is going to replace what he has done,” Apisai Koroisau told ABC Sport.

The Rabbitohs star has started as a hooker for 13 straight State of Origin games, but will start off the bench for Game II after the Blues’ shock loss in Sydney earlier this month.

Koroisau doesn’t want to be overwhelmed by the pressure, knowing he has to step up in Perth for New South Wales to keep his series hopes alive.

“To be honest, I’m trying not to think of it that way: at the end of the day, it’s just a job that needs to be done, it’s not like we’re doing something too different or too crazy, it’s the same thing we do every week.” Korosau said.

Starting the Panthers rake in just his second Origin appearance is just one of seven big changes to Coach Brad Fittler’s squad going into the must-win clash.

Koroisau wants to show that he is worth betting on, not by emulating Cook’s style, but by playing his own game to his own strengths.

“What I’ll bring is maybe just a bit of a steady head, try to move around the ruck a bit, a bit more energy in that middle, I’ll do my best and see what happens,” Koroisau said.

While the series opener was by no means a resounding loss, Koroisau feels the Blues’ performance was far from good enough and says the team has a lot to work on after the 16-0 loss. 10.

“Our speed at the ruck when playing the ball, how slow it was for us and how fast it was for Queensland, so defensively we have to be a little bit better and speed up our attack,” Koroisau said.

Want more Origin news and analysis? Subscribe to our State of Origin newsletter

“Our supports were down as well, so there’s a lot of room for improvement.”

In an effort to find that improvement, Fittler has taken a harsh approach to his team’s Perth preparations, calling his players to camp Sunday night in Sydney and leaving early Monday morning for a full week of training. .

The Blues also won’t break camp for a day, like they did before Game I, and the team will stay together for the full seven days before Sunday’s game.

It’s a very different approach from that of Queensland manager Billy Slater, who arrives with his charges in Perth on Thursday night.

Koroisau will be joined by his former Panthers teammate Matt Burton, who will make his debut at centers after Jack Wighton was ruled out for contracting COVID-19.

“I’m over the moon, there’s a lot of energy in the group and I’m looking forward to the week,” Burton told ABC Sport after his first session with the team.

“The guys have been really good, they’ve all surrounded me, so it’s a lot easier for me, I’m really looking forward to getting out there.”

Burton is sure his experience with the Panthers, where he played a crucial role in the team’s march to the 2021 premiership, will make the difference for New South Wales as it tries to take the pressure off and keep the Blues on track for fourth time. series victory in five years.

“Obviously it helps a lot, knowing those guys from last year, we’ve got some combinations in there and I can’t wait to use them,” Burton said.

“You know the pressure is always there, but we feel confident going into the game.”