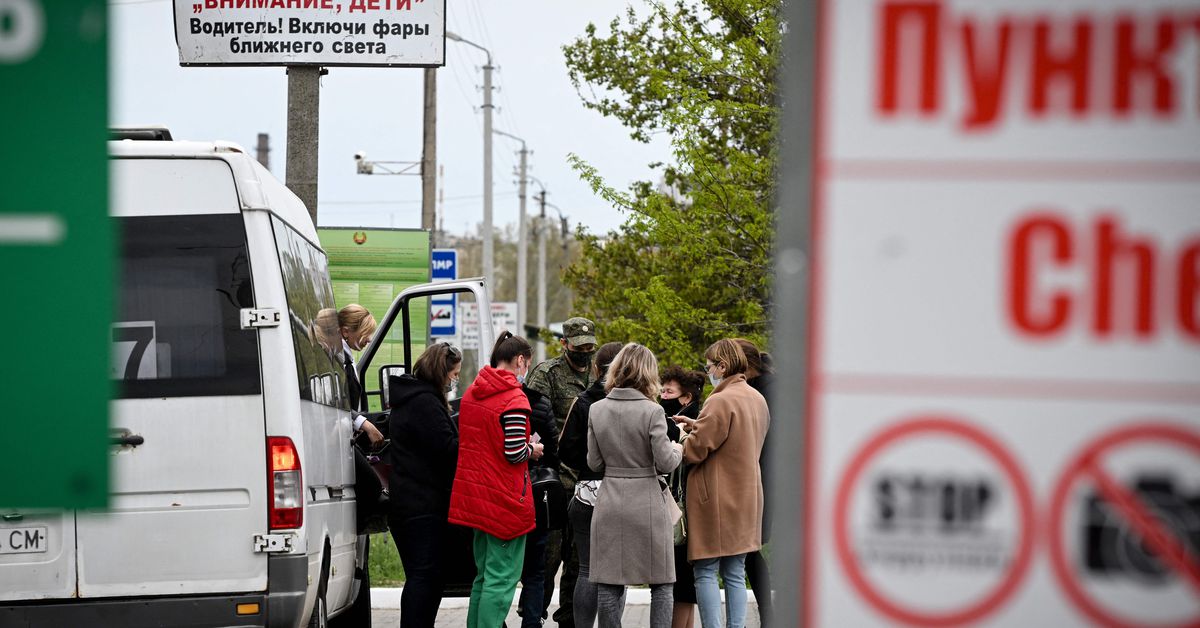 Over the weekend, pro-Russian separatists claimed Ukrainian drones dropped explosives on an airfield in Transnistria, a pro-Russian separatist region of Moldova that borders Ukraine. Western analysts have cast many doubts on those drone claims, but they came two weeks after a series of explosions were reported in the region. No one was injured in either event. but they were a reminder of the risks if Ukraine’s war spreads beyond its borders.

The explosions also shook the status quo of a decades-long “frozen” conflict. Amid the fall of the Soviet Union, Transnistria, backed by Moscow, fought to secede from Moldova. A 1992 ceasefire stopped the fighting, but Transnistria still maintains its de facto independence, although its status is not formally recognized by the international community, including Russia.

No one has claimed responsibility for the recent explosions in Transnistria, which targeted an empty state security ministry in Tiraspol, its capital, along with a radio tower transmitting a Russian-language station and a local military unit.

Experts said whoever organized the attack likely did so more through messages than intentional damage. But it managed to spark fears that reignited tensions could draw Transnistria, or Moldova, into wider conflict. There were also other clues. On April 22, the acting commander of Russia’s Central Military District, Rustam Minnekayev, indicated that Russia’s efforts to control southern Ukraine could create a bridge to Transnistria, where, Minnekayev said, there is “oppression of the population of Ukraine”. speak Russian.”

Ukraine is also concerned that Russia will use Transnistria as a possible staging ground for attacks in southern Ukraine, including near the port city of Odessa, or use it as another front to expand the war.

Moldova, a small, poor country with a tiny military, is in a precarious moment: seeking more support from the EU and the West, while maintaining its neutrality and trying to avoid provoking Russia. And Transnistria itself may have a rather complicated calculus: Although it was heavily dependent on Russia, it has expanded trade with the European Union, for its own economic benefit, and all of that would disappear if Russia subsumed it.

For Russia, despite its claims for a land bridge, the goal has always been to use Transnistria as a foothold to destabilize Moldova and the region. The territory itself is not the Kremlin’s goal. Right now, that’s still Ukraine. And the Kremlin is still struggling to control territory in eastern and southern Ukraine, meaning realities on the ground temper some of those risks of escalation. “The only thing that is saving [Transnistria] to be taken is the geography, the fact that Ukraine is between them and the Russians,” said Stuart Kaufman, a professor of political science and international relations at the University of Delaware.

Transnistria has always had closer linguistic and cultural ties with Moscow than with the rest of Moldova, the western part of which tends to share closer ties with Romania. The Soviet Union also heavily industrialized Transnistria, making it economically important during the Soviet era and leaving Moldova as a whole more dependent on the region.

When the Soviet Union collapsed, said Michael Eric Lambert, an analyst and expert on the region, that identity also meant that Transnistria did not want to go with the rest of Moldova and wanted to be independent or part of Russia.

Transnistrian separatists, backed by Russia, fought a civil war that killed an estimated 1,000 people, until a 1992 ceasefire essentially gave Transnistria de facto independence. Russian armed forces were permanently stationed in the region, including a few hundred peacekeepers as part of the ceasefire and the so-called Russian Armed Forces Operational Group, around 1,500 soldiers guarding a massive cache of ammunition. Transnistria also has about 10,000 soldiers of its own, according to Los Angeles. Times.

If you are Moldova, this situation was always a bit unsettling, and that was exactly the point of Transnistria for Russia. “Russia is putting political pressure on Moldova to keep it in its sphere of influence and prevent it from participating in Western European structures like the European Union,” said Agnieszka Miarka, a professor of political science at Silesian University in Katowice, Poland. Moldova is officially neutral and has said it will remain so, but if Moldova ever decides to change its mind, having pro-Russian troops on its soil would also make NATO membership impossible.

Transnistria’s de facto government is pro-Russian and, as experts said, the region shares history, language and culture with Russia. (At the same time, the territory of about 400,000 has sizeable Ukrainian and Moldavian or Romanian-speaking minorities.) The territory traditionally relied on the Kremlin for things like energy and pensions, though Moscow hasn’t been as generous of late as it used to. it was.

But Transnistria’s economic ties have started to change in recent years, as a consequence of Moldova’s trade agreement with the EU. Now about 70 percent of Transnistria’s exports go to the European Union. That has created a dichotomy, where the region’s political sympathies still align with Russia, but its economic interests are more firmly tied to Moldova and the European Union. And that may be one of the reasons that go against the possibility of an indirect conflict.

What are the chances that the conflict in Ukraine will spread to Moldova?

The de facto government of Transnistria has not condemned Russia’s invasion, but has not supported it either.

As the experts said, despite the fact that Transnistria will not abandon its ties with Russia, it does not want to go out of the way to invite Moscow through its door. There is the economic factor; Transnistria would be cut off from the Western economy on which it increasingly relies, and instead depend on a sanctions-ridden Russia. There are also more common sense reasons. “Would you like war to come to your house? I don’t think so,” said Tatsiana Kulakevich, a professor of global studies at the University of South Florida.

So Transnistria is staying in a low place. “’We support Russia. Russia is our ally. Russia, Russia,’” Kulakevich said of the region’s likely thinking. “But Russia needs to communicate with us first.”

That is, Moscow would have to actually creating the land bridge that at least one Russian general claimed the Kremlin wanted to do. And experts really doubt that Russia can do that at the moment, given that the Russian military is bogged down in eastern Ukraine, and although it has advanced in the east and south, these battles are also wearing down Russian troops.

As Russia does not border Moldova, it could not easily supply or bring troops into Transnistria, making it an unlikely front from which to launch an attack on Ukraine. “I don’t think the Russians have the ability to do anything militarily with the troops that they have in Transnistria because they can’t supply them,” Kaufman said.

Still, some analysts said threatening Transnistria alone may serve a purpose, specifically by forcing Ukraine to move troops into the area to defend places like Odessa, and away from other active fronts. It also allows Russian President Vladimir Putin to “pretend he is winning more than losing,” as Lambert put it.

And as the experts pointed out, the threat keeps Ukraine and Moldova on their toes. Moldova applied for EU membership in March, although the country has a long way to go before reaching it. The EU has also said it will step up military assistance, in addition to the financial support the West provides to the tens of thousands of Ukrainian refugees who have crossed into Moldova. But Moldova has also been careful to reiterate its neutrality and remains dependent on Russia for energy. And officials have downplayed the risks of an overflow.

As the experts said, it makes little sense for Russia to expand the Ukraine conflict, given that it has already had to review its war goals. At this point, the chance of an actual spill still seems low. But Putin has made inexplicable military moves throughout the Ukraine conflict, and wars, once they start, are inherently unpredictable. “There is a risk of an escalation,” Lambert said. “Is a reality”.