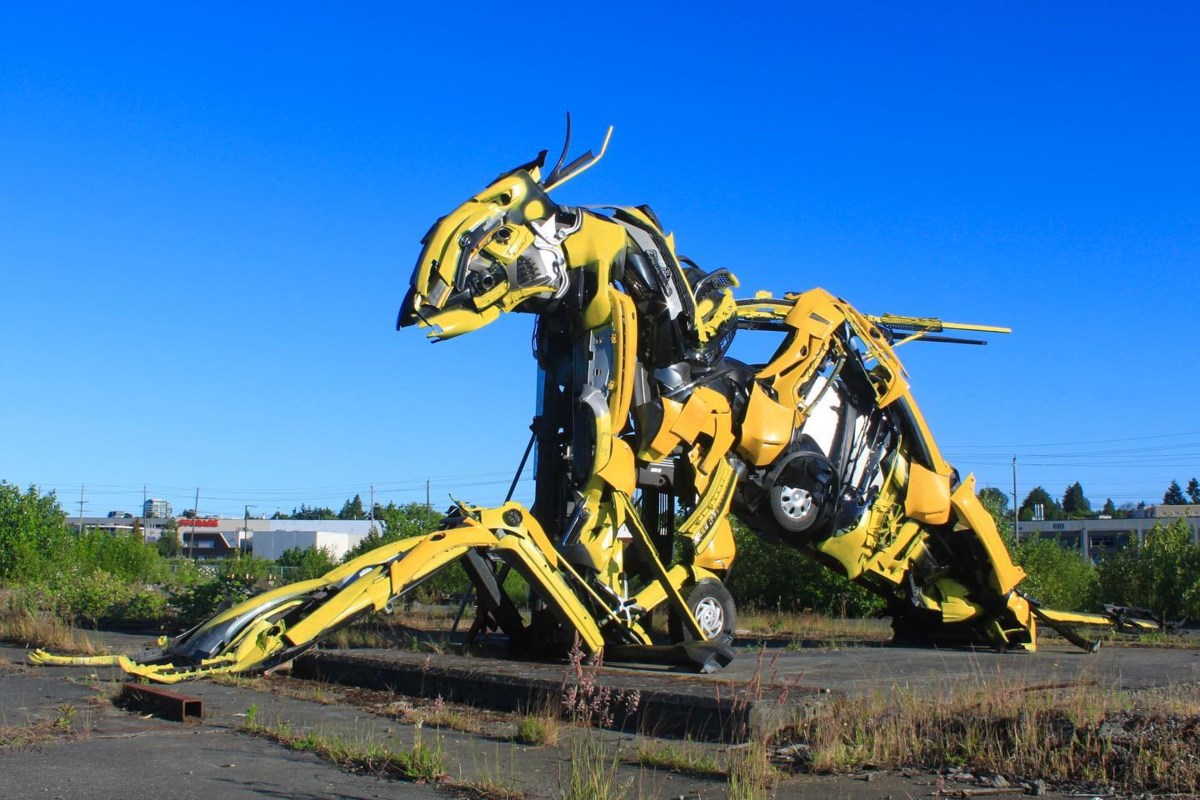 If you recently saw a giant yellow mechanical-looking beast resting near the Fraser River, you should know that no, the Autobots are not invading Vancouver.

I’m sorry for the disappointment.

On the plus side, the gigantic canine-looking object is a work of art called Queen BX1000and is the most recent installation from an artist known only as Junko Playtime.

The massive piece of art is made up of a wooden frame covered in car parts.

Ironically, perhaps intentionally, the Queen BX1000 was put together without the aid of engines or motors.

“The installation was created without the aid of a motorized vehicle. All materials were collected within the city and transported to the site in makeshift bike trailers,” Junko states in an Instagram post.

The piece, on private land, has been standing in full view of travelers as they pass over the Fraser River on the Canada Line, though it is a bit small and in the distance, as the lot it sits on is covered by bushes.

However, the piece itself is not small; Junko took photos with the big yellow art machine and using that as a reference she appears to be about 15 feet tall at the ‘ears’.

In one post, he shows how he collected the parts from what appears to be a mechanic who has a lot of leftover bumpers from taxi companies. He then packs it all into a bike trailer and ‘hangs’ in the parking lot.

until until Queen BX1000, Junko had been working in Montreal, turning scrap metal into robotic-looking beasts around the city. He has been active since 2020 as Junko, but keeps his true identity hidden; It’s not clear if the Vancouver project, which appeared in late June, was made while he was visiting Vancouver or if he now resides here.

In an interview with Global in Montreal, he described his work as “carefully arranged heaps of rubbish.” Some of the pieces of it have been quite large and have been installed in Montreal parks and parking lots, while others have been small and mobile.