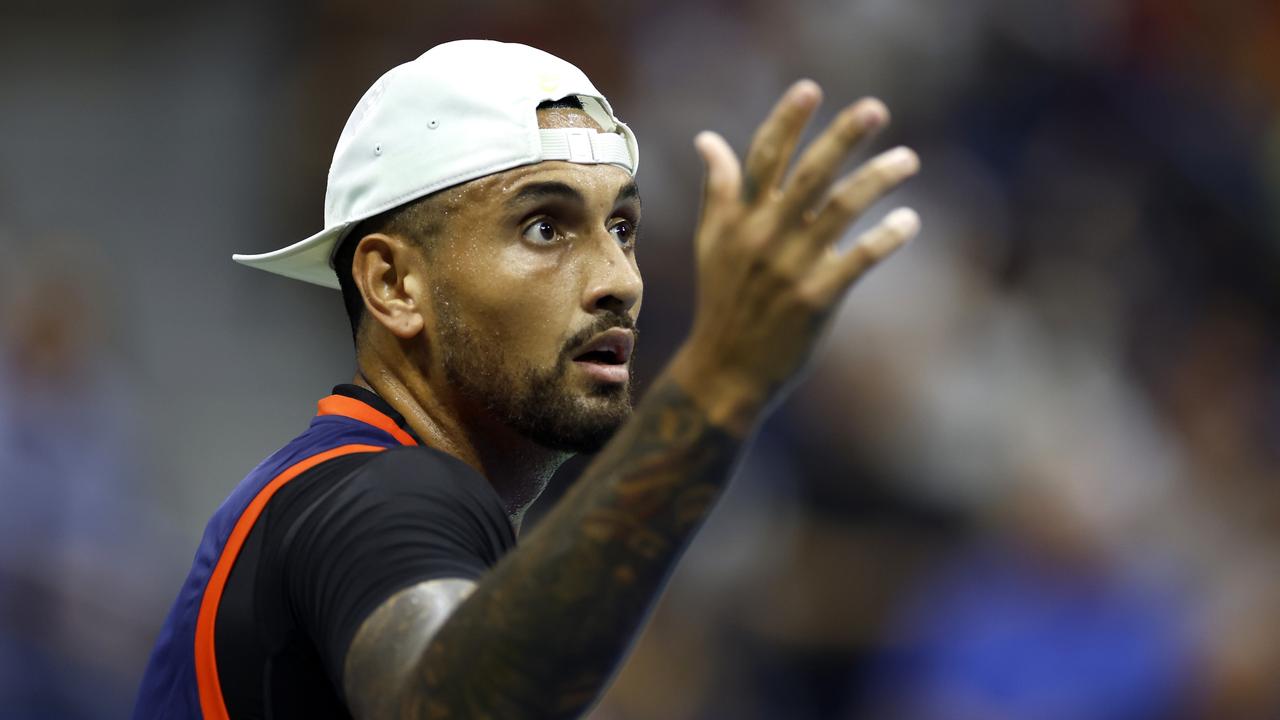 Nick Kyrgios will take on Daniil Medvedev on Monday morning (AEST) in the most salivating battle the US Open has seen in this tournament.

The Aussie is coming off a white-hot third-round victory in which he advanced to the round of 16 at Flushing Meadows for the first time in his career.

To Kyrgios’ credit is that he has a rare 3-1 head-to-head win record over the reigning champion, and their matchup is the talk of New York right now.

It is the prime-time game on American television as the opening game of the night session at Arthur Ashe Stadium.

Kyrgios secured the first break of serve in the opening set and took a 4-2 lead in a moment that brought the crowd to its feet.

However, it was soon 5-5 as Medvedev rallied in a service game when he made two gestures to get the crowd cheering louder.

The gestures did not go unnoticed.

“He’s saying, ‘Whose side are you on? I am the champion. You love to hate me, you learned to love me and I’m back.’”

The drama went to another level in the following service game when Kyrgios appeared to complain to the chair umpire about the use of the service clock where he was repeatedly in danger of taking too long.

In extremely wet conditions, Kyrgios seemed to complain that he didn’t have enough time to use his towel and get back to the service line in time.

“I come back from the box and there’s like six seconds,” he said.

“I’ve never had a problem with that in this tournament other than with you.”

The exchange with the umpire in the middle of a service game received a negative response from the crowd and he was booed in some sections before stepping forward for his next serve.

Medvedev’s loss on Sunday would mean he will lose his world number one ranking after the US Open.

The 26-year-old Medvedev has reached the semi-finals or better in the past three years at the US Open.

He admits he has been “amazed” by Kyrgios’ rejuvenation as a player that has seen him return to the top 25 after coming close to falling out of the top 100 at the end of 2021.

“We are both quite electric. You never know what’s going to happen,” said Medvedev, who has had no problems in the tournament so far.

“I don’t think we’re friends. When I say ‘friends’, we haven’t been to the bar together.

“I feel like we respect each other a lot. On the court we didn’t have any fights or anything either, which can change at any time.

“We are both quite electric. You never know what will happen in the future.

“Nick is a little bit different from other tennis players sometimes on the court. That is his choice. That is his life. I am not the one to judge.”

Despite dropping just one set on his way to the fourth round, it has been a turbulent campaign for Kyrgios, highlighted by a series of tirades towards the people sitting in his player’s box.

Meanwhile, Carlos Alcaraz says it’s “crazy” that Kyrgios selected him as the man to beat at the US Open.

Alcaraz, 19, is hoping to become the first teenager to win a Grand Slam title since Rafael Nadal in 2005.

“For me, it’s crazy for Kyrgios to say that I’m the favorite or that I’m going to win the tournament,” he said.

“I’d say he’s also one of the favourites.”