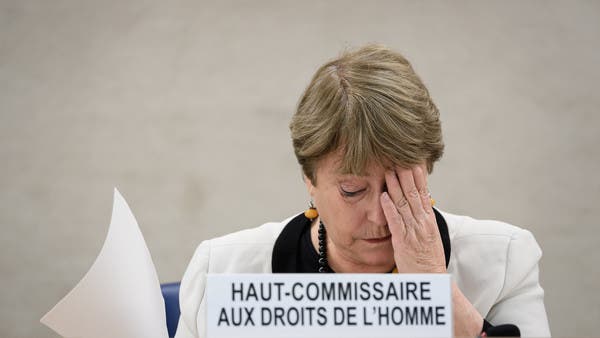 The United Nations High Commissioner for Human Rights, Michelle Bachelet, criticized in a statement the Israeli police’s attack on mourners during the funeral of slain Al Jazeera journalist Shireen Abu Akleh on Friday.

“I am following the events in the occupied West Bank, including in East Jerusalem, with deep anguish. The images of Israeli police attacking mourners at journalist Shireen Abu Akleh’s funeral procession in East Jerusalem on Friday, May 13, were shocking. Reports indicate that at least 33 people were injured,” she said.

Israeli forces stormed the grounds of a Jerusalem hospital on Friday as the coffin containing Abu Akleh’s body emerged before burial, with police saying they acted against people who “disrupted public order”, AFP reported.

Israeli forces attack Palestinian mourners as they transport the coffin of Palestinian-American Shireen Abu Akleh in Jerusalem, on May 13, 2022. (Reuters)

Television footage showed the Al Jazeera reporter’s coffin nearly falling to the ground as police seized Palestinian flags from the crowd around the procession outside St. Joseph’s hospital in Israeli-annexed east Jerusalem.

Bachelet considered the use of force by the Israeli police unnecessary at the time and called for a transparent and speedy investigation into the matter.

“Israel’s use of force, which was being filmed and broadcast live, seemed unnecessary and must be promptly and transparently investigated,” the UN human rights chief said.

“There must be accountability for the horrific murder not only of Shireen Abu Akleh, but for all killings and serious injuries in the occupied Palestinian territory,” he added, stressing that international law requires a “swift, transparent, independent and impartial”. in the use of force that results in injury or death.

The body of veteran Al Jazeera journalist Shireen Abu Akleh arrives at a hospital in the Sheikh Jarrah neighborhood of eastern Jerusalem on May 12, 2022. (AFP)

“As I have called for many times before, there must be proper investigations into the actions of the Israeli security forces. Every person responsible must be held accountable with criminal and disciplinary sanctions commensurate with the seriousness of the violation,” Bachelet said.

“This culture of impunity must end now.”

Since the beginning of 2022, around 48 Palestinians have been killed by the Israeli security forces, he explained, commemorating the death of Walid al-Sharif, a young Palestinian who succumbed to the serious injuries he sustained at the Al Mosque Complex. Aqsa in the hands of Israeli forces.