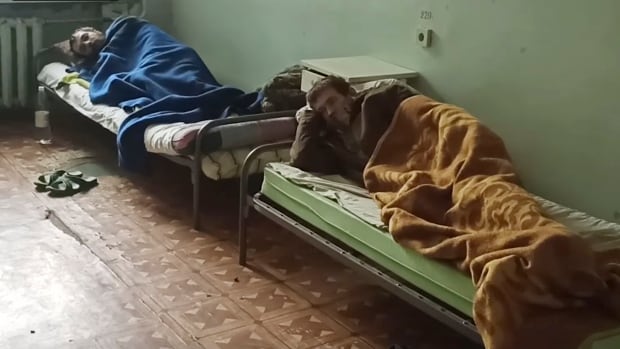 The Russian military said Thursday that more Ukrainian fighters who were making a last stand in Mariupol have surrendered, bringing the total who have left their stronghold to 1,730, while the Red Cross said it had registered hundreds of them as prisoners. of war.

The International Committee of the Red Cross said that searches of Ukrainian prisoners of war, which included wounded fighters, began on Tuesday under an agreement between Russia and Ukraine.

The Geneva-based humanitarian agency, which has experience in dealing with prisoners of war and prisoner exchanges, said however that its team did not transport the fighters to “the places where they are being held”, which was not specified.

Ukrainian fighters who emerged from the ruins of the Azovstal steelworks after being ordered by their army to abandon the last bastion of resistance in the now-ravaged port city face an uncertain fate. Some were taken by the Russians to a former penal colony in territory controlled by Moscow-backed separatists.

While Ukraine has said it hopes to get the soldiers back in a prisoner swap, Russia has threatened to prosecute some of them for war crimes.

The Red Cross cited the provisions of the Geneva Conventions that should allow the organization to interview prisoners of war “without witnesses” and that visits with them should not be “unduly restricted”.

Denis Pushilin, a top Russian-backed separatist official in a region that includes Mariupol, said Ukrainian soldiers who needed medical assistance were hospitalized while others were put in a detention center. He also claimed that Red Cross representatives were allowed to inspect the detention center, but that could not be immediately verified.

Amnesty International has previously said that the Red Cross must have immediate access to the surrendering Mariupol fighters.

‘He was everything to me’

In kyiv, a Russian soldier facing his first war crimes trial since the start of the Ukraine war testified Thursday that he shot a civilian on the orders of two officers and begged his victim’s widow to forgive him.

“I realize you can’t forgive me, but I’m begging you to forgive me,” the sergeant said. Vadim Shishimarin, 21 years old.

CLOCK | Emotional testimony in the first trial for war crimes:

In Ukraine’s first war crimes trial, a 21-year-old Russian soldier was confronted by the widow of the 62-year-old Ukrainian civilian he killed.

The woman, Kateryna Shelipova, said her husband, Oleksandr Shelipov, 62, went outside to see what was going on when shots rang out outside their home. When the shooting stopped shortly after, she came out to find her husband shot to death.

“He was everything to me. He was my defender,” she said.

Shishimarin could be sentenced to life in prison after pleading guilty Wednesday to shooting a Ukrainian man in the head through an open car window in a village in the northeastern Sumy region on February 28, four days after the Russian invasion.

Shishimarin said he initially disobeyed his immediate commander’s order to shoot the unarmed civilian, but had no choice but to follow the order when another officer forcefully repeated it. The officer allegedly insisted that the Ukrainian man, who was on his cell phone, could pinpoint his location to Ukrainian forces.

Ukraine’s Prosecutor General Iryna Venediktova earlier said her office was preparing war crimes cases against 41 Russian soldiers for crimes that included bombing civilian infrastructure, killing civilians, rape and looting. The prosecution was being closely watched as potential war crimes could eventually go before the International Criminal Court in The Hague.

Victims in Donbas, Kursk of Russia

Russia’s top prosecutor has petitioned the country’s Supreme Court to designate Ukraine’s Azov Regiment, among the troops that made up the Azovstal garrison, as a terrorist organization. The regiment has roots in the far right.

The Russian parliament was scheduled to consider a resolution to ban the exchange of Azov Regiment fighters, but did not address the issue on Wednesday.

Living in the ruins of the Ukrainian war

Inside an apartment building in Irpin, Ukraine, residents struggle to deal with the devastation left by the war, not knowing how they will get on with their lives.

Ukraine’s military did not mention Mariupol in its Thursday morning briefing, saying only that Russian forces were continuing to press their offensive on various sections of the front in the east but were being successfully repelled.

In the eastern Donbas region, which has been the center of recent fighting as Russian forces on the offensive have met stiff Ukrainian resistance, four civilians were killed and three wounded in the city of Severodonetsk in a Russian bombardment, the Governor of Lugansk Serhiy Haidai. .

On the Russian side of the border, the governor of Kursk province said a truck driver was killed and several civilians wounded by shelling from Ukraine. Separatist authorities in the Donetsk region of eastern Ukraine said two civilians were killed and five wounded, also in Ukrainian shelling over the past 24 hours.

CLOCK | The NATO push is probably not a “big surprise” for Putin: Swedish Ambassador to Canada:

Finnish and Swedish ambassadors are ‘optimistic’ and ‘humble’ about NATO bid

On the diplomatic front, Finland and Sweden could become NATO members within months, although objections from Turkish President Recep Tayyip Erdogan threaten to shake things up. Turkey accuses the two countries of harboring Kurdish militants.

US President Joe Biden is scheduled to meet with Swedish Prime Minister Magdalena Andersson and Finnish President Sauli Niinistö at the White House on Thursday.

UN chief in talks to try to free exports

Finance ministers from the Group of Seven leading economies, including Canada’s Chrystia Freeland, were in Koenigswinter, Germany, on Thursday to address the immediate effects of Russia’s war in Ukraine and the COVID-19 pandemic, exceeding their plans. most ambitious of reform. the worldwide economy

A refugee crisis, high inflation, food insecurity exacerbated by war and climate change, and the ramifications of a multi-year pandemic are just a few of the issues drawing leaders’ attention.

The Russian invasion of Ukraine and the blockade of ports on the Black Sea and the Sea of ​​Azov has produced a sharp increase in food and energy prices that is contributing to a slowdown in growth and threatening global stagflation, when the inflation and unemployment are high and economic output is low. .

The two countries are major exporters of wheat, barley and sunflower oil, with disrupted food and fertilizer supplies driving up already high prices and threatening food insecurity in Africa, the Middle East and parts of Asia.

German Development Minister Svenja Schulze said after meeting with her counterparts that the countries are launching a new Global Alliance for Food Security that aims in part to address the impact of the invasion. The World Bank is helping to implement the project.

Schulze said the goal is to better coordinate the efforts of aid donors and ensure that looming crises are not overlooked.

She said the G7 will seek to bring as many partners on board as possible, including emerging countries that may have supplies. The alliance “is really open. It’s not a closed club.”

The two days of meetings that began Wednesday at the United Nations also seek to help mobilize a global response to the food security crisis resulting from Russia’s invasion.

David Beasley, director of the UN World Food Programme, warned on Wednesday that “failure to open ports will be a declaration of war on global food security, leading to famine and destabilization of nations, as well as mass migration out of necessity.” “.

“This is not just about Ukraine,” he said. “This is about the poorest of the poor around the world who are on the verge of starvation as we speak.”