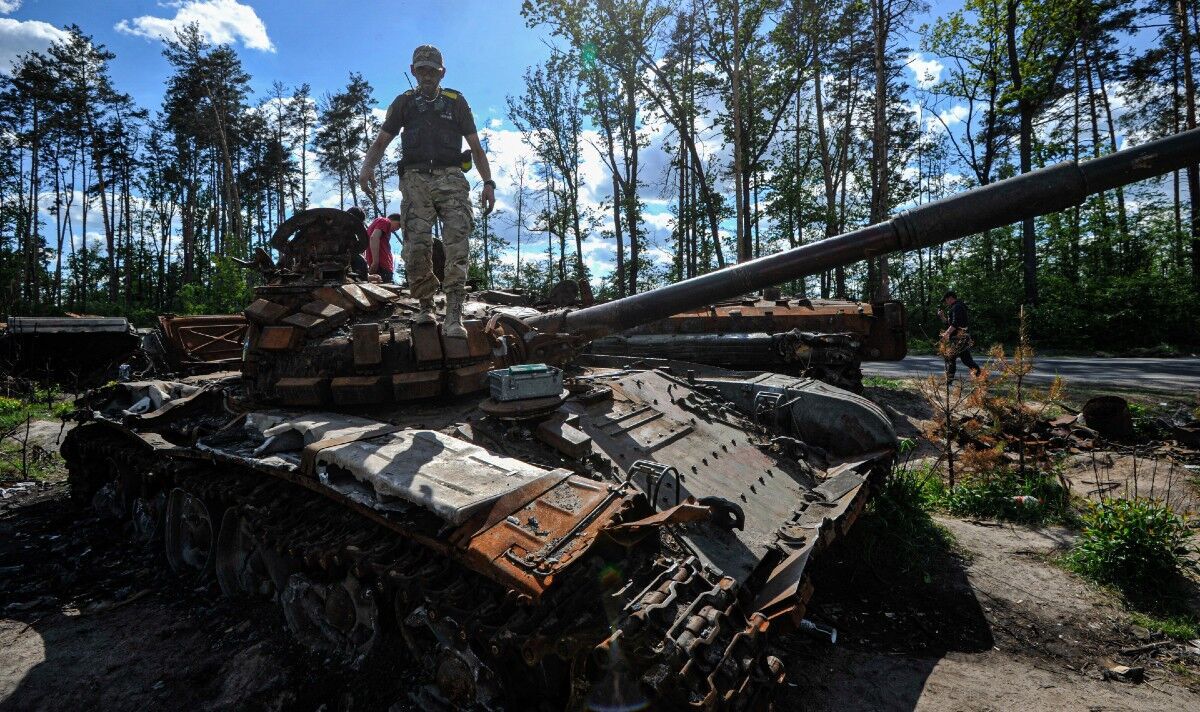 Ukraine can turn Donbas area into a ‘fortress,’ says Clarke

A fighter reportedly told his wife in Russia that his unit nearly mutinied, nearly killing General Valeriy Solodchuk, who had fired into the air in an attempt to drive them to the front lines. General Solodchuk, commander of Russia’s 36th Army, told the soldiers: “I will kill you all if you don’t fight!”

To which another soldier brandished a hand grenade, took out his safety pin and replied, “Come on, kill me!”

The dramatic exchange was reportedly intercepted by Ukraine’s security service.

A transcript was posted online along with a recording of an intercepted phone call between the first fighter telling his wife what happened.

The recording comes as regional governor Serhiy Gaidai told Ukrainian state television on Tuesday, May 31, that Russian troops are slowly advancing towards the city center of Sievierodonetsk in Ukraine’s eastern Luhansk region.

A man looks at a destroyed Russian tank in the village of Dmytrivka, near Ukraine’s capital Kyiv. (Image: Getty)

The DPR army targets the positions of the Ukrainian army (Image: Getty)

The capture of the twin cities of Sievierodonetsk and Lysychansk on the banks of the Siverskyi Donets River would give Moscow effective control over Lugansk and allow the Kremlin to declare some kind of victory.

The leader of the Moscow-backed Luhansk People’s Republic, Leonid Pasechnik, told the Russian news agency TASS that a third of Sievierodonetsk was already under control, but progress was less rapid than expected.

If confirmed, the Ukraine security service transcript would provide a glimpse of morale within Russia’s ranks three months into a war Moscow describes as a special military operation.

In the dialogue, translated into English, the soldier told his wife that General Solodchuk asked him how many days he had left until he finished his deployment.

READ MORE ABOUT THE POUND FACING AN EXISTENTIAL CRISIS

A woman hugs her mother as black smoke billows from a bus station in Lysychansk, Luhansk. (Image: Getty)

The soldier said he had about 20 days left, to which the general replied, “Then you have 20 days to disappear here!”

According to the transcript, the fighter told his wife: “So we all mutinied and refused to go to the front. Because this is already absolute stupidity.”

“There are only 215 left out of our [battalion tactical group] 600. The rest were killed or wounded.”

General Solodchuk brandished his rifle, fired and said, “I’ll kill you all if you don’t fight!”

DO NOT MISS:
Police hospitalized after car and bus accident [LATEST]
Princess Eugenie and her husband Jack will move to Portugal [REVEALED]
Prince Harry will return to the UK “with his tail between his legs” because he is “not happy” [REPORT]

The second soldier confronted his superior and demanded, “Come on! Kill me!” before a confrontation between the soldiers and the general’s bodyguards.

The transcript, shared on social media on Monday, May 30, by Ukrainian journalist Viktor Kovalenko, added: “The bodyguards of the Spetznaz general pointed their Kalashnikovs at us, and we also aimed ours.

“We almost killed each other. [The] The general escaped to his vehicle and left.”

Then, making a pun on the general’s name by calling him Svolochuk – svoloch translates to bastard according to the transcript – the wife asked: “Is this Solodchuk-Svolochuk really crazy?”

[2] Translation of what was intercepted by the Security Service of #Ukraine phone call between a Russian soldier in #Ukraine and his wife in Russia. He describes a near-deadly conflict with Colonel General Valeriy Solodchuk, a commander of the 36th Army who fired to force them to fight. pic.twitter.com/hSN5nUbn51

A destroyed truck on fire near a bridge connecting Severodoonetsk and Lysychansk (Image: Getty)

To which her husband replied: “Well, our brigade cannot capture anything because we no longer have anything (sic).

“[Ukrainians] destroyed everything, there are no more troops, nothing. We are left with only one mortar commander.

“We only have two 12 mortars left. They were all destroyed. Only three 12 vehicles can drive.”

Having failed to take the capital Kyiv at the start of the war, Moscow now seeks to consolidate its control over Donbas, much of which is already controlled by Moscow-backed separatists.

It has concentrated enormous firepower in a small area, hitting towns and cities with artillery and airstrikes.

Meanwhile, the Ukrainian government has urged the West to provide it with more long-range weapons to turn the tide of the war.

Ukrainian President Volodymyr Zelensky expressed hope on Monday that the weapons would be provided and that he expected “good news” in the coming days.

US officials have said such weapons systems are being actively considered.

The Kremlin has said its “special military operation” is aimed at ridding Ukraine of nationalists who threaten Russian-speakers.

Ukraine and Western countries have said that Russia’s claims are a false pretext for a war of aggression.

The West has imposed a barrage of sanctions against Moscow while delivering arms shipments to help the Ukrainian government defend itself.

US President Joe Biden said, however, that Washington would not send rockets to Ukraine that could reach Russia.