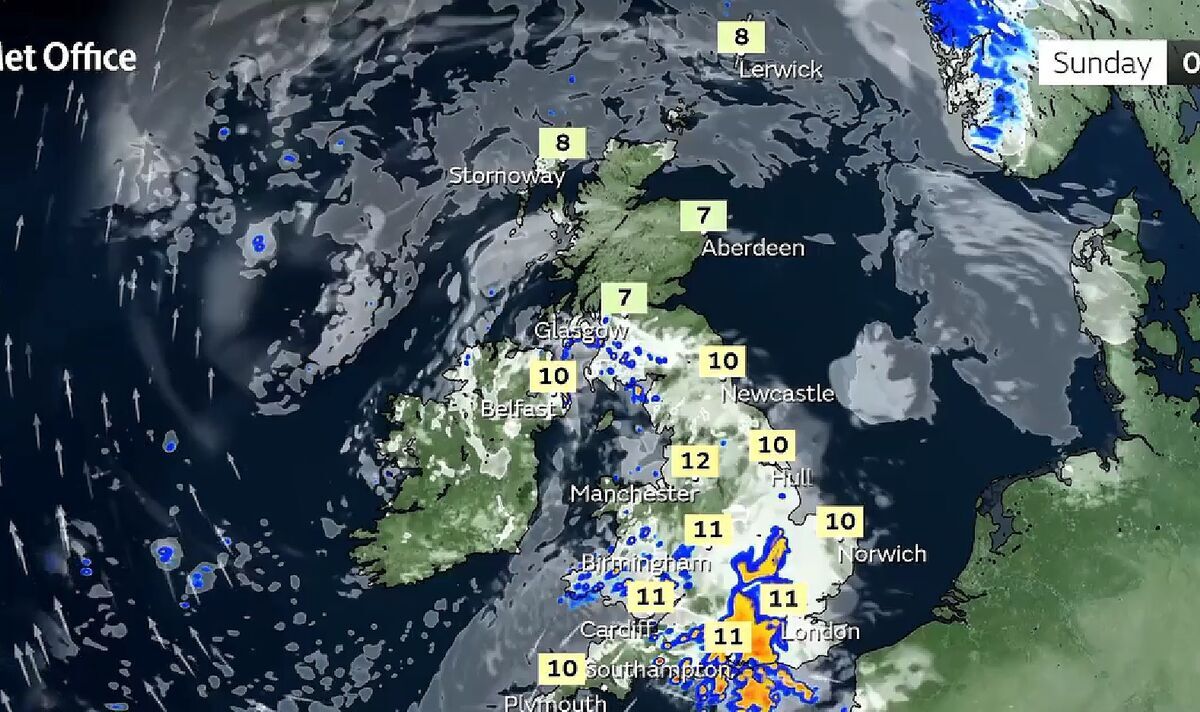 Temperatures are expected to reach 25°C, with Met Office forecaster Simon Partridge forecasting Sunday to overtake Saturday, where temperatures rose to 24°C in the southeast on what was the hottest day of 2022. till the date. However, there will also be rain and thunder on Sunday.

Partridge said: “Further north it will be drier and with clear skies it will feel much cooler here, away from the muggy air of the southern counties.
“And that’s how we really start Sunday morning, gray with a few spurts of rain in the south.

“Some rain has just hit the south west of Scotland.
“But during the day the sun will come out, the cloud will break and that will allow temperatures to rise again.

“And in the southeast, we could see highs of 25 degrees and that will be the hottest day of the year so far.

“But with that muggy, warm air, we’re going to see more rain start to push in from the south once again through the overnight period.

“And again, we will see a risk of thunder for many parts of the south of the country.”

According to the Meteorological Office, there will be “outbursts” of rain on Sunday that could become intense.

The weather service also said there was a chance of thunder on Sunday night.

“It gets brighter in the south, where it feels hot and humid with isolated showers, and gets stormy overnight.”

The Met Office added that while good weather will continue as the week progresses, there is a chance for more unsettled weather.

They said: “Warm air from the south will bring above-average temperatures to most parts of the UK over the next week, but a series of low-pressure systems will break any potential sustained warm spell with showers and unsettled weather.”

“In recent days, Met Office computer models have been indicating some uncertainty about the outcome of the interaction between continental high pressure, which brings warm, stable conditions, and low pressure systems over the Atlantic, which will bring warm, stable weather. wet and windy.

“With the heat will come dry and sunny spells for many, but the rains, sometimes heavy, will also spread across the country, particularly in the north and west. They can be stormy at times in parts of the south, central England and the south west of Scotland.

Met Office Chief Meteorologist Andy Page said: “The plume of warm air we expected from the south will bring higher temperatures across the country over the next week.

“However, it appears that the effects of the Atlantic lows will prevent a sustained high pressure from forming from the east.

“This means that while we may see some warm days, and in very warm places, in general, the coming week will feel more like what we would expect from a warm spell in May, with some heavy rain, rather than warmer weather. hot summer.”