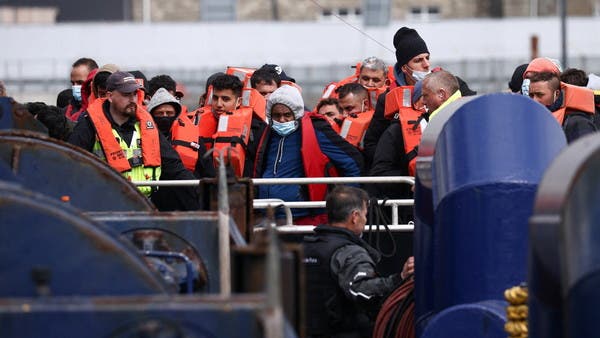 The UK’s National Crime Agency announced Wednesday that it has arrested the suspected leader of an international criminal operation supplying small boats to people smugglers ferrying migrants across the Channel.

The number of migrants crossing the busy shipping route from northern France is at record levels, prompting a UK crackdown, including controversial proposals to send those arriving to Rwanda.

The NCA said it had arrested “alleged small boat kingpin” Hewa Rahimpur, originally from Iran, at his workplace in east London, following a joint operation by UK and Belgian law enforcement agencies.

He said Rahimpur, 29, was wanted in Belgium on suspicion of being the leading figure in a network that prosecutors there say is involved in “supplying significant numbers of small boats to human traffickers.”

He tweeted images of officers handcuffing the man as he sat in a black Mercedes car.

“Rahimpur is accused of being a major player in what we would say is one of the largest criminal networks involved in supplying boats to human traffickers,” NCA deputy director of investigations Jacque Beer said in a statement. .

“Many of the criminal gangs involved in these crossings are based outside the UK, but when we find that they have a footprint in the UK, we will act quickly to disrupt and dismantle them.”

Rahimpur is accused of obtaining ships in Turkey and sending them to Germany, Belgium and the Netherlands.

He then allegedly ordered members of his organization to take them to the Channel coast in northern France for use by immigrants.

He will appear in court in London on Thursday for the start of extradition proceedings.

His arrest came after close cooperation between the NCA, Europol’s Migrant Smuggling Center and their counterparts in Belgium, the UK agency said.

In West Flanders, Belgium, prosecutor Frank Demeester said: “The Belgian police and judiciary invest a lot of capacity in the fight against human trafficking, and we will continue to do so in cooperation with our partners in neighboring countries.”

The NCA has repeatedly called on the UK maritime industry to be vigilant against purchases of boats and equipment by organized criminal gangs.

“One of the ways we seek to disrupt these human smuggling networks is to target their boat supply,” said Andrea Wilson, deputy director of immigration organized crime for the NCA.

More than 28,000 migrants crossed the Channel in small boats in 2021: United Kingdom