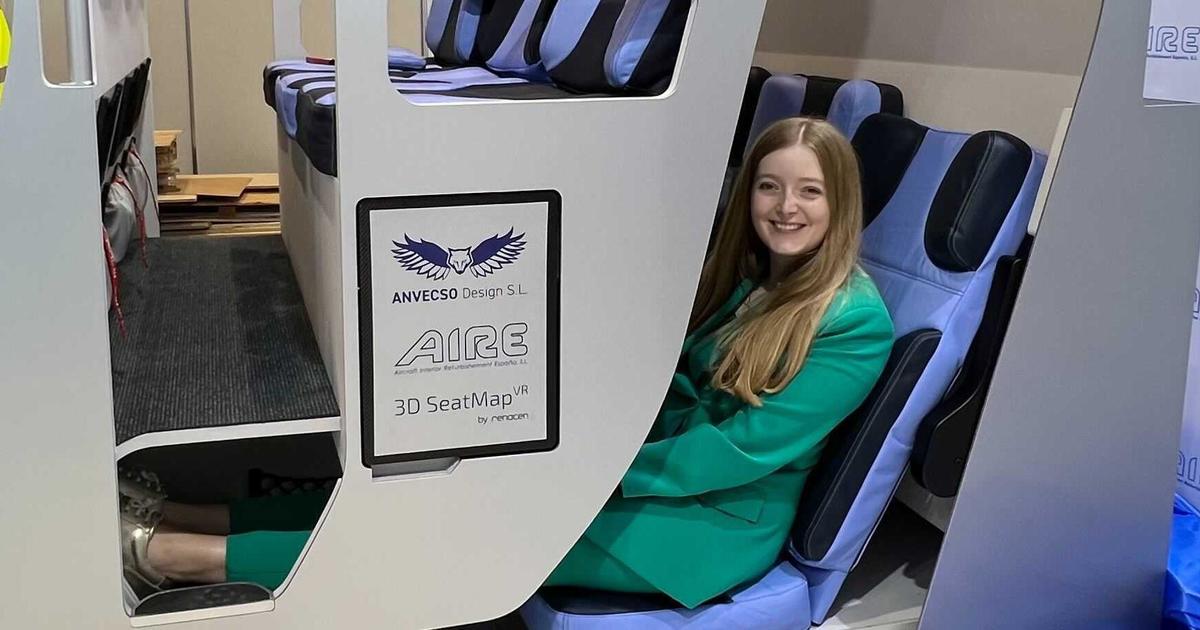 Flying economy for an extended period of time is an experience often endured rather than enjoyed, but an airline seat designer believes his design could revolutionize budget travel.

Alejandro Núñez Vicente’s Chaise Longue Airplane Seat concept began on a small scale last year, as a college project for the then 21-year-old. A nomination at the 2021 Crystal Cabin Awards, a major award in the aviation industry, quickly followed, and the design became the focus of a flurry of attention online following a CNN Travel article.

Since then, Núñez Vicente has been causing a sensation in the world of aviation. He took a break from his master’s degree to continue the project full time. He is in talks with big name airlines and seat manufacturing companies. He has been granted a strong investment that has allowed the project to develop.

But while some marvel at Núñez Vicente’s innovation, others recoil, worried about claustrophobia and convinced that sitting under someone else would be worse, not better, than the current configuration of the jet economy.

Its design is for the everyday traveler, so Núñez Vicente says he’s eager to hear what potential flyers have to say, positive or negative.

“My purpose here is to change economy-class seats for the good of humanity, or for all the people who can’t afford more expensive tickets,” he says.

Núñez Vicente is ready for even more feedback this week. AIX is one of the world’s largest aviation shows and is debuting the first full-scale prototype of its design.

CNN Travel stopped by to get a taste of what it would be like to fly in a double-decker airplane seat.

First, the upper level. Núñez Vicente designed the prototype with two steps in the form of a ladder for travelers to access the upper level. It’s a bit shaky, but once I’m on top, the seat feels roomy and comfortable, and there’s plenty of room to stretch your legs. The prototype seats don’t move, but each one is placed in different positions to indicate how they might recline.

Núñez Vicente’s design dispenses with the upper cabin. Instead, he has designed a space between the upper and lower levels for travelers to store carry-on luggage.

In the spacious, echoing halls of the Hamburg Messe conference center, it’s hard to imagine what it would be like to be so close to the cabin ceiling. Núñez Vicente calculates that there would be around 1.5 meters of separation between the seated passenger and the upper part of the plane. He argues that while a traveler wouldn’t be able to stand upright in that space, many can no longer stand upright in normal economy rows, though presumably these taller travelers will be further crushed by this design.

Next, testing the bottom row of seats. Nunez Vicente’s frustration with the lack of legroom was the original impetus for the design, and by not having a seat on the same level in front of me, it allows me to stretch my legs and there is a footrest for added comfort.

Still, because the other tier of seating is directly above me and in my line of sight, it feels pretty claustrophobic. But if you don’t mind tight spaces and just plan to sleep the entire flight, it could be an effective solution.

Now consider that the design could be implemented on a Boeing 747, Airbus A330, or any other medium to large wide-body aircraft.

Núñez Vicente is ambitious and confident that his design could become a reality, but he also recognizes that unusual airline seat ideas often don’t make it from concept to reality. It is a lengthy process and strict industry rules and regulations can become obstacles.

Plus, the economy seat on the plane hasn’t really changed in decades, even if designers have come up with plenty of reimagined concepts.

“One of the phrases I receive a lot is ‘If it’s not broken, why change it?’”, admits Núñez Vicente. “So if passengers are still flying in the worst economy seats, why are we going to give them a better option? It makes money. That’s the goal of the airline at the end of the day, not to improve your flight.”

Still, the seating designer is already working on the next step in his process, designing the structure to be lighter than its current iteration.

He hopes to partner with an airline or seat manufacturer to make that happen.

Núñez Vicente might now be collaborating with industry experts with years of experience, but the project started in his bedroom at his parents’ house, and his family is still a huge part of the process.

He is in AIX accompanied by his parents: they drove the chaise longue prototype in a van across Europe and helped him install the seat on site.

“Of course, at first no one expected this to become as big as we are today. But everyone knew that I was going to be able to do something,” says Núñez Vicente.

“If you had asked me earlier, I would have said maybe it’s just a college project. If you ask me now, after all the hard [work], after all the effort of many, many people, I would say that now this is more of a reality. We see it as the future of economy class.”