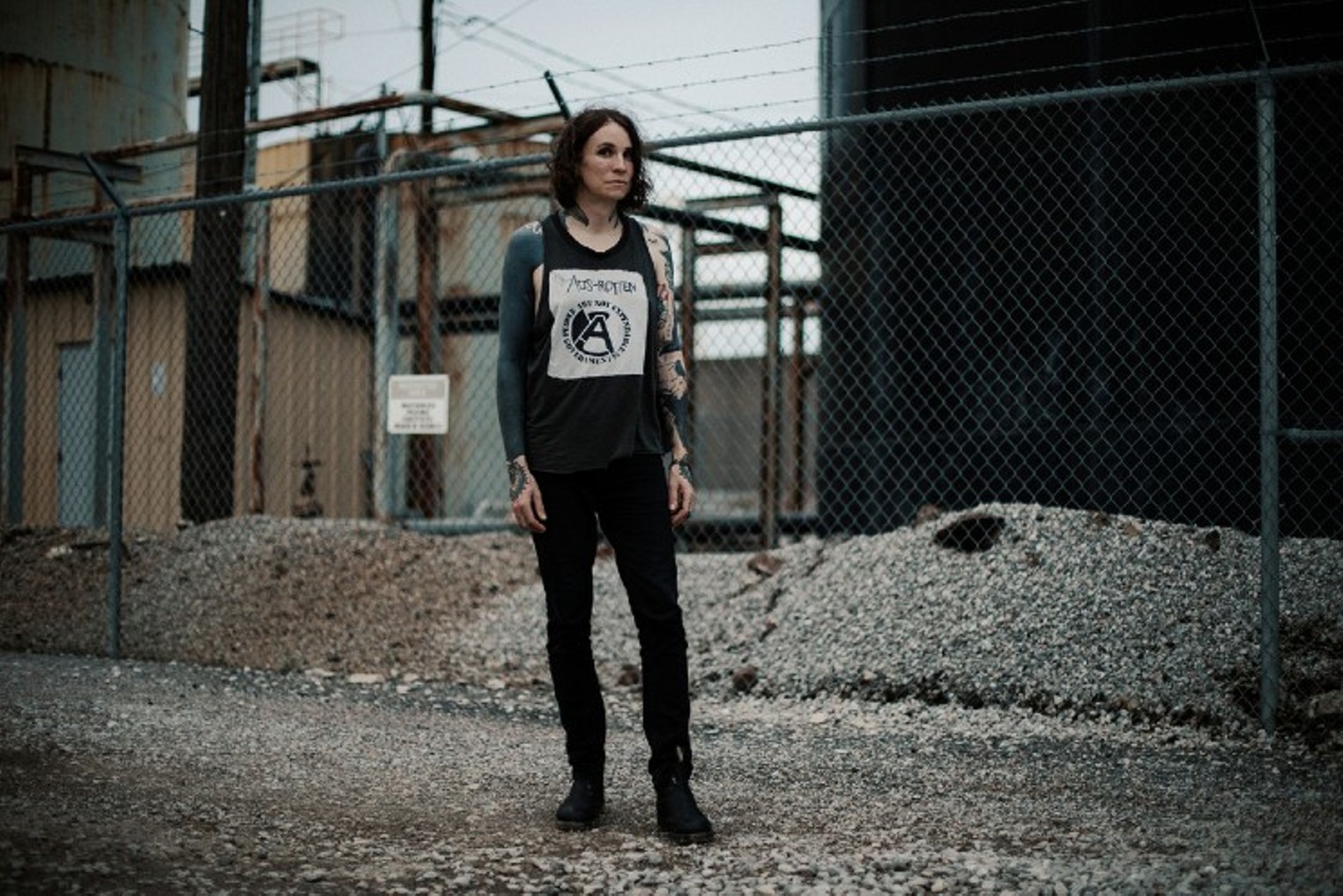 Laura Jane Grace reflected on a moment early on The Carousel Tour, which kicked off last week. The tour features the frontwoman of Against Me! Sharing the bill with her friends and fellow punk rock veterans Anthony Green and Tim Kasher, it’s scheduled for Sunday, May 15 at White Oak Music Hall. The moment Grace reflected on during our phone conversation was also a kind of metaphor for the nervous excitement that she and her fellow passengers experience when they get back on the road, a place where all kinds of magic can happen.

“Last night one of the most amazing moments happened in Chicago where Anthony literally asked a kid in the crowd to come up on stage and he just gave him his guitar and asked if he knew a song and the kid started playing and Anthony sang along. . . And the boy did it!” she said, apparently still amazed. “It was just one of those moments where you’re holding your breath waiting for disaster to happen, waiting for everything to fall apart, and then it doesn’t happen. And it is beautiful

“As Anthony said on stage last night, you have to be prepared. When that moment happens, when the door opens, you just have to walk through the door and have faith,” he said, speaking about that specific moment, but perhaps also about the resumption of shows for live audiences. “Just trying to create an environment where unexpected things can happen and magic can happen is really pretty wild.”

It’s the kind of moment that fans have been missing and musicians like Grace, Green and Kasher have longed for during the pandemic slowdown. Introducing music to the crowds is important to these acts and everyone has new music to share. Grace released two solo projects recently, 2020 critically acclaimed Stay alive and a 2021 EP titled At war with the silver fish. Kasher, also of Cursive and The Good Life, released new music last month, a solo album titled Middle Ages. Green, who is the lead singer of Circa Survive, Saosin and The Sound of Animals Fighting, presented his first children’s music collection last year. That EP has the perfect title and notion for children’s music. Is named let’s start a band.

Part of the fun of being in a band is the bond of being on tour, something Grace has done since Against Me! bowed 25 years ago. She has toured with the group, their side project The Devouring Mothers, and as a solo artist. But she admits that starting this tour feels a little different.

“You know, if we had this conversation two years ago, I would have said, yeah, I don’t have any anxiety before I go on tour, but this is the first month-long tour since COVID hit and it’s a little bit. It’s really surprising how much relearning that it involves, and that’s down to little things like realizing I’ve packed too much in my suitcase or just feeling like my whole pre-show routine has gone off the rails and relearning how to do it. everything,” he said. “This particular tour is really unique in that it’s me, Anthony Green and Tim Kasher and then we brought our friends Megan Siebe and Alex Kerns. Megan plays bass and cello and Alex plays drums, they join each of us on stage.


“All of us travel together on a bus. Some of us know each other a little bit over the years, like me and Tim have been on tour together before, but it definitely has the feel of an MTV episode. The real world where we’re suddenly thrown on a bus to live together and find out what happens when eight strangers are chosen to live in a loft and they start to get real.

“It’s been pretty amazing,” he once reported as we shared a laugh over this analogy. “It’s been really inspiring.”

“The tour itself was really Tim’s idea and Tim asked me if I’d like it and then I suggested we ask Anthony. Each of us has our own defined set,” he said, noting that each leg of the tour also features an opener. In Houston, it’s the Florida Home is Where emo folk act. “But, within our sets, each of us will show up and do songs with each other and Alex and Megan will also back up and play. And, we’ve been figuring that out as we go, where on the spot every night someone will be like, ‘Hey, do you want to do this song tonight?’ and then someone else will say, ‘Oh, that would be great. Can I join you guys on that song?’”

We suggest that it shows a level of trust and friendship shared by tour mates and Grace agreed that they are friends and trust each other, mainly due to all the experience each tour member has performing live. But she also thinks it’s okay to try a new model of live music now.

“Really, coming out of the pandemic, I don’t want to go back to the way I was before, you know? I want to approach things in a different way, which means being uncomfortable. That means having that ‘this could fall apart’ feeling,” she offered. “That unknown is a good thing and it gives you the space to learn and grow and become something new and discover it as you go. And that’s exciting. That speaks to the true heart of rock and roll, spontaneity and creating in the moment and seeing what happens and having fun with it.”

Grace speaks from experience, from her story of coming out as transgender and becoming an icon in the LGBTQ community. Her will to grow from her has made her an accomplished activist, author, and musician. Lately, she has become a member of the Recording Academy, the group that oversees the Grammy Awards.

At war with the silver fish released last fall

“I’m the regional mayor of the Recording Academy, which is awesome to say,” she laughed. “Yes, I am mayor. Mayor Grace.

He said he respects the Academy’s attempts to create diversity and new energy and believes efforts to be more inclusive will benefit the Recording Academy and its artists as a whole. Perhaps the notion of “Mayor Grace” prompted us to ask her about any traditional political aspirations she may have. Or maybe it’s because she’s headed to Texas and spent time training in Florida, two states that are introducing laws that focus on gender identity and sexual orientation. Could she one day see herself in a conventional political position?

“I don’t know. I think it’s a really interesting question,” he said. “I think also, for all the reasons you talked about with Texas, and even pointing to Beto O’Rourke and his connections to the punk scene, it might seem like It’s not such a far-fetched question. It’s not that far off if someone who used to hang out with At The Drive-In and play in bands with those people could get into political office.

“I don’t know. I’m not the kind of person who pretends to have the answers. I enjoy asking questions more and I’m also grateful to have a platform, but I’m also very grateful for the opportunities to lend that platform to other people and let them do the talking,” she continued. “I see the ultimate value in music having a political message. I don’t think music or artists should be apolitical. I think the role of the artist is to be a reflection of where society is or to be part of that discourse and if music doesn’t say something or if your art doesn’t say something, what good is it really? It’s like trying to find that balance between acknowledging that you don’t necessarily know all the answers and at the same time trying to say something.”

Despite current attempts to turn back the dial on progressive gender identity advances in Texas, Grace said, “I have nothing but love for Texas, I lived in Texas as a child. I grew up in the Fort Hood, Killeen area, I lived there for like four years, my dad was stationed there.”

And, she is a fan of his punk music. She had some nice things to say about Houston’s Days N Daze (full disclosure: the author’s son is in that band) and shared the secret that she recently worked with Austin’s A Giant Dog on new songs. She said that she considers Sabrina Ellis “the best punk rock or rock and roll vocalist/leader right now.”

“There are good people everywhere,” he said. “That’s even the tricky thing, I think most people are good and that’s a minority of people, the jerks, who are making it difficult for everyone else.”

Grace’s interest in people and her inquisitive nature have led to some interview opportunities throughout her career. She did some journalism for AOL Originals in 2014, and most recently, we were big fans of her reunion with We Are the Union’s Reade Wolcott for Vans. If she could choose to be an interviewer or a subject, which would she choose at this point in her career?

“It depends. Honestly, a conversation with someone like you, it’s great. Because it feels like a real conversation and it’s not the same questions,” he said, recalling that he has actually written a memoir that covers a lot of those “same questions.” “I definitely like to ask other people questions and let them do the talking.”

What would she ask herself? If Laura Jane Grace were both an interviewer and an interviewee, what is the one question she would ask herself? Her response brought us back to the starting point of the tour and this present time, with her residual uncertainty and anxiety, but also with all her hope and promise.

“I think I interview myself every morning, when I wake up and say, ‘What happens next?’ And I never know the answer. That’s a pretty good thing.”

Laura Jane Grace joins Anthony Green and Tim Kasher for The Carousel Tour, Sunday May 15, 2022 at White Oak Music Hall, 2915 N. Main. With Home is Where. Doors at 6pm for this standing room for all ages only in the White Oak downstairs hallway. $25-$30.