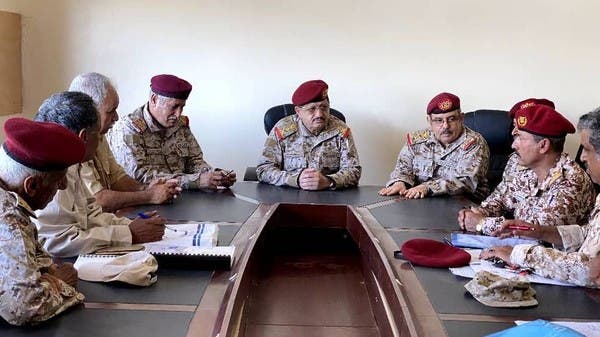 Today, Sunday, Yemeni Defense Minister Lt. Gen. Muhammad Ali Al-Maqdashi chaired an expanded meeting of the Intelligence and Reconnaissance Authority at the Ministry of Defense and its affiliated departments in the temporary capital, Aden.

The Defense Minister heard from the head of the Military Reconnaissance and Intelligence Authority, Major General Ahmed Mohsen Al-Yafei, an explanation on the progress of the work in light of current developments.

The Minister of Defense urged the leaders to “redouble efforts to develop performance in accordance with plans that are up to the developments, modern technology and the exceptional circumstances that the country is experiencing”, conveying greetings from the President and members of the Presidential Address. Council, and underlining the need to work tirelessly “to increase the effectiveness of the security and intelligence services and to qualify and train their members and the elements that collaborate with them”.

Al-Maqdashi said: “The stage requires the intelligence service to carry out the tasks entrusted to it in an efficient and efficient manner, and improve the integration and coordination between the various intelligence and security services to exchange information and experiences in order to protect national security, thwart plots, deter enemies, and expose their plans.

The Minister of Defense added that “the intelligence service plays a preponderant role in maintaining the security and stability of the country, and represents the cornerstone on which the military institution rests to maintain its cohesion and unity”, and explained that “the information and security battle is no less important than the field battle, since the combat battle and operational decisions depend to some extent on intelligence and reconnaissance assessments”, noting that “the Operational decisions depend on the success of the intelligence apparatus in monitoring and tracking the enemy’s attacks movements and penetrating their ranks and fortifications.

Al-Maqdashi explained that “the leadership of the Ministry of Defense is working to develop cooperation and partnership with brothers and friends in the field of security and information sharing,” highlighting “coalition efforts to support the legitimacy led by Saudi Arabia and the United Arab Emirates in support of Yemen, its leaders and armed forces”.