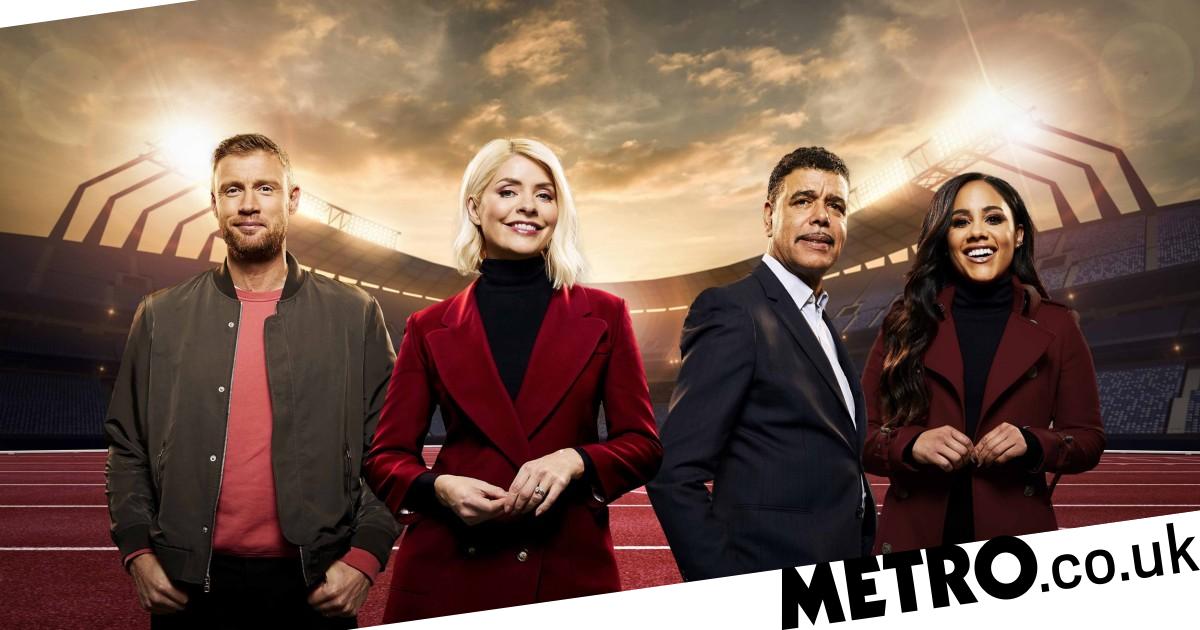 ITV’s upcoming action-packed sports show The Games follows various celebrities competing in a number of different sports, battling their way to the top of the medal table.

Freddie Flintoff and Holly Willoughby will front the series along with Alex Scott, who will also join as a sideline reporter and Chris Kamara as commentator.

Viewers will see 12 celebrities being pushed out of ‘their comfort zones’ as they train and train in different areas of the sport in the athletics stadium, pool and gym.

Competitors will also display their athletic prowess in events from the 100-meter dash to diving.

But which celebrities participate?

Here is everything you need to know.

Who are the contestants of The Games?

Model and autism awareness ambassador Christine will test her physical and mental strength in the upcoming series.

The 34-year-old recently revealed to fans that competing on the show was more difficult than she imagined.

‘I’m not quite sure what has happened with my life, to be honest. I don’t think I signed up for this. What a day,’ she said on Instagram.

The mother of three children is married to presenter Paddy McGuinness.

Olivia is best known for her iconic walk on Love Island and made it all the way to the finals in 2017.

The reality star has been a regular on screens ever since, later appearing on The Only Way Is Essex and Celebs Go Dating.

Singer Max George is known for being a member of the British boyband The Wanted.

The pop star is certainly no stranger to reality TV, having appeared on series 18 of Strictly Come Dancing.

The Gold Forever hitmaker was reportedly invited to join the show after Mark Wright, who reportedly quit via text message.

Former Strictly pro Kevin is also part of the lineup.

Although the 39-year-old has left the hit BBC One series in 2020, his big concern about The Games is ‘showing off’ in front of the live crowd.

“I’m so used to thinking ‘we’re going to entertain everyone,'” he said. Metro.es and other press.

“It will goad me and I’m worried my technique will go out the window because I’ll be like ‘yeah, come on!’

Wes Nelson starred in the fourth season of Love Island with Dani Dyer and Jack Fowler.

The musician showed his musical talent in a special edition of X Factor that led him to sign a solo contract with Universal.

The star finished in second place on series 11 of Dancing On Ice.

He appeared as Jason Grimshaw on Coronation Street from 2000 to 2016.

Ryan, who is engaged to former Towie star Lucy Mecklenburgh, has revealed the gender of their second baby as they prepare to welcome their new bundle of joy in a matter of days.

During the coronavirus pandemic, the actor shared his impressive exercise regimen. Colson made the most of his lockdown exercise, raising money for charity while running a virtual 5K and losing 10 stones while Coronation Street filming was on hiatus.

Since then, the actor pursued a career as an MMA fighter.

Like Wes, the star also appeared on Dancing On Ice in 2020.

The 47-year-old actress has also appeared on Coronation Street and made several cameo appearances on TV series including Doctors, Holby City, The Golden Hour and EastEnders.

Rebecca first appeared on Dales in 2018 as Manpreet, when he was covering for Dr. Cavanagh at Abbott Lane Surgery, and took a liking to Rishi when he came in for a checkup.

Chelcee has written for major artists like Dua and Kylie Minogue, and her songwriting credits include Dua’s Love Again, Dreams and Bad Together, Dua’s collaboration with BLACKPINK, Kiss and Make Up, Kylie’s Million Miles, Louisa Johnson’s So Good, The Saturdays ‘Walking Through. The Desert and Deeper by Olly Murs.

Football fans may also recognize the Scouser from her time with Merseyrail Ladies FC, Liverpool Ladies, Everton, Tottenham Hotspur, Tranmere Rovers and Fulham, and her work with BBC Sport and Sky Sports.

Phoenix is ​​best known as the daughter of former Spice Girls singer Mel B.

The influencer has more than 50,000 followers on Instagram and is also one of the youngest stars to participate in the series.

When does The Games start on ITV?

The first live program of The Games begins on Monday 9th May at 9pm on ITV, and will run on consecutive nights on the station.

Each episode will feature celebrity preparation as some of the UK’s top coaches will teach them the sport from the ground up. By following your grueling pre-competition training schedule, your goal is to reach your peak physical condition.

As the leaderboard takes shape each night, the series will culminate in a thrilling final showdown crowning a men’s and women’s champion.

The Games are broadcast Mondays at 9pm on ITV.

Do you have a story?

If you have a celebrity story, video or image, please contact the Metro.co.uk entertainment team by emailing us at [email protected], calling 020 3615 2145 or visiting our Submit Stuff page . I love to hear from you.

MORE: ‘ITV wouldn’t have it’: Chris Kamara offered to leave Games after struggling with speech