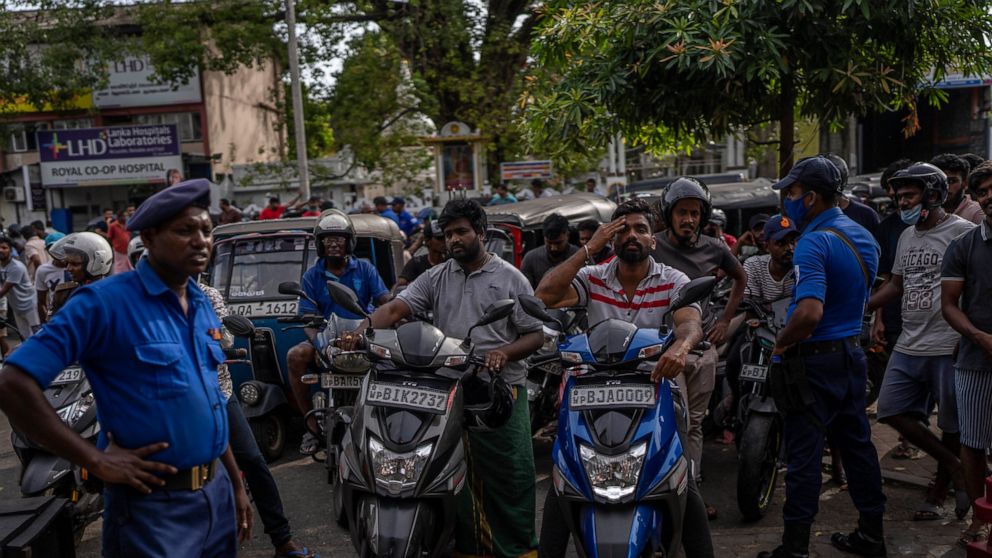 COLOMBO, Sri Lanka– A day after the Sri Lankan president fled, Mohamed Ishad waited outside an immigration office near the capital, holding a file of documents he hopes will renew his passport so he too can leave.

With the nation in the midst of its worst economic crisis, Ishad is jobless, dependent on family for financial support and selling vegetables to feed his wife and three children. He wants to go to Japan and find a job there so he can send money home.

Ishad is devastated to leave his family behind, but feels there is no choice, no chance, in his country. “Living in Sri Lanka at the moment is not good; if you want a good life, you should go,” he said. Not only has the economy collapsed, but “there is barely a functioning government right now.”

The bankruptcy has forced the island nation’s government to a near standstill. His once beloved and now reviled ex-president Gotabaya Rajapaksa fled to Singapore before resigning last week. Acting President and Prime Minister Ranil Wickremesinghe is seen as his representative and is opposed by angry crowds.

Parliament is expected to elect a new president on Wednesday, paving the way for a new government, but it’s unclear if that’s enough to fix a shattered economy and placate an angry nation of 22 million that has become disillusioned with politicians from all walks of life. trends.

The political uproar has deepened concerns that solutions to the crisis, including crucial assistance from the International Monetary Fund, may be delayed.

“Right now, the eye is averted,” said Dayan Jayatilleka, a former diplomat and political analyst. “It’s like in the middle of a serious surgery, everyone from the best surgeon to the anesthesiologist has rushed out of the operating room to start a revolution, but they have to come back and finish the surgery before the patient dies.”

The IMF is closely monitoring the situation, but any rescue package will depend on Sri Lanka’s debt restructuring strategy and political stability. “People are probably thinking, who are we talking to? Do you not care about the economy? Will the real president stand up? Jayatilleka said.

For months, the country has been on edge, sparked by a currency crisis that has crippled imports of basic goods like fuel, food and medicine. Doctors are warning people not to get sick as families struggle to eat three meals a day in a country once a South Asian inspiration for its expanding middle class and high per capita income.

Now the government is $51 billion in debt and unable to make its loan payments. Its currency has plummeted 80%, making imports more expensive and inflation worsening. Sri Lanka has only $25 million in usable foreign exchange reserves and needs $6 billion to stay afloat for the next few months.

“Gotabaya’s resignation is a solved problem, there are many more. They will continue if we don’t make the right choice in choosing our leaders,” said Bhasura Wickremesinghe, a 24-year-old maritime engineering student.

Presidential candidates include Dullas Alahapperuma, a former Rajapaksa minister who is backed by some members of the ruling coalition; and Anura Dissanayake, a Marxist leader whose public support has grown during the crisis. An expected candidate, Sajith Premadasa, the leader of the main opposition party, has thrown his support behind Alahapperuma.

The most controversial potential candidate would be Wickremesinghe, who could probably count on the support of the ruling party. Protesters have been rallying for weeks to remove him from office, accusing him of protecting the Rajapaksa dynasty. If he is nominated and elected, he will be a “powder keg,” Jayatilleka said.

The six-time prime minister, who is also the current finance minister, was appointed by Rajapaksa in May to start difficult negotiations with lenders and financial institutions. He also promised to reform the political system to curtail presidential powers. But his unpopularity grew as lines for fuel grew longer, food prices rose and power outages continued.

He recently called protesters “fascists” and imposed a state of emergency after his office was seized and his private residence set on fire.

Wickremesinghe is the only lawmaker from his party to hold a seat in Parliament after it suffered a humiliating defeat in 2020, limiting his public support and political clout. Many do not see him as a legitimate leader despite his experience and seasoned political career, said Bhavani Fonseka, a senior fellow at the Colombo-based Center for Policy Alternatives.

“This political uncertainty is a killer of the economy, that needs to be resolved quickly and in a way that satisfies the people of the country,” said WA Wijewardena, a former deputy governor of Sri Lanka’s central bank. An immediate roadmap is needed, focused on boosting exports, increasing revenues through new taxes and cutting spending, but none of this can be achieved without a stable government, he added.

Many people yearn for tangible change in their lives right now, Fonseka said, and don’t mind complex negotiations. “For them, it’s the basics of fuel and food, do they get it or not?”

He said whoever forms the government “cannot govern like before, they will have to interact better with the public and the protesters to show that they are different.”

“But if it’s someone who doesn’t have the trust of the people, then the tumultuous protests will continue and there will be no stability or solutions in sight.”