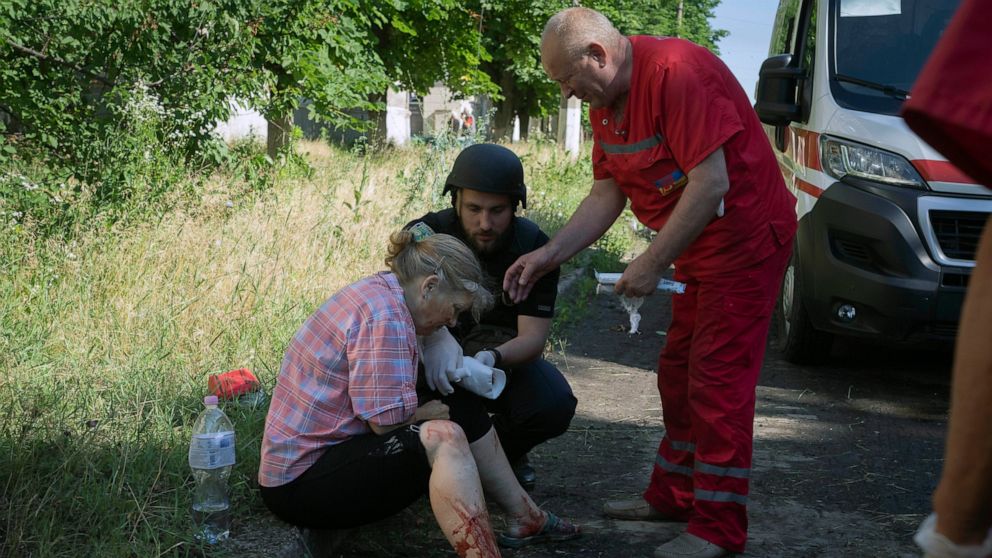 SLOVIANSK, Ukraine — Russia was mounting an all-out assault on the last Ukrainian stronghold in the eastern Luhansk region, “dropping fire” on the city of Lysychansk from the ground and from the air, the local governor said on Monday, as Western leaders met to discuss ways to bolster support. for Kyiv.

Lugansk Governor Serhiy Haidai said Russian forces were hitting Lysychansk after capturing the neighboring city of Sievierodonetsk in recent days. It is part of an intensified Russian offensive to wrest the wider Donbas region from Ukrainian government control in what Western experts say has become the new main target of President Vladimir Putin’s war in Ukraine, now in his fifth month.

“They are pouring fire on the city both from the air and from the ground. After the capture of Sievierodonetsk, the enemy army has concentrated all its forces on capturing (our) last stronghold in the Luhansk region – Lysychansk,” Haidai told The Associated Press.

The Russians were trying to blockade the city from the south, “destroying everything their artillery and multiple rocket launchers can reach,” Haidai said.

Over the past week, the Russian army has captured several towns and cities southeast of Lysychansk, now a staging area for airstrikes and shelling.

President Volodymyr Zelenskyy’s office said at least six civilians were killed and 31 others wounded as part of heavy Russian shelling of several cities over the past 24 hours, including Kyiv and major cities in the south and east of the country.

He said Russian rocket attacks killed two and wounded five overnight in and around Kharkiv, Ukraine’s second-largest city. Russian forces also continued to attack the key southern port of Odessa, with a missile attack destroying residential buildings and wounding six, including a child, he said.

The southern city of Mykolaiv also saw Russian shells hit civilian infrastructure, including a kindergarten, the president’s press office said. He did not give details of any victims.

In Lysychansk, at least five high-rise buildings in the city and the last road bridge were damaged over the past day, Haidai said. A crucial highway linking the city to government-controlled territory further south was made impassable by shelling but has not been captured, he said.

Such shelling is also making it increasingly difficult to evacuate civilians, Haidai said. The city had a pre-war population of around 100,000, about half of whom remain.

Analysts say that Lysychansk’s location high on the banks of the Siverskiy Donets River, as well as its large area dotted with hills, give the city’s Ukrainian defenders a great advantage.

“It is a very hard nut to crack. The Russians could spend many months and a lot of effort storming Lysychansk,” military analyst Oleh Zhdanov told the AP.

The Siverskiy Donets River encloses Lysychansk from the north and east, while the Ukrainian military continues to control the territory to the west of the city, which it uses to supply weapons and humanitarian aid. Moscow has now moved to try to blockade Lysychansk from the south.

To the west, in the government-controlled city of Sloviansk, local authorities accused Russian forces of firing a cluster bomb, saying it exploded in a residential neighborhood after dawn on Monday.

Authorities say the number of dead and injured has yet to be confirmed; the AP saw one death. A man’s body lay hunched over a car door frame, his blood pooling on the floor from scattered wounds to his chest and head. A woman, bandaged and covered in blood, sat in shock on the side of the road, waiting for the doctors to arrive.

The shock wave from the explosion blew out most of the windows of the surrounding apartment blocks and the cars parked below, covering the ground with shattered glass.

“In the last week we have seen an increase in the use of these cluster bombs,” said Sloviansk Mayor Vadim Lyakh, who was helping coordinate the emergency response. “As you can see, there is no military base here. This was a residential area where there were only civilians.”

Local resident Valentina Vitkovska wept as she spoke about the impact of the blast.

“Everything is now destroyed. We are the only people left living in this part of the building. There is no power. I can’t even call to tell the others what happened to us,” she said.

The main focus of Russia’s operations remains in the Sievierodonetsk-Lysychansk area, but Moscow “is now trying to regain momentum on the northern Izium axis,” the UK Ministry of Defense said in its daily intelligence update. .

The Russian government remains “reluctant to order a general mobilization,” the statement said.

Analysts have said such a call in Russia could greatly upset the balance in the war, but could also have political consequences for President Vladimir Putin’s government, which still calls Russia’s invasion a “special military operation” in Ukraine.

“In the coming weeks, it is very likely that the Russian campaign will increasingly rely on echelons of reserve forces,” he said.

— In Germany’s Bavarian Alps, leaders of the Group of Seven appeared ready to respond to Zelenskyy’s call for more air defense systems after Russian troops attacked Kyiv with long-range missiles on Sunday. The United States appeared ready to announce the purchase of an advanced surface-to-air missile system for Ukraine.

Zelenskyy spoke Monday by video link to the G7 summit, but immediate details were few during the closed-door uplink session.

— Moldova’s president traveled to neighboring Ukraine on Monday and visited the city of Bucha, the site of an alleged Russian massacre of civilians earlier in the war, among other Kyiv suburbs.

“Regardless of the economic costs, regardless of the political costs, we have to stop the war and we have to make sure that these kinds of atrocities never happen again,” said Maia Sandu. She said it was “heartbreaking” to hear the accounts of witnesses and victims of the war.

Sandu was expected to meet Zelenskyy during his visit, his office said on social media.