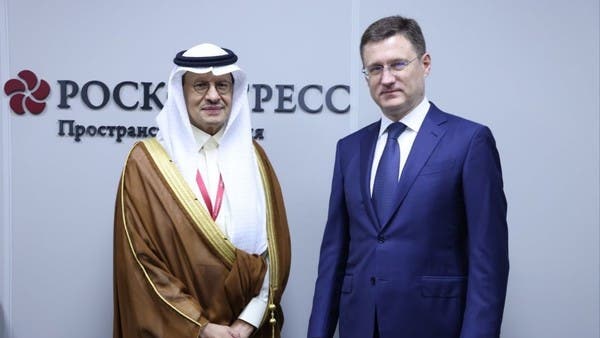 The high-level meeting comes at a time when Russia is pumping less than its quota under the OPEC+ deal, after Western sanctions prompted some buyers to refuse or delay receiving barrels of Russian oil.

At the same time, an OPEC+ document showed on Thursday that Russia’s crude output rose to 9.273 million barrels per day in May from 9.159 million in April. Novak promised a further increase next July with strong demand for Russian oil from India and China.

However, Russian production last month was 1.2 million barrels a day short of its quota of 10.55 million barrels, sparking speculation that Moscow will be suspended from the deal.

The meeting between Prince Abdulaziz bin Salman and Novak lasted more than an hour. Responding to a question about whether the OPEC+ partners are complaining about the lack of Russian production, Novak told reporters after the meeting: “We see that the current situation (on the world oil market) is balanced despite any doubts”.

Novak added that Russia may continue to cooperate with OPEC+ even after the current deal expires at the end of this year.

“Everything will depend on the market situation and whether it will require setting quotas or whether the cooperation will be based on basic principles. Things will be clear by the end of the year,” he said.

Prince Abdulaziz bin Salman declined to comment but described the atmosphere of Russia-Saudi relations as “as good as the weather in Riyadh”.