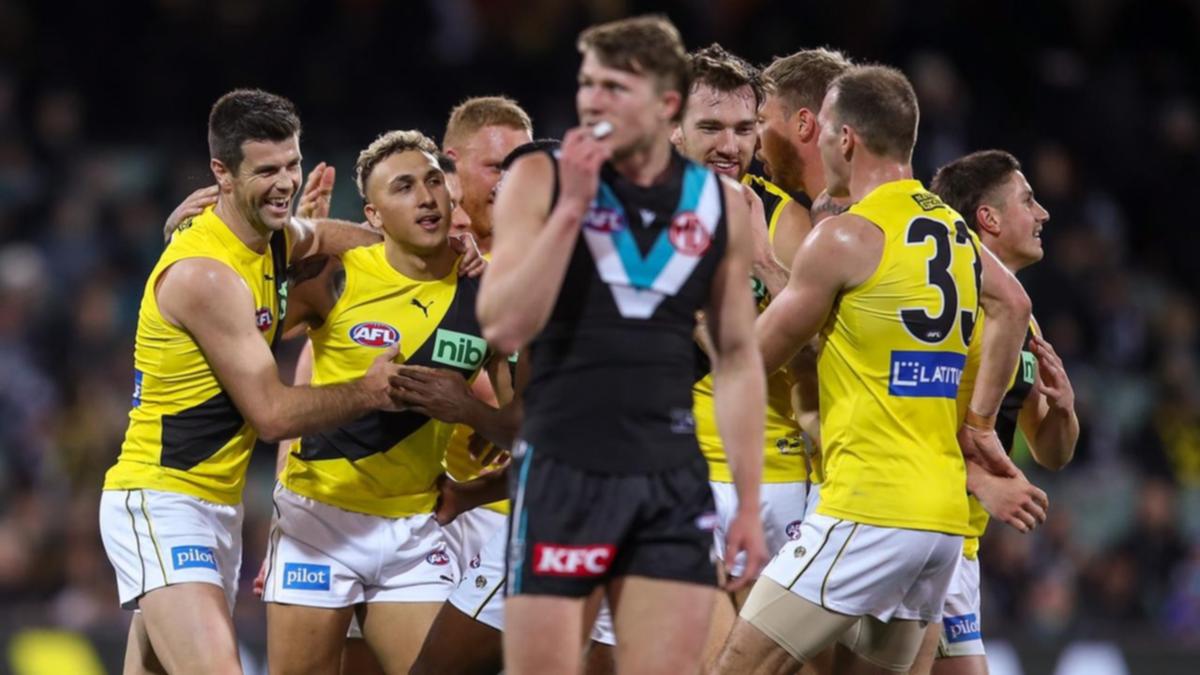 Richmond is back in the top eight of the AFL after shrugging off a serious break from defense to escape Port Adelaide in a 38-point win.

It was as if the Tigers smelled the finals action again with their manic attack on the ball after a close first half to take control despite losing a key defender for the entire second half.

A backline that no longer had co-captain Dylan Grimes had to defend the entire second half without another premiership hero in Nick Vlastuin, who was substituted with a rib injury in the opening minute of the third quarter.

Richmond covered the backward limitations by simply denying the Power the ability to move forward and be in range.

While the Tigers had viable targets with Tom Lynch and Shai Bolton scoring four goals apiece, the home team lacked forward firepower and were even forced to throw Charlie Dixon into the ruck in the second half to try to counter Toby Nankervis of the Tigers.

The only downside for the triumphant Tigers was a surprising charge against forward Kamdyn McIntosh and former captain Trent Cotchin’s possible citation for a sling tackle.

But overall, this was another example of why any premiership contender would dread facing Richmond in September, as the Tigers ran the power with slippery ball movement and the ability to take risks to get the ball quickly to your goals towering forward.

And the Tigers recorded their biggest win against Port Adelaide at Adelaide Oval without any contribution on the scoreboard from veteran Jack Riewoldt.

Bolton, who was scoreless as the Tigers beat the Power by 12 points in Round 13, further enhanced his position as one of the most exciting players in the game.

He was a constant danger forward with his lightning speed and clean hands.

And he helped set up the Tigers’ second-half onslaught with a goal after the fourth-time buzzer and another second before the half-time buzzer.

Cotching, Richmond’s experienced midfield leader, may be under match review scrutiny for a sling tackle on Power counterpart Ollie Wines midway through the first quarter.

The Tigers’ inaccuracy inside scoring range proved costly during a dominant first period when they led the 50-inner count 16-7 and prevented them from gaining a much larger than nine-point lead at the first break.

Rather, the Power made the most of limited opportunities and then re-entered the fray through central control by onballers led by Wines and Travis Boak.

With so much at stake for both teams, it was no wonder the ball carrier had to put up with pressure from the end guy, resulting in regular turnovers and rebounds off the defense.

And both fighters would have liked their chances to win during a welcome respite at halftime.

The Power scored the first goal after the restart, but any hopes of a home upset were dashed by Lynch’s three goals in the third period as Richmond 7.4 to 3.2.