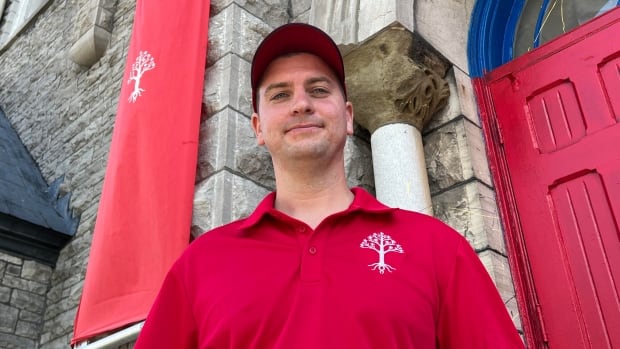 The doors of St. Brigid’s have been painted red and banners with a white tree insignia hang from each side.

It’s a striking image that caught the attention of community members and left some with questions, including about possible connections to the Freedom Convoy.

A director of the group strongly denied any link to the protest that shut down part of downtown Ottawa for three weeks last winter, saying he is not associated with the convoy and anyone who says otherwise is spreading misinformation.

But one of the organization’s directors shared posts about the convoy on social media and a second described himself as an adviser to Dwayne Lich, the husband of convoy leader Tamara Lich, during his bail process.

Sylvie Bigras, president of the Lowertown Community Association, said it’s not easy to get clear answers about the group that began work at the former Catholic church on St. Patrick Street.

“Their message is not very clear as to who they are and what their goals are.”

Group calls the building ‘The Embassy’

The tree logo hanging at St. Brigid’s represents The United People of Canada (TUPC), which describes itself online as a “diverse intergenerational fraternal organization.” In social media posts he refers to the building as The Embassy.

The group has been advertising weekly barbecues as an opportunity to check out what they’re up to. When CBC visited on Sunday, about 10 people were present, including several wearing hats bearing the TUPC logo.

Board director William Komer said the organization was founded this year and began considering acquiring St. Brigid’s in recent months to adapt it into a community event space where everyone is welcome to “dialogue.”

“There has to be a lot of healing in our communities,” he said, adding that he wants to establish a place where people can come together to discuss issues, whether they agree or disagree.

Komer suggested a model where people could use a key fob to access a co-working space, go to a coffee shop for coffee, or even access the site as a “24-hour secure community space, 7 days a week.”

“We’re in a due diligence process right now, with the current owners,” he said when asked about the building’s status. “It is under a purchase and sale agreement contract.”

Land registry documents show that a numbered company dating back to Patrick McDonald, one of the investors who bought the church after it was deconsecrated in 2007, still owns the property.

CBC has tried to contact McDonald since Friday, but has not responded.

When asked where the organization found funds for a purchase of that size, Komer said the main source of funding is through community bonds, adding that more information will be shared online at a later date.

TUPC’s website also offers visitors the opportunity to donate or purchase a variety of TUPC logo merchandise, from $45 water bottles and hats to $250 high-top sneakers.

We are also not Nazis, racists, misogynists or anything else.– William Komer, United People of Canada

“Some people have speculated, ‘Oh, were some of the Freedom Convoy funds used to buy a building here?’ I can say with certainty that is not the case,” Komer said.

“I don’t know what happened or didn’t happen with … those things, but it’s entirely funds that we’re raising privately through community taxpayers.”

The biggest contributor so far gave because of “good work we’re doing in the community,” Komer said, but he declined to say more about them because he hadn’t talked to donors about sharing their names with the media.

“I wouldn’t feel comfortable right now talking about who it’s given to, like all the hate that’s being thrown at our organization right now.”

The organization has hired legal counsel

Commenters on Reddit and Facebook have raised questions about the organization online. Komer said some have even gone so far as to suggest a connection to the convoy.

“We are also not Nazis, racists, misogynists or anything else that is defamatory, libelous online, which we understand is both civil and potentially criminal liability for people.”

Komer said the organization has hired legal counsel who is ready to step in if needed.

I would say at this point our community here in Lowertown is concerned and trying to get more information.– Sylvie Bigras, Lowertown Community Association

TUPC’s corporate documents show that it was founded as a nonprofit organization on March 24 and lists three directors, Komer, Kimberly Ward and Diane Nolan.

“This is just the beginning of something that is so beautiful for Canada,” he says in the video, asking people to pray for the couple. “Know that they represented most of us.”

Komer confirmed that the woman in the video is the same Kimberly Ward who is on the TUPC board.

Posts shared on Nolan’s Facebook page include several associated with Freedom Convoy and the movement it inspires, such as the Canadian Convoy Rally Song.

When asked about those posts and how some might see Nolan sharing them as affiliating TUPC with the protest, Komer said he disagreed.

“Whether or not someone personally supports something doesn’t mean an organization is affiliated with that thing,” he said. “To reach that conclusion would be inappropriate, and to make such a statement would be false in this case.”

Nolan has also shared information about TUPC and photos from the making of his team that were first posted by Dwayne Lich.

Images of Dwayne in a TUPC hoodie, including two in which he poses with his wife, can be seen on his Facebook page, along with images at and inside St. Brigid’s.

During Tamara Lich’s bail hearing in February, her husband told the court he didn’t believe in blockades, but also said he saw nothing wrong with comparing the protest to a big traffic jam or parked cars. in a snow storm.

I don’t see weapons. I don’t see anything criminal as far as I can see,” Dwayne Lich said at the time, also questioning whether the Emergencies Law was legally implemented.

When asked about Dwayne Lich’s role with TUPC, Komer said she believes drawing a connection between Tamara Lich’s activities with the convoy and her husband’s connection to the organization could be “discrimination based on marital status.”

“I am not aware that this individual, who is in fact married to Tamara Lich, has ever supported the Freedom Convoy that I am aware of,” he said.

Komer said that he himself was in Ottawa during the convoy as part of a documentary filming group, adding that what he saw during the protest differed from the public narrative.

Asked if he considers himself a supporter of the convoy and the freedom movement, Komer did not answer directly.

He said he thinks people should be able to have a conversation about COVID-19 mandates and mandatory vaccinations, but he doesn’t think the best place for the conversation is the streets of Ottawa.

“I think a building like this might be a better place for that, right?” she said, pointing to St. Brigid’s.

Rideau-Vanier County. Mathieu Fleury said the situation shows the “risk” of having a privately owned heritage property with close community ties in the market.

The injuries left by the convoy in Lowertown and ByWard Market are “fresh,” he added, saying he has seen the “distressing” questions about TUPC they have caused on social media.

Bigras, the president of the community association, said her staff have been on “a fact-finding mission” into the group and its plans.

Those efforts have included speaking with police and Fleury’s office. An association vice president also visited the building Sunday, but no one was there, he said.

The church is a beautiful property and the association would be delighted to see it occupied, but it is now in “wait and see” mode, according to Bigras.

“I would say right now our community here in Lowertown is concerned and trying to get more information.”