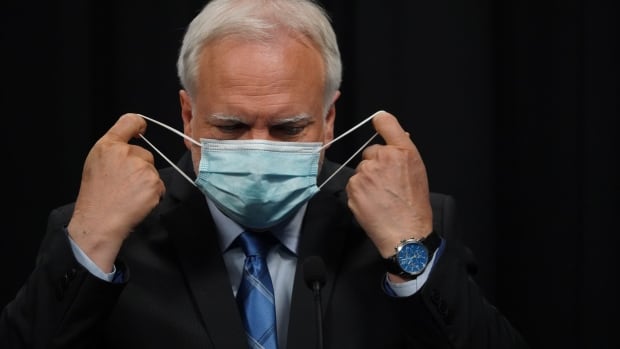 Quebec will officially lift its indoor mask mandate on May 14, the province’s acting director of public health announced Wednesday.

Dr. Luc Boileau said that hospitalizations and staff absences in the health care system were declining, which informed his recommendation. The Quebec government then accepted his suggestion to end the mandate.

“The whole portrait is getting better,” he said.

However, he said masks will still be required in healthcare settings, where vulnerable populations could potentially be exposed, and public transportation, because it’s more difficult to maintain a minimum distance between passengers.

On the other hand, primary and secondary schools will be able to remove their masks. Students will no longer be required to wear a mask for any of their activities, whether they are in the classroom, in the cafeterias, or walking the halls. The same applies to teaching staff.

Wearing a mask will also be optional on school transportation, given that students will have spent the entire day together, Boileau said.

“It would not be logical to make the mask mandatory [in school buses],” he said.

Boileau specified that masks are still recommended in certain situations, including when you have any symptoms, saying “you don’t need to be sure it’s COVID” to wear a mask and be cautious.

CLOCK | Quebec’s top doctor explains what it would take for masks to return:

Quebec’s acting director of public health says it’s impossible to predict the future, but he has an idea of ​​how the province will react to waves of COVID-19 caused by BA.2-like variants. 0:55

The province’s mandatory mask mandate has been in place since July 2020, for a total of 21 consecutive months, and will be the latest province to require masks in most indoor spaces.

Prince Edward Island, the only other province that still has a mandate in place, lifts its order on Friday, May 6.

However, some feel that the province should take its time and not move to lift the mask mandate so soon.

Dr. Matthew Oughton, an infectious disease specialist at Montreal Jewish General Hospital, said the masks not only work to counter COVID-19, but also influenza, which is widely circulating in the province.

The combination of the two is putting additional pressure on the province’s hospitals, he said.

“[Influenza] really stepping up and taking on a health care system that has already been, and continues to be, under significant pressure,” he told CBC Montreal’s Sunrise.

“Why don’t we give our hospitals as much profit as we can while we’re still trying to regain some footing?”

Oughton suggested that the government keep the mandate week to week.

But Simon Bacon, a professor of behavioral medicine at Concordia University, said many are specifically frustrated with the mask mandate, in part because they don’t understand why it remains mandatory.

“People really have no idea why they should be doing this,” he said. “Obviously we know that the pandemic is out there, but on the one hand the government says that we are going to maintain these measures in certain places. And on the other hand, they are getting rid of everything.”

“There is this contradiction globally,” he said.

Bacon said there is likely to be some “tension” between those who choose to continue wearing masks and those who don’t, but suggested peer pressure at the community level will likely set the norm.

For example, in schools, he said “the social norm of a particular classroom” appears to determine whether or not children keep their masks on.

“What will invariably happen is that a lot of people will start to shut out what’s going on around them,” he said.