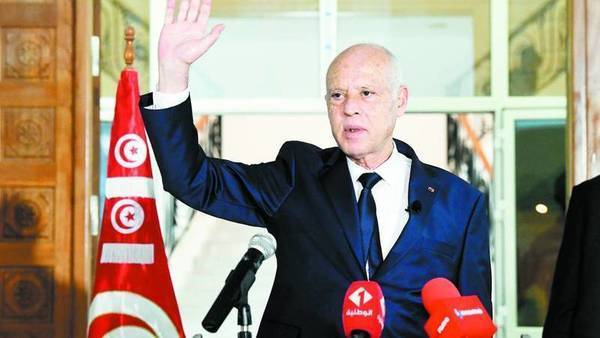 On Sunday, Tunisian President Kais Saied announced the formation of a committee to draft a new constitution for the country, refusing to dialogue with those he described as “corrupt” while warning against parties trying to overthrow the state. and manipulate its stability, highlighting that some of today’s crises are “manufactured.”

The Tunisian president said in a televised speech: “The Tunisian people have suffered a lot and it is time to put an end to this suffering.” He stressed that Tunisia has experienced great difficulties during the last period, noting that the epidemic and the war in Ukraine reflected on the situation in the country.

The Tunisian president announced his intention to form a committee to draft a new constitution, explaining that the committee in charge of preparing the constitution will finish its work in a short period of time. And he added: “We will continue the march and meet the hopes of the Tunisian people.” Invite those who have undermined democracy to the national dialogue.

He added: “We will form a committee to establish a new republic that will finish its work in a few days. We will not invite those who contributed to undermining democracy in the country to dialogue.” Saeed announced that the committee’s work will be submitted to a popular referendum on July 25.

He continued: “We are not going to go back, neither to reconciliation nor to negotiation nor to recognition with those who destroyed the country and destroyed it.”

“We are waging a war of attrition of the country’s history,” he said. He added that “some throw themselves into the arms of the outside to turn them against Tunisia, and there are those who cry for democracy and work to undermine it”, underlining their respect for popular legitimacy, warning at the same time, against parties that try to overthrow the State. and alter its stability.