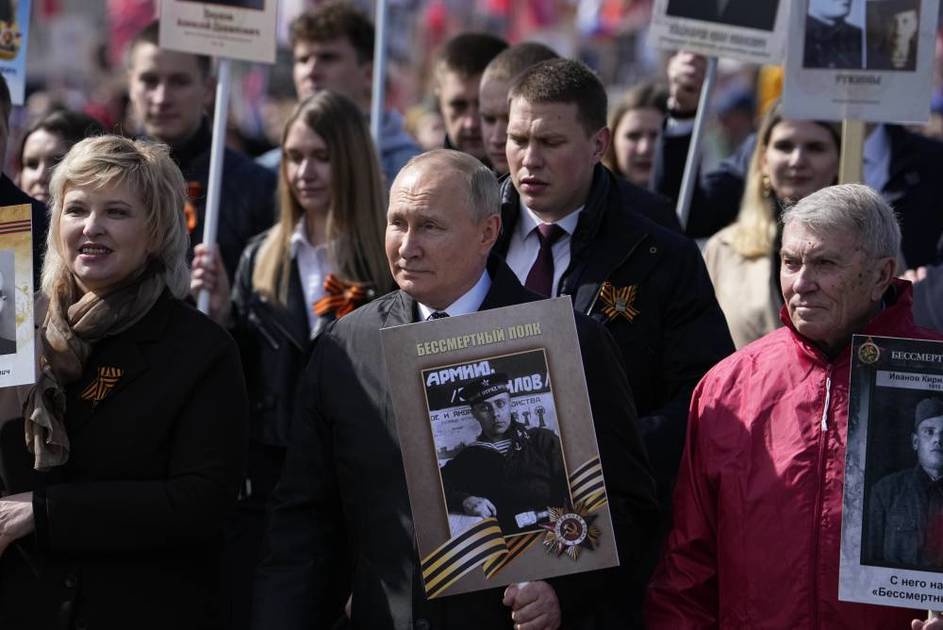 On Monday, Russian President Vladimir Putin disappointed Western expectations and speculation by declaring general mobilization and war against Ukraine after allegations that Russia had failed to achieve the goals of the Russian special military operation in Ukraine. The Russian Defense Ministry said its forces had shot down three Ukrainian fighters, two MiG-29s in the Donetsk region and another Su-25 in Kharkiv, destroying military centers and warehouses and a US-made radar station.

We defend the Donbass and the country

Putin delivered a speech during the military parade held in Moscow’s Red Square on Monday to mark the 77th anniversary of the victory in the Great Patriotic War (World War II), stressing that Donbass fighters and Russian army soldiers are fighting for the homeland and the future, and in his land where his ancestors fought against enemies.

He noted that Russia was calling on the West to have an honest dialogue, but the NATO countries did not want to listen to Moscow, and the alliance began to advance militarily to the regions neighboring Russia, and there were preparations to launch an attack on Crimea.

He stressed that a confrontation with neo-Nazis in Ukraine was inevitable, and Russia repelled the aggression with a proactive move, and that was the only correct decision.

After the dissolution of the Soviet Union, Putin said, the United States began to talk about its “unipolarity”, insulting not only the entire world, but also those in its orbit, and they meekly accepted it. He stressed that “we are a different country and we will never give up patriotism, faith, traditional values ​​and respect for all peoples and cultures.”

Separately, the Russian Defense Ministry said the high-precision aerial missiles destroyed two Ukrainian command sites and a Grad missile launch system battery, 18 military assembly centers near Lysechansk, and an American-made radar station. in the Zelztoy region. And near Artsys in the Odessa region, the helicopters were destroyed by Onyx missiles.

Russian fighters attacked 52 military assembly centers as well as an ammunition depot near Glukhov. In addition, 4 Ukrainian Smerch installations and one S-300 launcher were destroyed near Bogodukhov.

Authorities in the Donetsk People’s Republic said that more than 100 people have been killed since February 24 as a result of escalating bombing operations and attacks by Ukrainian forces in Donetsk. He noted that the kyiv forces attacked the city of Donetsk yesterday, Monday, with 122mm caliber shells and shelled a school in the Petrovsky district. In Lugansk, an entire Ukrainian brigade withdrew from the city of Lyschansk, and the Russian Defense Ministry charged what it described as “neo-Nazis” from the railways and bridges in Slaviansk.

Ukraine’s military said on Monday that four high-precision Onyx missiles fired from Crimea hit the Odessa region of southern Ukraine. The army did not give further details.

British Defense Secretary Ben Wallace said on Monday Ukraine’s defeat of the Russian military was very possible and called on Russian President Vladimir Putin to accept the fact that Moscow lost in the long run. .. go back to before February.” (Agencies)

Putin participates in the “Regiment of Immortals” march

In Moscow, the Immortal Regiment was organized in honor of the soldiers of the Great Patriotic War, and President Putin took part in it, carrying a photo of his father.
Moscow Mayor Sergei Sobyanin said hundreds of thousands of city residents had gathered to take part in the march despite bad weather, estimating the total number of participants at around a million.