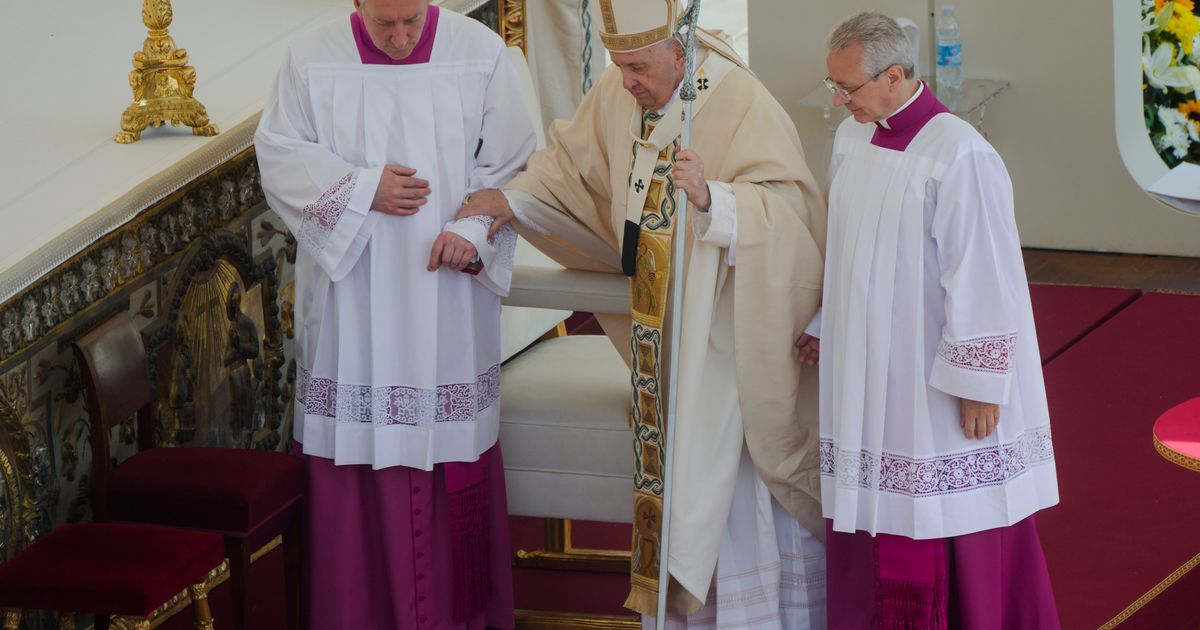 Pope Francis created 10 new saints on Sunday, recovering from knee pain that forced him to use a wheelchair to preside over the first canonization ceremony at the Vatican in more than two years.

Francis stood for a long period at the beginning of the ceremony to greet the priests concelebrating the Mass, and limped over the altar to proclaim the six men and four women saints. They include a Dutch priest-journalist who was murdered by the Nazis, an Indian lay convert who was murdered for his faith, and half a dozen French and Italian priests and nuns who founded religious orders.

Francis told the crowd of some 45,000 in St. Peter’s Square that the 10 embodied holiness in everyday life and said the church needs to embrace this idea rather than an unattainable ideal of personal achievement.

“Holiness does not consist of a few heroic gestures, but many small acts of daily love,” he said from his chair at the altar.

Francis, 85, has complained of strained ligaments in his right knee for months and has recently been seen in a wheelchair at public hearings. Sunday’s ceremony was evidence that Francis can still walk, but he appears to be taking things as slowly as possible to let ligaments heal before an intense period of travel starting in July: the Vatican has confirmed two trips that month, one to Congo and one to South Sudan and one to Canada.

It was the first canonization mass at the Vatican since before the coronavirus pandemic and, in addition to last month’s Easter celebrations, drew one of the largest crowds in recent memory.

The Italian president, the Dutch foreign minister, the French interior minister and the Indian minister for minorities, as well as tens of thousands of worshipers filled the sun-drenched square, which was adorned with Dutch flowers in honor of Reverend Titus Brandsma , a holy martyr. who was murdered in the Dachau concentration camp in 1942.

In the run-up to the canonization, a group of Dutch and German journalists formally proposed that Brandsma become co-patron saint of journalists, along with Saint Francis de Sales, given her work combating propaganda and fake news during the rise of fascism. and Nazism. in Europe. According to an open letter sent to Francis this month, journalists noted that Brandsma successfully defended a ban on printing Nazi propaganda in Catholic newspapers. There has been no immediate response from the Pope.

In addition to Brandsma, the new saints include the 18th-century Indian convert Lazarus, also known as Devashayam, who mingled with India’s lower castes and was deemed a traitor by India’s royal palace, which ordered his arrest and execution in 1752.

“He is for poor people,” said Arachi Syril, an Indian pilgrim from Kanyakumari who was in the plaza for mass. “He hated the caste system, it still goes on, but he is the martyr for it”, Syril said.