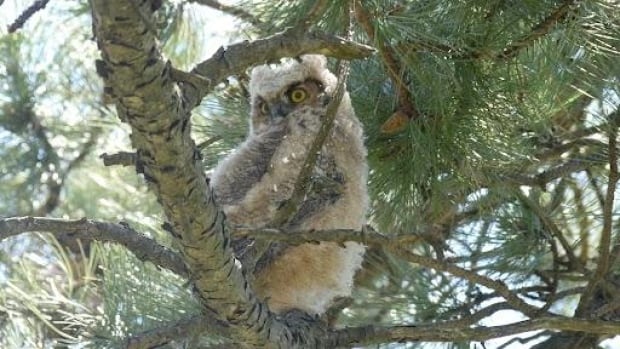 There is a tree in Ottawa that has been surrounded by people for the last few weeks, but it is not the attraction. Rather, it is a nest of great horned owls that makes people flock to the site.

Photos of the owls are appearing on social media, and that could put the fluffy chicks’ survival at risk, according to Melissa Groo, a New York state wildlife photographer.

Groo, who also consults on wildlife photography ethics for the National Audubon Society, said many wildlife-focused Facebook groups have stopped posting photos of owls, or at least their locations, because of this risk.

Owls and other birds can also become stressed if people take too long to get the best shot, he said.

“One of the things I would try to remind people of is that these are just photos for us. But for a wild animal, every moment is about survival.”

That’s why the Friends of Mud Lake Facebook group blocked posts with the word “owl” early in the pandemic.

David Stibbe created the group for the Britannia Conservation Area after a different problem, but the site has seen the number of wildlife photos grow tremendously in recent years.

Mud Lake used to be home to a pair of great horned owls, Stibbe said, but not anymore.

“I would literally see 30, 40, 50 people with cameras there every day, and they’d go off the beaten path and blaze new trails,” Stibbe said.

“It ended up being almost like paparazzi for a celebrity, when [the birds] They show up in a major urban center and everyone knows where they are.

The presence of the great horned owls caused things to deteriorate, Stibbe said, due to “a few bad apples.”

“People were starting to bait the birds to come down and fly, [by] throw away dead mice Whatever, it happened.”

Stibbe said he is looking forward to plans being developed by the National Capital Commission for the area that would lock visitors into a railed path, as the ecosystem is quite fragile.

In it Audubon’s Guide to Ethical Bird Photography and Videographyto which Groo contributed, respect for a bird’s habitat is paramount.

The guide recommends against trampling on vegetation or moving branches away from a nest, as these provide important camouflage.

It also suggests against using flash photography, especially for nocturnal birds like owls, as it can “temporarily limit their ability to search for food or avoid obstacles.”

For Groo, the easiest way to ensure a bird’s comfort is to maintain a minimum distance of eight meters.

“This is not really a great opportunity for an iPhone shot,” he told CBC Radio. ottawa morning.

ottawa morning5:19How to photograph owls in the wild without being a jerk about it.

Bird watchers are excited about a great horned owl and her young nesting in a tree along the Ottawa River. But the behavior of some birders is ruffling the feathers of a wildlife conservation photographer.

Another way to judge the correct distance, the guide says, is by the bird’s reaction to you. If they are flying or freezing, you are too close.

Owlets in this fluffy stage are testing their wings, Groo said, but still rely on their parents for food. People could scare parents.

He also said that you have to consider where you are seeing them.

Groo referenced an incident in Washington state a few years ago, when a northern hawk-owl was discovered on private property and word spread.

People camped out with binoculars focused on the person’s property, until one day it was discovered that the owl had been shot to death.

“It was very likely that the owner of the house had killed the owl because he was feeling very aggrieved and disturbed,” Groo said.