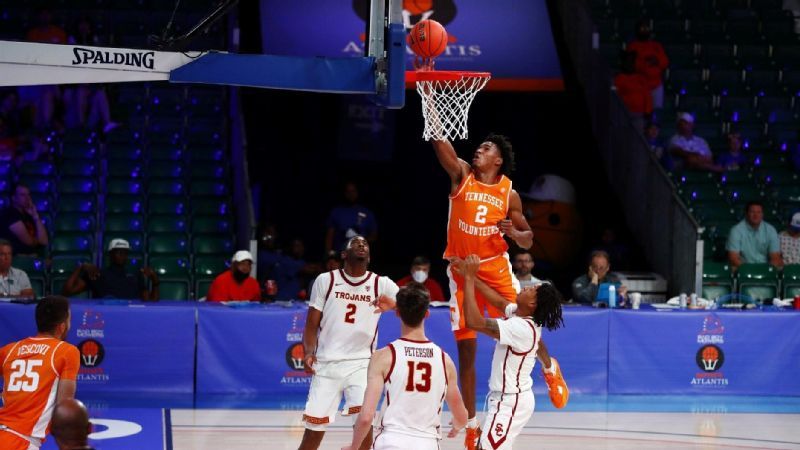 PARADISE ISLAND, Bahamas – No. 22 Tennessee prevailed in a back-and-forth affair Thursday in the Battle 4 Atlantis semifinals, beating USC 73-66 in overtime.

Tennessee and USC went back-and-forth in the first three minutes of overtime, as Trojan guard Boogie Ellis’ baseline jumper tied the score at 66 with 2:09 left in OT.

On the next trip down the court, Santiago Vescovi hit a 3-pointer from the wing and the shot clock wound down to give the Vols a 69-66 lead.

From there, Tennessee forced three straight USC turnovers and Zakai Zeigler went 4-for-4 at the line to seal the victory.

Freshman Julian Phillips paced the Vols offensively all game, finishing with a career-high and game-high 25 points on 7-for-13 shooting. He also grabbed eight rebounds and was 10-for-12 at the free throw line.

Olivier Nkamhoua also scored in double figures for the Vols, recording a 12-point, six-rebound performance on 5-for-8 shooting.

With Tennessee trailing 62-60 with just over a minute to play in regulation, Phillips found Nkamhoua on the block for a contested layup that tied the game.

On the ensuing possession, the Vols forced a missed USC 3-pointer and Phillips grabbed a rebound with 34 seconds left. Tennessee had a chance to win the game in the closing seconds, but Vescovi’s 3-point attempt fell short.

After holding Tennessee to a three-point lead at halftime, USC threatened to pull away with the Vols going 11-4 in the first five minutes of the period to take a four-point lead at 45 in the second half. -41.

As he did many times throughout the game, Phillips responded to drive to the rim for a one-and-one layup that started the Vols’ 10-0 Tennessee run and put the Vols back in control.

After USC capped a run on a jumper from Tennessee’s Kijani Wright, the two teams played the rest of regulation in an eight-point window — with neither team leading by more than four points.

Tennessee led for most of the first half and took a 37-34 lead into halftime.

The Vols extended their lead to eight points with 1:13 left in the opening period when Mashak stole USC’s inbounds pass, took the ball the length of the floor and nailed a one-and-one to put Tennessee ahead. 37-29.

However, USC responded and scored the final five points of the half, including a 3-pointer by Boogie Ellis to bring the Trojans within three points.

After a slow offensive start to Wednesday’s opener against Butler in the Bahamas, Tennessee came out of the gate Thursday faster — shooting 42 percent from the field in the first half.

Phillips, who scored 11 points against Butler on Wednesday, matched a career high with 13 points on 4-for-7 shooting in the first half alone.

With the win, Tennessee advances to Friday’s Battle 4 Atlantis championship game against No. 3 Kansas, which defeated Wisconsin 69-68 in overtime on Thursday. Tip-off is set for approximately 7:30 PM ET on ESPN.