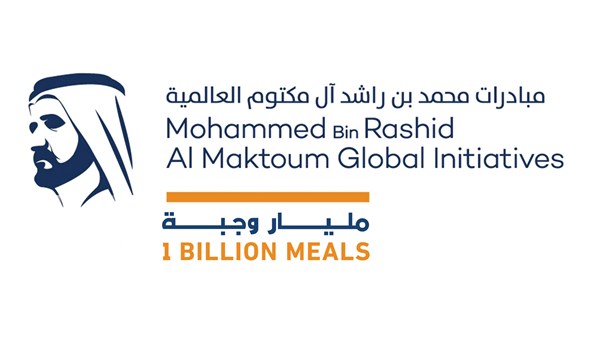 The “Billion Meals” initiative, the largest in the region to provide food support to the needy and poor, has made contributions equivalent to 420 million meals so far, to complete its journey since the month of Ramadan last year, in a result Outstanding Emirati values ​​of giving, and a comprehensive community response to the call of His Highness Sheikh Mohammed bin Rashid Al Maktoum, Vice President and Prime Minister of the UAE and Ruler of Dubai, to provide aid and food to the hungry . This was confirmed by His Excellency Mohammed bin Abdullah Al Gergawi, Secretary General of “Mohammed bin Rashid Al Maktoum Global Initiatives”, with the value of donations and contributions to the “One Billion Meals” initiative, which began at the beginning of the holy month of Ramadan , to 200 million dirhams in 3 weeks, to which 220 million are added. A meal was distributed last year, bringing the total to 420 million, and distribution operations began in several countries, including Nigeria, Sudan, Albania, Jordan. , Kyrgyzstan, Lebanon, India and Kosovo. The “One Billion Meals” initiative has so far registered 232 thousand individual donors, after it opened the door to contributions and donations to everyone at the beginning of the holy month of Ramadan, registering an immediate social interaction with the theme of the challenge of hunger, which represents a global humanitarian crisis.

Because food is a basic human need
His Excellency said: “Participation in donations to the One Billion Meals initiative, which provides relief to those in need in 50 countries, confirms comprehensive support for its core idea of ​​providing food as a basic human need. The flow of Everyone’s contributions to the initiative is a qualitative response to His Highness Sheikh Mohammed bin Rashid Al Maktoum’s call to dedicate the UAE’s commitment to humanity.”
His Excellency emphasized that the Billion Meals Initiative launched by His Highness Sheikh Mohammed bin Rashid Al Maktoum, along with the Month of Giving and the Season of Giving, constituted a comprehensive social movement, in which white-handed owners and benefactors and Pioneers of humanitarian and social work contributed and formed a model for giving to the UAE community by supporting the efforts of the region’s largest campaign to feed hungry people in 50 countries around the world.

Human solidarity and responsible interaction
Al Gergawi praised the spirit of human solidarity and the high sense of responsibility shown by the UAE society in all its categories and segments towards the destitute and the needy, who look to their fellow man for a safety net to protect them from repercussions of food insecurity Al Gergawi praised innovative new initiatives in support of the campaign launched by individuals, institutions and businesses in the UAE community, and played a key role in accelerating the achievement of the “one billion meals” goals and reach the equivalent of 420 million. foods. His Excellency Al Gergawi also highlighted that the charity auctions in support of the “Billion Meals” initiative gave it an extra boost and provided a creative way to expand the reach of humanitarian work and innovation in it, in addition to the multiple approved channels of donation provided. for the initiative from its inception to involve everyone in charitable and humanitarian work.

finish line
His Excellency Al Gergawi expressed his confidence that the UAE society, its economic activities, its governmental, private and charitable institutions, and the pioneers of charitable and humanitarian work will continue to actively contribute to the largest initiative of its kind in the region until it reaches its ultimate goal of providing one billion meals to millions of people and families around the world.
His Excellency concluded by saying: “Billion Meals contributors today feed food, embody the month’s values ​​of feeling the suffering of others and contribute to achieving the goal of ending hunger within sustainable development. objectives of the United Nations, and renew hope in the solidarity of man with his fellow man in times of crisis and adversity, and send, as His Highness Sheikh Mohammed bin Rashid Al Maktoum said, one billion humanitarian messages from the Emirates to the world .

donations continue
The “Billion Meals” initiative continues to receive donations from institutions, individuals, business sectors, companies and charities through four approved channels, which are the website.
www.1billionmeals.ae
And bank transfer to the account of the “One Billion Meals” initiative on the approved account number: AE300260001015333439802 in Emirates NBD in UAE dirhams, or by donating one dirham per day to the initiative through a monthly subscription by sending a message text with the word “comida” or “Meal” to the number 1020 for users of the “Meal” du network or to the number 1110 for users of the “Etisalat” network within the country, or by contacting the call center of the initiative “One Billion Meals” at number 8009999.

UNHCR is a partner of the initiative
The “Billion Meals” initiative, the largest of its kind in the region to provide food support to the poor and needy, is supported by the United Nations High Commissioner for Refugees, in addition to a group of international operational partners, regional and local governments with whom it is cooperating to reach the equivalent of one billion meals for the most disadvantaged, especially children, refugees, displaced persons and those affected by humanitarian crises and natural disasters in 50 countries. UNHCR, caring for tens of millions of refugees around the world, joins the group of operational partners of the “Billion Meals” initiative.
Khaled Khalifa, Representative of the United Nations High Commissioner for Refugees in the Gulf Cooperation Council and adviser to the High Commissioner, said: Our partnership with the “One Billion Meals” initiative aims to alleviate the suffering of refugees who are forced to leave their homes and lost everything… This partnership is an extension and expansion of our cooperation with the initiatives of Mohammed Bin Rashid Al Maktoum International, who achieved qualitative success in the 100 Million Meals campaign he organized last year .
Sarah Al Nuaimi, Director of Mohammed bin Rashid Al Maktoum’s Office of Global Initiatives, said: The partnerships of our initiatives at the regional and global levels have one goal, which is to achieve the impact of humanitarian action to the greatest extent possible and to ensure access to the largest possible segment of beneficiaries worldwide.

“Dubai Charity”: the most important humanitarian initiatives worldwide
Ahmed Al Suwaidi, Executive Director of the Dubai Charity Association, emphasized that the blessed month of Ramadan is an important occasion to intensify community support initiatives and support for various groups in society, providing help to needy categories of families who they deserve, through the adoption of humanitarian initiatives. and community activities targeting these groups, describing the Zayed Day for Humanitarian Action, which is an approach taken by all charitable work institutions, in commemoration of the work of the founder of the state, the late Sheikh Zayed bin Sultan Al Nahyan, may God Rest your soul, which inspired humanity in generosity, love of good and humanitarian work.
Al-Suwaidi highlighted that the “Billion Meals” initiative is one of the most important humanitarian initiatives worldwide, because it affects a large segment of people inside and outside the country.

5 million dirhams from Aldar Properties
Aldar Real Estate Company announced that it will provide 5 million dirhams in support of the “One Billion Meals” initiative.
Contributions from individuals, institutions, charities, economic and community events, and various components of the business and corporate sectors support the provision of staple foods needed to provide direct food support through the “Billion Meals” initiative to those who deserve it in its place. .
The donation from Aldar Properties, which specializes in integrated real estate development solutions and innovations in the UAE and the region, helps support the efforts of the “Billion Meals” initiative, to provide food support and food packages for beneficiaries directly on the bottom. income of the communities covered by the initiative.