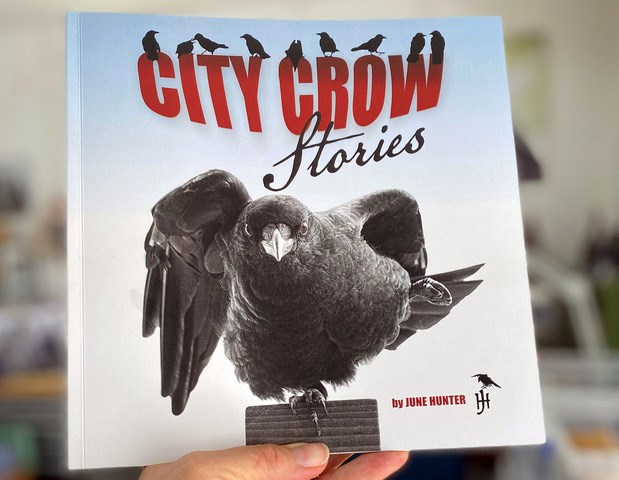 After years of watching her flying friends, June Hunter and the ravens are birds of a feather.

June Hunter knows her ravens. From cloudy-eyed Mabel to White Wing (who sports a pale feather), Hunter has spent countless hours with the birds in his East Van neighborhood. The motley crew of corvids inspired Hunter to write her new book, Crow stories of the cityavailable online to reserve now.

Memories partly interwoven with tidbits of science and worldly wisdom, Crow stories of the city profiles the seven birds Hunter sees most frequently on his thrice-daily walks.

In addition to Mabel and White Wing, Hunter’s book features stories about Mr. Walker, who dutifully follows for the occasional peanut; Marvin and Mavis, a matched couple who live right outside their front door; Benjamin with his foot bent backwards; and Pearl, which reminds Hunter of Vermeer’s Girl with a Pearl Earring. Hunter’s own photography accompanies the narrative that spans 15 years of birding.

“I want to encourage people to appreciate the nature that is right next to them right now,” says Hunter. “If we could appreciate our bird neighbors, we would all be better off.”

Connect with ravens by spending more time outdoors and simply watching their antics. This is how Hunter became acquainted with the black-winged neighbors of his. His patient observation has paid off: Hunter can even tell jet-black birds apart based on their location, behavior, and small distinguishing features. She considers her time with the Ravens a privilege she didn’t enjoy before moving to Vancouver.

“I grew up in an industrial place. I was deprived of birds as a child,” she says. “Now, each bird seems like an incredible luxury to me.”

If Hunter’s book sparks a latent fascination with ravens in you, she suggests you take a trip to their nest in Still Creek.

“I like to go out when I’m feeling a little down about something. I find the energy of the raven to be exhilarating, it’s like feeling a tide in the ocean.”