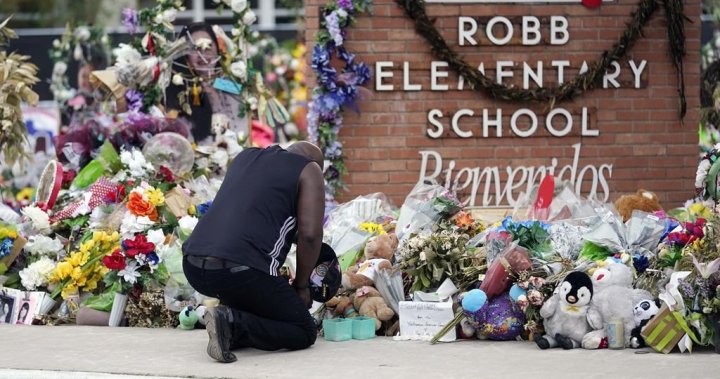 A massive but uncoordinated and chaotic police response. An “unfortunate” culture of non-compliance in school safety regarding the basics of locked doors. Online signs of impending violence from the shooter.

The long-awaited report from the Texas House of Representatives on the May 24 shooting at Robb Elementary in Uvalde that killed 19 fourth grade students and two teachers extended the blame for the failed law enforcement response beyond the previous stories. He also questioned the security protocols at the school and delved deeper into the background of the shooter.

Here are the main findings of House’s investigation:

Another violent weekend leaves US on edge after shootings kill 8

The report noted a massive but inept response from heavily armed local, state and federal law enforcement. That began moments after the shooter crashed his truck onto the school grounds and entered the building, then continued through the excruciating inaction that went on for more than an hour, even as parents begged officers to do something and dispatchers answered 911 calls from inside classrooms.

“At Robb Elementary, law enforcement officials failed to adhere to their active shooter training and failed to prioritize saving the lives of innocent victims over their own safety,” the report says.

Although much of the criticism has been directed at the Uvalde School District police, the report blamed all responding agencies, spreading the blame much further than previously suggested.

Nearly 400 law enforcement officers rushed to the school, most state and federal officers, only to spend a chaotic hour in which no one seemed to take charge. Pete Arredondo, the Uvalde Schools police chief who has received more scrutiny than any other officer on the scene that day, failed to establish himself as the incident commander and did not transfer that responsibility to anyone else, according to the report.

And yet, no other officers stepped in to take charge, despite an “atmosphere of apparent chaos,” according to the report.

While the initial first responders on the scene “acted appropriately in attempting to enter the classrooms and apprehend the attacker,” they were driven back by gunfire. They lost critical momentum by treating the scene as a “barricaded shooter” instead of an “active shooter.”

The report noted that the initial response may have lacked urgency given the frequency of school closures in recent months as law enforcement went after suspected human smugglers smuggling migrants into the country. In some cases, traffickers crash vehicles and passengers flee in all directions.

The school district had about 50 such alerts between February and May 2022. That frequency of less serious alerts in Uvalde “diluted the importance of the alerts and decreased everyone’s readiness to act,” the report concluded.

“The initial reaction from many administrators, teachers, and law enforcement officers was that it was probably a less dangerous situation,” the report says.

Even Arredondo and another responding officer said they considered that possibility when they didn’t see the victims immediately after they entered the school.

Whether the school gates were properly locked and could have delayed the shooter’s unimpeded entry has been a key question since the day of the shooting.

Robb Elementary had recurring problems with lock and door maintenance, and the school had a “culture of noncompliance” regarding locked doors, “which proved fatal,” according to the report.

The door the shooter used to enter the building was not locked as it should have been, and the door to one of the classrooms he entered was likely unlocked, according to the report. The teacher, the principal, another school employee, and many fourth graders knew that the lock in that room was not working properly. No work order was placed to fix it.

TRACKS OF VIOLENCE OF THE SHOOTER

The shooter had given some hints of impending violence in the months and days leading up to the shooting.

A year before the shooting, he was showing an interest in bloody and violent sex online and, at one point, was carrying a dead cat. While playing online games, he would get angry when he lost and threaten others, especially women. He also shared a growing fascination with school shootings, eventually earning the nickname “school shooter” on an online platform.

The report says a “vague idea” for a school shooting appears to have taken hold in late 2021 and accelerated after the shooter had a fight with his mother in early 2022.

Several members of the family knew that he was separated from his mother and that he had asked for help to buy weapons, the so-called “bogus purchases” that would have been illegal. They refused, but later learned that the week between his 18th birthday and the May 24 attack, he had purchased firearms legally and that his grandparents insisted that they be removed from his home.

“Prior to the shooting, the shooter had no criminal record and had never been arrested. He is not known to have espoused any ideology or political viewpoint of any kind. Only private individuals were aware of the many warning signs,” the report says.

While much of the investigation initially focused on local and state law enforcement agencies, the report noted that the US Border Patrol had 149 officers responding to the scene, by far the most of any agency.

And while the Border Patrol tactical unit led the final breach of the classroom to finish off the gunman, the report noted that Border Patrol officers were among those waiting to act.

The Border Patrol tactical team commander waited for a bulletproof shield and a working master key for a classroom door that weren’t even needed before going in and killing the attacker, the report said.

The committee was told that none of the Border Patrol agents involved in opening the classroom door were wearing activated body cameras. The investigative committee spoke with the tactical team’s acting commander, Paul Guerrero, but the Border Patrol was not among the agencies that gave public testimony at the Texas House and Senate hearings last month.