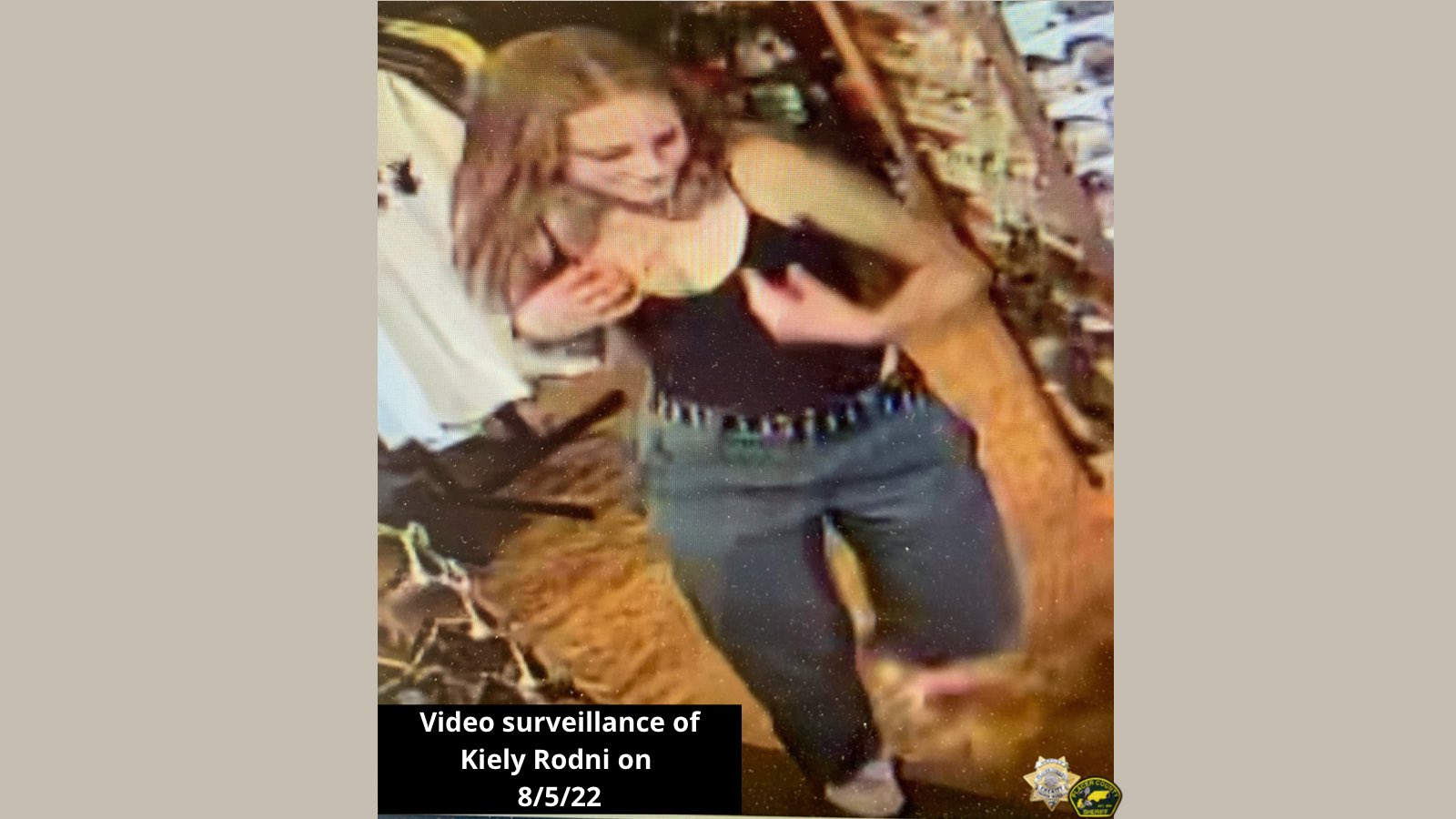 Kiely, 16, was last seen between 12:30 a.m. and 1 a.m. on August 6, near the Prosser Family Campground, about 10 minutes north of Truckee. According to the Placer County Sheriff’s Office, she was attending a party “of more than 100 minors and young adults.” Her vehicle, a silver 2013 Honda CRV, is also missing, and her phone has been out of order since she went missing. The sheriff’s office and the FBI are treating the case as a possible kidnapping because Kiely’s vehicle is still missing.

The sheriff’s office has shared several new photos over the past day. On Tuesday night, the sheriff’s office threw a still caught on surveillance cameras at an unidentified local Truckee business. Detectives found the images after contacting businesses in the area.

Kiely is seen wearing a black suit and dark green Dickies pants. The image was captured at 6:08 p.m. on August 5, a few hours before she headed to the camp party.

At a news conference Wednesday afternoon, the sheriff’s office released two new images: one of a hoodie Kiely is believed to have borrowed at the party and another of her missing vehicle. In a strange coincidence, the front of the black hoodie has a few lines of poetry from singer Lana del Rey. She says, “You don’t want to be forgotten. You want to disappear.”

“We don’t know if Kiely was wearing that hoodie when she disappeared, but we believe it was still in her possession,” the sheriff’s office said in a statement.

The photo of Kiely’s Honda CRV was taken during the winter when it was snowing:

There are conflicting accounts of Kiely’s plans for the night. According to a friend who attended Prosser’s party, Kiely intended to spend the night at the camp, along with many other attendees. But Kiely’s mother, Lindsey Rodni-Nieman, said she received a text from Kiely saying she would be “straight home” in about 45 minutes.

“I told her to take care of herself and that I loved her. And she was like, ‘It’s okay, mom, I love you too,'” Rodni-Nieman told ABC News. “She never came home.”

Search and rescue teams fanned out across the region looking for any sign of Kiely, with volunteers meeting every morning at the Truckee Community Recreation Center to coordinate efforts. A helicopter was deployed for aerial sweeps along the I-80 corridor between Donner Summit and the Nevada border, and on Tuesday and Wednesday, marine units from three local sheriff’s offices searched the Prosser Creek reservoir for water.

“The only lead they have is Kiely’s last known location before she went missing,” the Placer County Sheriff’s Office said in a statement Wednesday morning.

Kiely is 5 feet 7 inches and weighs 115 pounds and has blonde hair, hazel eyes and a nose ring. She has multiple piercings and a tattoo of the number 17 on her ribs. Her silver Honda CRV has a California license plate of 8YUR127. Kiely’s family runs the Lost Trail Lodge in Truckee, about a 12-mile drive from Prosser’s camp.

Anyone with information about Kiely’s disappearance is asked to immediately contact the Placer County Sheriff’s Office tip line at 530-581-6320, option 7. Callers are welcome to remain on the phone. anonymity. Tips can also be sent to [email protected] The sheriff’s office says it has received about 300 tips so far.