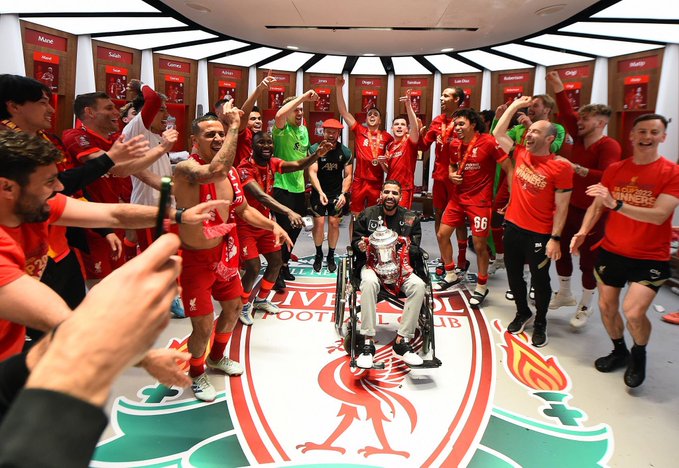 The Egyptian star, Mohamed Salah, wore the most beautiful human postures and repaired the thoughts, with what he did after his Liverpool team beat Chelsea in the FA Cup final for the eighth time in its history, after inviting the former player of the Al-Ahly Moamen Zakaria. to the match and celebrated the cup title with him.


Liverpool managed to crown their second title by defeating Chelsea 6-5 on penalties in the final played at London’s Wembley Stadium, and Mohamed Salah, who was injured in the first part of the game due to injury, had a great attitude humanitarian and the most beautiful positions of repair when he invited a player, the former Egyptian of Al-Ahly Moamen Zakaria, without anyone knowing and making him celebrate with the Liverpool players inside the locker room, and all the players surrounded the player from Al-Ahly, who was in a wheelchair, happy with this wonderful situation.

The video, which was widely spread through social networks in various countries around the world, received high praise for the position of the Egyptian player, taking the matter to the Egyptian Dar Al Iftaa, who officially commented on the position of the Egyptian player through his official account on the “Twitter” website and said: “Humanity before religiosity and true humanity is morality.” And the repair of thoughts and morals is not limited to sport… Rather it is a way of life.”

Liverpool had won their second title this season, waiting for the fateful final match against Real Madrid, as well as waiting for Manchester City to stumble to try to crown the League title.

Humanity before religiosity and true humanity is ethics and reparation of thought and morality is not limited to sport, but is a way of life. pic.twitter.com/BCG23faww2