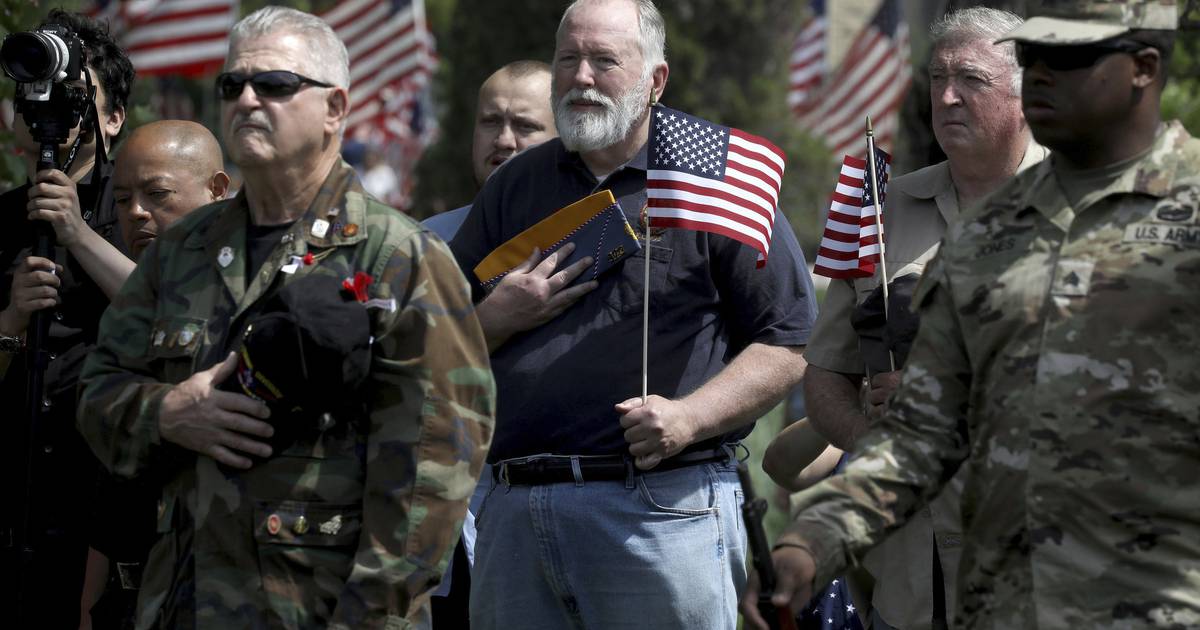 Thank yous for paying your respects to the fallen and their families were abundant from past, present and future servicemen at the 58th annual Memorial Day parade at Rosehill Cemetery on Monday.

The Balson family, Pierre, his wife Lenore and their 3 1/2-year-old son Sebastien, were on their front lawn on West Rosehill Avenue enjoying the community camaraderie that has been absent since the pandemic began.

“It’s great to have him back,” said Pierre Balson. “I love being outside, hanging out with the neighbors. It’s the best part of Memorial Day, everyone talking to each other, enjoying the day. It’s also a beautiful parade, amazing to see the ROTC kids. It’s also great to see a lot of the veterans.”

Members of the Edgewater Baptist Church attended, enjoying lawn chairs provided by residents of the block for the annual event. Krista Muscat, a deacon with the church’s Benevolence Fund, says a contingent from her church has been attending for the past decade.

“We enjoy going out and being with the community,” he said. “It’s a true neighborhood small town parade.”

First-time parade attendee and Vietnam War Army veteran Richard Zaber attended because he was moved by the memorials he had seen on television the night before. His friend, Judith Jakaitis, who lives a couple of blocks from the parade route, invited him to enjoy the parade.

The parade, which featured members of the local Scout troop, dozens of members of the Lane Tech High School ROTC Warrior Battalion and the 355th Agent Chapter of the Daughters of the American Revolution Culper Ring, made its way from West Rosehill in Clark Street through the stately limestone driveway. to the cemetery They marched down lanes lined with 180 American flags, placed with the help of 30 students from ASPIRA Early College High School in Avondale.

Many people followed the parade to the cemetery grounds for a ceremony of thanks. With temperatures approaching the 90s, many stood in the shade as the wind blew flags into the hands of attendees and throughout the venue. As the Rev. Jerome Kowalski said during the invocation: “Every time you see a flag wave, it indicates the last breath of an American who gave his life so that we may continue to be the land of the free and the home of the brave. ”

A resounding amen went out from the crowd.

Marcos Torres, commander of Sergeant Jason Vazquez Post 939 of the American Legion, then addressed the crowd, encouraged by the number of people present to watch the ceremony since the pandemic. For him, every day is Memorial Day.

“Understand that the service does not end with the contract. It is a lifestyle and ongoing,” she said. “We have a duty and a burden of responsibility to those who came before us to serve our community and be pillars and leaders in our community whether we like it or not, that is who we are. It’s in our DNA, we didn’t choose it.”

American Legion Post 973 Tattler Second District Commander Brent Webb, who served in the Air Force from 2006 to 2012, invited people to meet those at their neighborhood Legion posts.

“The American veteran represents a cross-section of all walks of life in America, more perfectly than any other institution in our nation,” he told the crowd. “You don’t see the same in Congress, you don’t see it in our communities, as segregated as they may be. But you see it in the US veteran population.

American veterans are not a monolith, we are individuals who decided we wanted to serve. And… for anyone who served, it’s a service that continues. We are a community of people trying to serve our community, and no one does that better than an American veteran.”

Northwest Side Ald. Gilbert Villegas, 36th, and North Side Ald. André Vásquez, 40th, was present. Vasquez urged residents to remember those we have lost and those who have returned with physical and mental trauma. Villegas, chairman of the veterans caucus at the City Council, reminded everyone that “freedom is not free.”

“All of us veterans took an oath to defend this country from all enemies, foreign and domestic, and ladies and gentlemen, that oath has no expiration date,” he said.

“When we talk about honoring our soldiers, let us imagine the day when we will have achieved what we have fought so hard for: a world of peace in which we no longer need soldiers,” Vásquez said. “Let us be comrades in peace as neighbors just as our veterans have been comrades in arms. Let’s commit to that promise on this and every Memorial Day.”

Dating back to the 1930s and 1940s, the service has been organized by an AMVETS group for the past 55 years, said Michael Weidman, family services manager for Dignity Memorial. He said Rosehill Cemetery has a veteran from every conflict the United States has fought, including the Revolutionary War. Weidman, who has led the service on behalf of the cemetery for the past six or seven years, said 1,000 to 1,500 people attend annually. He said that he is happy to be able to give thanks to those who have done the things he has not done.

The Chicago Light Artillery Battery A closed the service by firing a Civil War cannon three times. Former Commander William Kummerow has been a part of the ceremony for 34 years. Wearing woolen garments as a union commander, he already looks forward to Veterans Day, when he says people will don uniforms from all the different wars.

“Rosehill Cemetery predates the Civil War by about 14 months,” Weidman said. “For 163 years we have been here and from the beginning cemetery leaders set aside the most elite property for the graves of Civil War veterans, and that was the beginning of our relationship with veterans.”