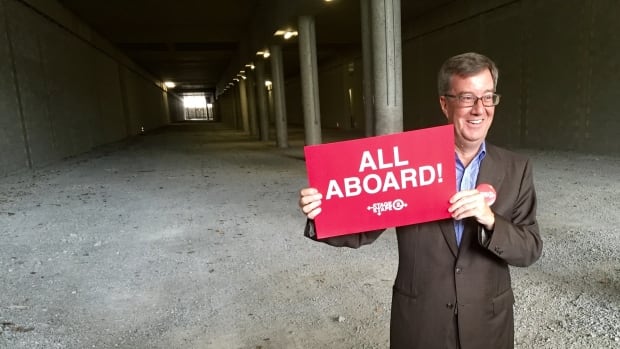 When Jim Watson promised during his 2010 mayoral campaign that the first part of Ottawa’s light rail line would arrive on time and on budget, he probably couldn’t have imagined that the banal political slogan would become the centerpiece of a public inquiry a dozen years later. .

But Watson’s insistence during that campaign that Stage 1 of the Confederation Line be kept at a price tag of $2.1 billion, even though the figure was a preliminary estimate, has been one of the focal points in the early days. of the long-awaited LRT Public Inquiry.

It was a key line of questioning Wednesday of former deputy city manager Nancy Schepers by the commission’s co-leading attorney, John Adair.

Adair pointed to a 2009 report for the board by Schepers, an engineer, that showed $2.1 billion was an early estimate and could rise or fall by as much as 25 percent as more details were confirmed.

But once Watson began campaigning with a $2.1 billion price tag, that number took on a life of its own, the attorney argued.

“My simple point is that Mr. Watson, as he was then, and the other council members who ran on that $2.1 billion platform, on time, on budget, were making the promise to the public that you, as a seasoned pro, they weren’t prepared to do the advice, were they?” Adam asked.

“In the absence of estimates, I agree,” Schepers said. “Yes.”

But she also told Adair that she wasn’t too concerned about Watson’s political mantras, which she had heard before.

Delving into the first decisions of the city

The first three days of the four-week investigation have revealed a number of central issues that the commission appears keen to examine, from whether politics unduly constrained budgets and timelines to whether contract details ultimately fell through.

Rob Pattison, who headed the Ontario Infrastructure LRT division, says he was concerned the budget was too low for companies to meet and would generate few or no bidders for the project.

The investigation has heard several times how the budget cap was a potential problem and several key players testified that they were concerned that no one would bid at that price.

On Tuesday, another attorney for the commission asked the former city treasurer if there had been any discussion about whether the price cap might lead businesses to “over-promise” to meet the budget.

Political pressure over the budget and schedule aren’t the only ways investigating attorneys have investigated whether city decisions, made even before the contract was awarded, contributed to the Confederation Line’s problems.

One of those decisions? Go with a public-private partnership, or P3 model, in your contract with Rideau Transit Group (RTG).

Confederation Line was the first time this funding model had been used for a municipal LRT project in Ontario, the consultation heard.

That’s why provincial officials, including Watson, who had just left Ontario’s Liberal cabinet in late 2009, wanted Ontario Infrastructure to advise the city on crafting the contract.

The ideas behind the payment plan

One of the key components of this type of transit financing model is that the winning proponent designs, builds, and maintains the system, but also bears part of the financing.

In the case of the Confederation Line contract, RTG assumed $300 million in private financing, which the city would repay as part of its monthly rate payments under the 30-year maintenance contract.

This private financing actually costs the city, because a municipality can generally borrow at a much lower rate than corporations. In 2012, the city estimated that it would pay $165 million more in interest over 30 years than if it had borrowed the money.

(Interestingly, the investigation heard on Wednesday that in May 2011, the city did not contemplate including private financing in its contract, unless the other levels of government paid the extra cost. They did not, but the city opted for a project of design and construction). -fund-maintain, or DBFM, model anyway).

Even though it’s more expensive for the city, advocates of public-private partnerships say private financing gives the company an added incentive to finish on time because payments don’t start until the project is delivered.

The arrangement is supposed to create a healthy “tension” that drives companies to stick to the project schedule.

But Adair argued that once the project was delayed for more than a year, the model deprived RTG of much-needed cash.

Until it delivered the light rail system, RTG would not receive its final milestone payment of more than $200 million, while costs, including $300 million in debt service, continued to mount.

“RTG was under enormous financial pressure because of the model,” Adair told Schepers, suggesting the consortium was being “financially assassinated.”

Schepers responded, arguing that RTG’s partners (SNC-Lavalin, ACS Infrastructure and Ellis Don) were big players who should have known what they were doing.

Still, Adair argued, RTG couldn’t afford to keep pushing back its delivery date, but at the same time, it couldn’t ask the city not to enforce the contract because “it’s not an option” under the model.

“The guiding principle at all times has to be to look at what is best for the people of Ottawa, regardless of what the contract says,” Adair suggested to Schepers, who only allowed that there should be flexibility.

Wednesday was not the first time this week that commission attorneys have suggested that the city honoring the contract, or at least enforcing it in its strictest sense, has been detrimental not only to RTG’s partners, but also to the Ottawa people.

On Friday, former RTG CEO Antonio Estrada will testify about, among other things, how the city handled the Rideau Street sinkhole.

First, on Thursday, Yves Declercq of train manufacturer Alstom and Manuel Rivaya of OLRT Constructors are scheduled to appear.