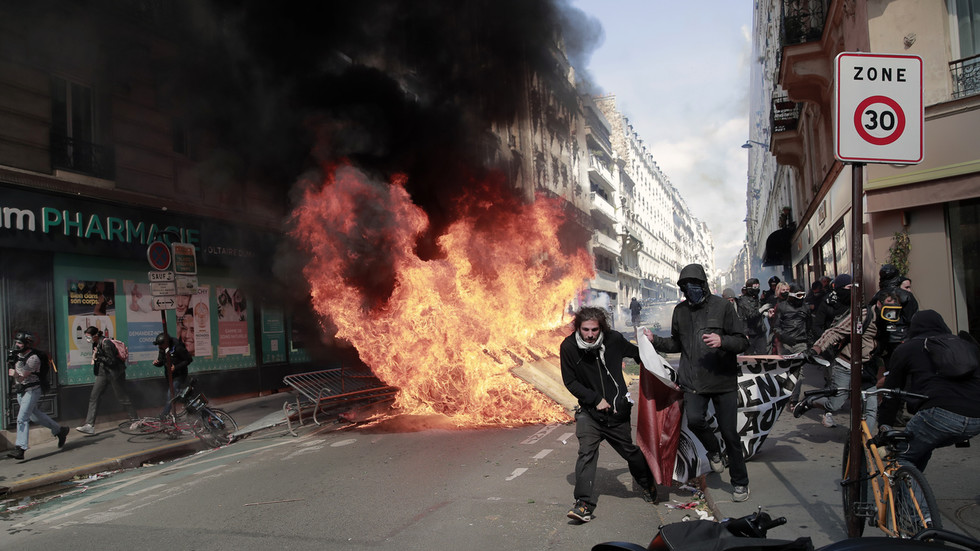 Thousands of protesters filled the streets of Paris on Sunday to mark May Day, an annual day of demonstration by socialists and unions. With masked ‘black bloc’ anarchists in the crowd, violence and vandalism soon followed.

At least 5,000 police officers were deployed in the streets of the French capital, backed by armored vehicles and water cannons. This year’s protests came a week after French President Emmanuel Macron’s re-election, and with around 250 demonstrations planned in the city alone, union leader Philippe Martinez called on citizens to “go out on the street” and make the protests “as massive as possible”.

Amidst crowds of peaceful protesters, groups dressed in black and wearing masks soon clashed with police. Tear gas was fired and video footage showed officers tackling suspects to the ground, while another clip showed a group of heavily armored officers charging protesters who hurled projectiles at them.

Rioters vandalized a McDonald’s, before police arrived to protect the restaurant, and other businesses, including banks, insurance companies and at least one real estate office, were also attacked.

PARIS – Barriers serve as a battering ram to degrade a bank. Lots of downgrades, no police intervention that seems to let it go. #1erMaipic.twitter.com/3Ac6VvEmdO

Protesters piled construction materials and rubbish in the streets before setting fire to these barricades. Some of the fires released choking clouds of black smoke into the air.

It is unclear how many people have been arrested so far. Protests have also taken place in several French cities, including Lille, Nantes, Toulouse and Marseille.