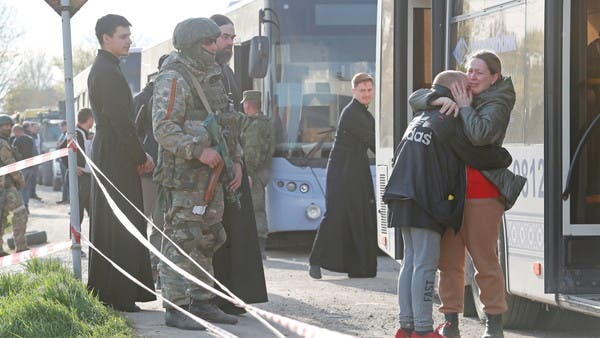 Huddled in the labyrinth of Soviet-era bunkers far below the great Azovstal steel mill, Natalia Usmanova felt her heart stop at how terrified she was when Russian bombs rained down on Mariupol, showering it with concrete dust.

Usmanova, 37, spoke to Reuters on Sunday after being evacuated from the plant, a sprawling complex founded by Josef Stalin and designed with an underground network of bunkers and tunnels to withstand attacks.

“He was afraid that the bunker would not withstand him, he was terribly afraid,” Usmanova said, describing the time she spent sheltering underground.

“When the bunker started shaking I was hysterical, my husband can attest to that – I was so worried the bunker was going to collapse.”

“We didn’t see the sun for so long,” he said, speaking in the town of Bezimenne in an area of ​​Donetsk controlled by Russian-backed separatists about 30 km (20 miles) east of Mariupol.

He remembered the lack of oxygen in the shelters and the fear that had taken over the lives of the people huddled there.

Usmanova was among dozens of civilians evacuated from the plant in Mariupol, a southern port city that has been besieged by Russian forces for weeks and left a wasteland.

Usmanova said she joked with her husband on the bus ride, in a convoy agreed by the United Nations and the International Committee of the Red Cross (ICRC), that they would no longer have to go to the bathroom with a torch.

“You just can’t imagine what we’ve been through: the terror,” Usmanova said. “I lived there, I worked there all my life, but what we saw there was just terrible.”