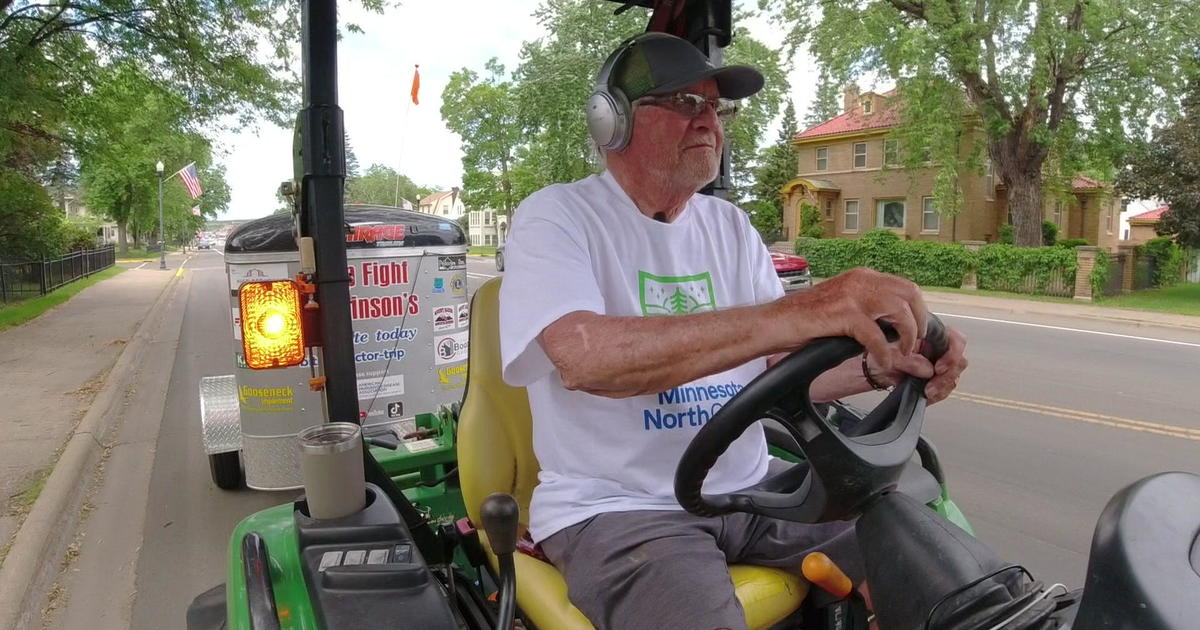 HIBBING, Minn. — Imagine driving off-road, 1,800 miles, on a tractor. A man from Washington state just did it for an important cause.

It all started as a joke. Mike Adkinson’s brother-in-law always talked about the need for a tractor.

So, Mike would sarcastically offer to drive his tractor from Bellingham, Washington to Perch Lake, Minnesota. Then one day, it stopped being a joke.

“I finally figured at 76 I could use a challenge like that, so I’ll do it,” Adkinson said.

Before embarking on the 1,800-mile journey, Adkinson found another reason to do so. His brother Dan was diagnosed with Parkinson’s disease.

“It really took a toll on our family and of course there’s not much you can do to help. So I thought, you know what? I think I can raise donations by doing this,” Adkinson said.

So he did. He drove through snow, sleet and, at times, unrelenting sun. The tractor’s right wheels were always within a foot of the ditch. And every time a truck passed, he would get muddy. Adkinson’s John Deere tops out at about 15 miles per hour, which is one of the main reasons it took him six weeks to travel from Washington to Minnesota.

The miles went by slowly, but the donations added up quickly. By the time he arrived in Minnesota, Adkinson had raised more than $50,000 for Parkinson’s research. He spent the nights in motels, and during the day people gave him donations and treats.

“One guy stopped by and I had beef jerky, and another couple stopped by and they had chocolate brownies,” Adkinson said. “I really enjoy meeting people.”

And they enjoyed meeting the tractor guy and his 15 mph mission to help others.

“He is the most caring, genuine and passionate person I know, and it was for such a good cause that we all support him and are grateful that he made it here in one piece,” niece Kendra Raich said. “It takes a special person, but that’s Uncle Mike.”

Adkinson has now officially raised more than $52,000 for Parkinson’s disease.