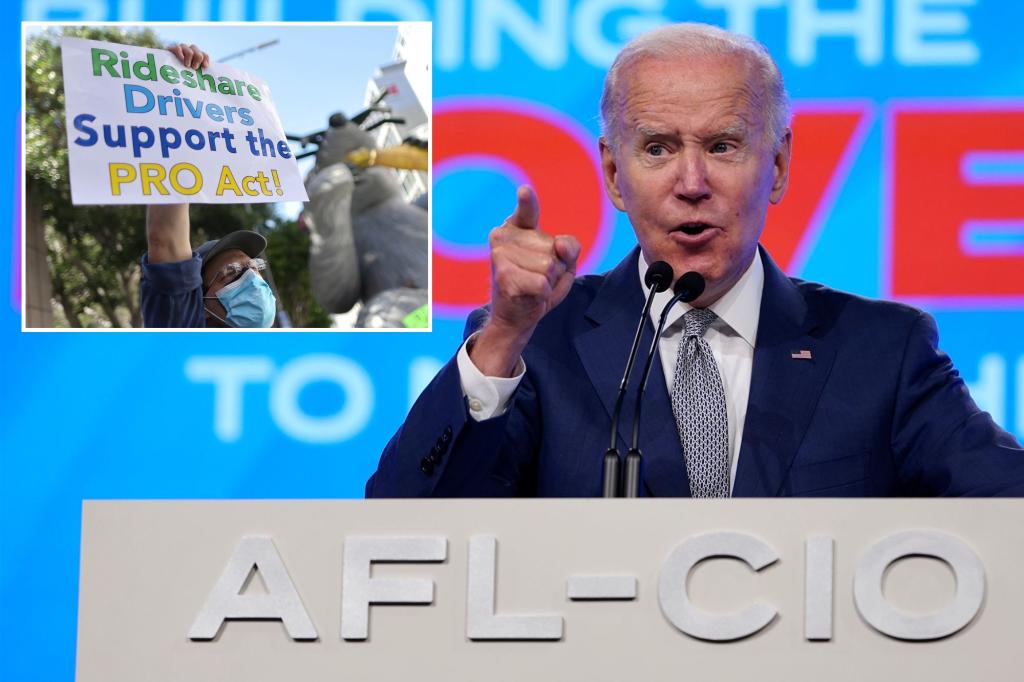 Labor Day should be about celebrating the hard work and determination of working Americans. Yet every year, Big Labor and its allies in Congress and in parliaments across the country manipulate the holiday to portray as “pro-worker” their schemes that actually empower union bosses at the expense of rank-and-file workers. .

The truth is that at the heart of Big Labor’s political agenda are more powers for union officials to wield against workers who will not voluntarily join a union. Nowhere is this more evident than in the actions of the administration of President Joe Biden.

Self-described “union man” Joe Biden often touts his support for the union bosses’ top legislative priority, the PRO Act, whose signature provision is the repeal of all 27 state right-to-work laws. That would force millions more workers across the country to subsidize the agendas of union bosses or else they would be fired.

Among the other provisions of the PRO-Act is the imposition of the controversial “card verification” method of imposing union power. Instead of allowing workers to have the final say on whether a union should be in their workplace by casting secret ballots, the PRO Act would allow union officials to circumvent NLRB elections by submitting “cards.” unions” collected by union organizers using pressure or intimidation tactics that would be prohibited in a secret ballot election.

Union officials know that whether a worker signs a card in the presence of one or more union organizers has little to do with how he or she would vote in private. Even the AFL-CIO’s “Guide for Union Organizers” admitted that workers often sign cards simply to “get the union off my back” and avoid further harassment. During “card check” campaigns, workers have even alleged that union organizers use bribes, threats and lies to get cards signed and to force unionization throughout the workplace.

The PRO-Law also targets independent workers and independent contractors, whose current status means they cannot be subject to monopoly unionization under federal labor law. Redefining them as traditional employees would destroy the job flexibility that is a huge draw for many who choose that job. That’s a feature, not a bug, for organizers who could then impose one-size-fits-all forced-quota union contracts on millions more Americans.

The bill’s takeovers by union bosses at the expense of individual workers’ rights don’t stop there. Union officials would also have the right to demand workers’ personal contact information during a unionization drive (even over a worker’s objections), to block the ability of workers to hold decertification votes to eliminate unions at that is opposed by a majority of workers and even to call on government bureaucrats to impose forced dues union contracts through binding arbitration over the objections of both workers and employers.

The PRO-Act remains stalled in the Senate, but this has not stopped Team Biden from moving to impose much of it by executive order. The former union lawyer who is now the powerful general counsel of the National Labor Relations Board is already pushing to implement multiple provisions of the PRO-Act, including “card verification” by making it illegal for employers to reject claims of recognition from union organizers based solely on union cards.

Time and time again, union officials and their allies in the administration prioritize the power of union bosses, even though it is the workers who oppose union membership who see their rights diminished. This view is not pro-worker, and we certainly shouldn’t celebrate it on Labor Day.

Union officials were not always so devoted to government coercion. Samuel Gompers, the founder of the American Federation of Labor (now the AFL-CIO), declared in a 1924 address to union shop stewards: “I want to urge devotion to the foundations of human liberty: the principles of voluntarism. No lasting gain has ever come from compulsion.”

Gompers understood, as did eight out of 10 Americans who support the Right to Work, that when union membership and financial support are voluntary, union officials must prove themselves to individual workers.

Meanwhile, when workers must pay or be fired, rank-and-file interests inevitably take a backseat to maintaining the political clout needed to perpetuate and expand the government-issued compulsion that keeps the dues flowing.

So this Labor Day, don’t buy the union propaganda that pro-union boss is pro-worker. Support the right to work and respect the individual rights of workers to decide whether or not they want to join a union.

Mark Mix is ​​president of the National Foundation for the Right to Work.