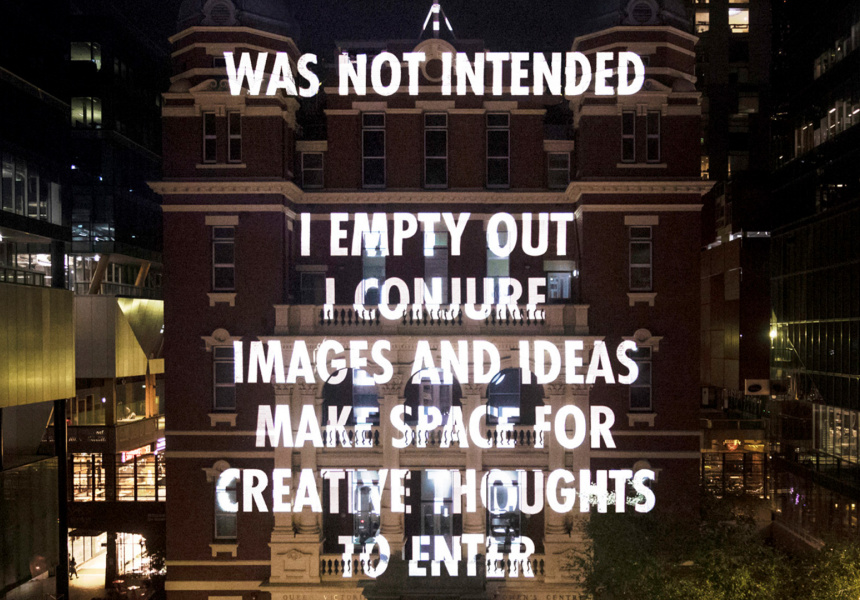 On the side of the Queen Victoria Women’s Center near Chinatown, a six-story-tall text gleams on the walls, projected from across Lonsdale Street. “Void / Conjuration / Images and ideas / I make room for / Creative thoughts / To enter,” the light says, before flashing in an instant to another phrase: “我們都在發同一個夢” – roughly translated: “We dream the same dream.

this is part of I conjure, the work of legendary conceptual artist Jenny Holzer. Since the 1970s, when her series Truisms saw provocative texts plastered on the walls of New York City, her work has been displayed in public around the world: on posters, T-shirts, plaques, LED signs and wrappers. condoms By using text, Holzer speaks directly to her audience.

This, the last of Holzer’s globe-trotting projection events, will see hundreds of his statements lighting up the walls above. golden square. This time, however, Holzer is not alone. His words will alternate with those of the Canadian Agnes Martin, the American Grace Hartigan, the Australian artist Tracey Moffatt (responsible for the I conjure text and title), and Nikki Lam, based in Hong Kong via Melbourne, author of the earlier “We Dream” statement.

Lam has spent about half his life in Hong Kong and the other half in Melbourne. As such, she has a deep connection to both cities. With this project, Lam tackles the current climate in Hong Kong, with projected text only in traditional Chinese. There is no written translation below, and no context is provided.

“The content of my contribution is intended to speak directly to Hongkongers,” says Lam. “It’s a reminder of the freedom we all hold together.”

“I think about translation all the time, consciously and unconsciously,” says Lam. “Certain images are translated in a certain way, through the audience. “Perhaps only those familiar with the context will understand the meaning. These are almost encrypted messages to other Hongkongers. If you walk past that in Chinatown, you’ll know exactly what it means and the context it comes from. But no one else.

Since 2019, millions of Hong Kong citizens have taken to the streets to protest against the government’s (since abandoned) extradition bill, which would have allowed the extradition of activists and journalists to China. Exacerbated by a violent police response, the large and well-organized protests have become a flashpoint of globally recognized people power.

Presented solely in a language understood by around five per cent of Melbourne residents, these statements are strictly targeted. But there are elements in this work that will seem cryptic even to Melbourne’s many thousands of native Chinese speakers.

In writing his contributions, Lam was inspired by the slogans and language adopted by the protesters. In 2020, when the new national security law made it increasingly difficult to protest and discuss, the protesters evolved, using a coded language to communicate without interference. “Hong Kongers have always been creative with our languages,” says Lam. “It has been a port city for over a century and many multilingual phrases come from Cantonese, English, Mandarin and other languages.”

Between them, the four artists in this work are responsible for nearly 300 statements, proclamations about creativity, art, and activism. Holzer’s words are both poetic and activist, simple and built on a web of meaning, giving them universal relevance and lasting power. He lam complicates this, reminding us that what may seem far away is interwoven with the streets of our own city.

As Holzer once put on a billboard above Times Square: “All things are delicately interconnected” and as Lam writes: “Let our art bear witness to history.”

I conjure takes place June 1-12 at the Queen Victoria Women’s Centre, near Chinatown, as part of Growing festival, you can know more here

Broadsheet is a proud media partner of Rising