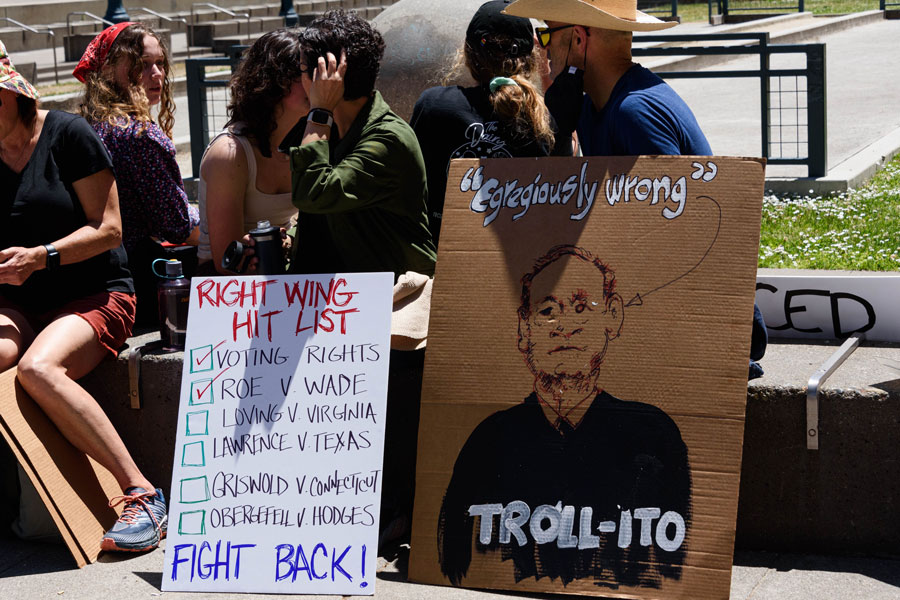 BROOKLYN, NY – The pro-life movement’s efforts to save babies from death by abortion may ultimately result in the overturning of Roe v. Wade. You know that life is winning because of how crazy the radical left has reacted to Judge Alito’s draft.

Large crowds gathered in front of Supreme Court justices’ homes, shouting obscenities and holding up signs meet the criteria for intimidation. Judge Kavanaugh’s two youngest children and wife were at home as the protests unfolded.

It is illegal to try to influence federal judges deliberating a case. protesters of the “Ruth sent us” group (and others) must all be in custody. To date, there have been few, if any, arrests despite the picketers being easily identifiable and violating US Federal Code 1507.

Anyone who, with intent to interfere with, obstruct, or impede the administration of justice, or with intent to influence any judge, juror, witness, or judicial officer, in the performance of their duty, pickets or parades on or near any a building housing a court of the United States, or in or near a building or residence occupied or used by such judge, juror, witness, or officer of the court, or with such intent uses any sound truck or similar device or uses to any other demonstration in or near such building or residence, shall be fined under this title or imprisoned for not more than one year, or both.

Since the publication of the draft decision, we have seen a nearly naked wild woman smashing a doll and screaming “I’m killing the baby!” in front of Saint Patrick’s Cathedral. A deranged wacko broke into the offices of Concerned Women of America and urinated on camera. Churches and pro-life organizations were smashed. LifeNews.com reports that two pro-life groups were attacked and bombed. Threatening messages were scrawled on church walls, including “If abortions aren’t safe, neither are you.”

Several pro-life pregnancy centers have been attacked by pro-abortion terrorists. A group called “Jane’s Revenge” Wisconsin Family Action, a pro-life organization, claimed responsibility for the bombing. The group issued a note warning that there will be more violence. Across the United States, there have been attacks on churches, pro-life organizations, and individual pro-life activists. The lunatics of the left interpret pages of the book of the revolutionary Saul D. Alinsky Rules for radicals.

So far, the leaker has not been found. Why is this taking so long? Something is not right. Also, the Jane’s Revenge investigation continues with no arrests. It seems there is no interest. That’s strange, considering January 6. “insurgents” they had no bombs, were herded away by Capitol Police and then arrested for trespassing only.

Does anyone think these maniacs are going to stop? It’s going to get a lot worse. Roe Rage is organized and demonic. There are now threats of a “Summer of Rage” if Roe is overturned. They even threaten to burn and destroy the Supreme Court building. If they will not be governed, that means anarchy.

This sounds like a revival of the chaotic organized terror campaigns led by the SDS and the Weather Underground in the 1960s and early 1970s. Innocent people may be killed and millions of dollars worth of property damaged. Peaceful pro-life activists are being harassed and assaulted by deranged pro-abortion extremists, as can be seen in this video.

Pro-abortion they call that “Justice.”

His agenda does not end with legal infanticide. His mission is to destroy organized religion, traditional values ​​and especially the Catholic Church.

But the fascist propaganda that started the “my body my choice” The baby killing movement is dying. The DC abortion rally drew little attention. In the video of the anti-abortion rally, you can barely hear the crowd cheering or clapping. Compare that with this video from Fr. Mike Schmitz, keynote speaker at the 2022 March for Life. To loud applause. And the March for Life took place on a frigid day, unlike the balmy weather enjoyed by those attending the abortion march.

A recent Trafalgar poll shows that 57.6% of Americans want abortion outlawed in most circumstances. The fringe of abortion lunatics is a shrinking minority. They must not be allowed to dominate the majority of Americans who want the killing of babies to end.