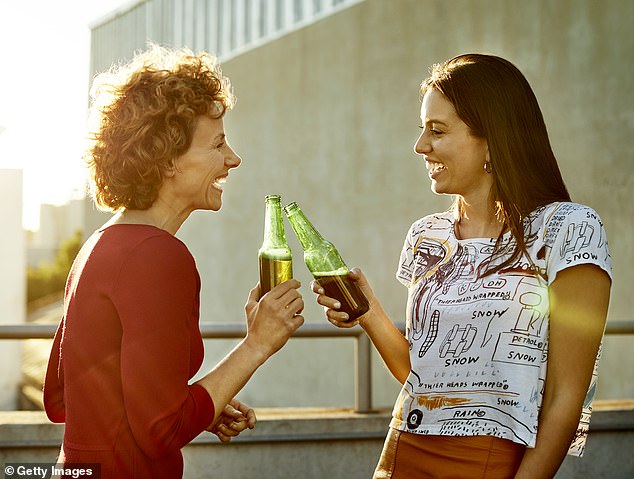 Is BEER the key to staying hydrated in the heat wave? Experts reveal that the high water and electrolyte content can increase fluid levels (but no more than two pints!)

By Georgia Green for Mailonline

With temperatures across the UK set to hit record levels of over 40C today, we’re all looking for ways to stay hydrated and surprisingly a glass of beer could be the answer.

While drinking alcohol in hot weather is generally considered off-limits due to its dehydrating effects, experts have revealed that enjoying a pint after work could be helpful.

In response to a viral Twitter discussion about beating the heat, Dr. Stuart Galloway of the University of Stirling told Femail that because beer contains some electrolytes and is high in water content, it can be helpful for hydration.

However, he added that you’re likely to miss out on any beneficial effects if you drink more than two pints.

We’re all looking for ways to stay hydrated, and surprisingly, a glass of beer could be the answer due to its high water content (stock image)

The discussion was sparked by Dr. Ellie Mackin Roberts, an Australian living in England, when she shared her 10-step plan for beating dehydration in a heat wave on Twitter.

‘If you’re dehydrated (and you’re an adult, and you can), drink a half pint of beer (no alcohol included!) and then go straight to the water (or a sports drink or cordial if you don’t like water),’ she wrote.

Naturally, the thread was filled with comments from people asking why he had recommended drinking beer, because alcohol is known to have a diuretic effect.

However, beer contains electrolytes, sugar, and salt, all of which help the body absorb and retain fluids, rather than having them pass directly through you.

Alcohol is a diuretic that makes you urinate more and can leave you severely dehydrated.

“Alcohol makes us urinate more and more frequently, and the fluid that leaves our body at this rate can lead to dehydration if not replenished,” explains Drink Aware.

‘It is important to replace lost fluid by drinking water if we choose to drink alcohol.

Alcohol also causes the blood vessels in your skin to dilate, making you feel hotter.

Of course, other beverages, such as sports drinks, also contain all of these.

But if all you have in your fridge is a can of beer, a small amount of beer followed by a lot of water might be best for you.

Dr. Stuart Galloway, a hydration expert at Aqua Pura, confirmed to Femail that beer can be counted as part of your daily fluid intake.

“With the UK in the midst of a heatwave, it’s important for people to make sure they stay hydrated and keep their fluid levels up to avoid unwanted health problems,” he said.

Beer has a relatively high water content and does contain some electrolytes, so if a small amount is consumed as part of your daily fluid intake along with non-alcoholic beverages such as water, beer can be part of a plan to keep you hydrated during the day. heat wave

However, you should be aware that alcoholic beverages will lead to dehydration if you drink more than one or two servings.

“With beer in particular, if you drink more than two pints, it will most likely have a negative effect on your hydration status.”

Explain that the same rule applies to coffee and tea as well.

He explained: ‘A similar situation occurs with caffeinated drinks, for example a black coffee is mostly boiling water, so it is part of your daily water intake.

“The dehydrating effect of caffeine begins to be noticeable after about a liter of regular coffee. Until then, it can be classified as part of your daily water intake.

“Therefore, the best and healthiest way to ensure you meet your water needs during hot weather is to drink still or sparkling water.”