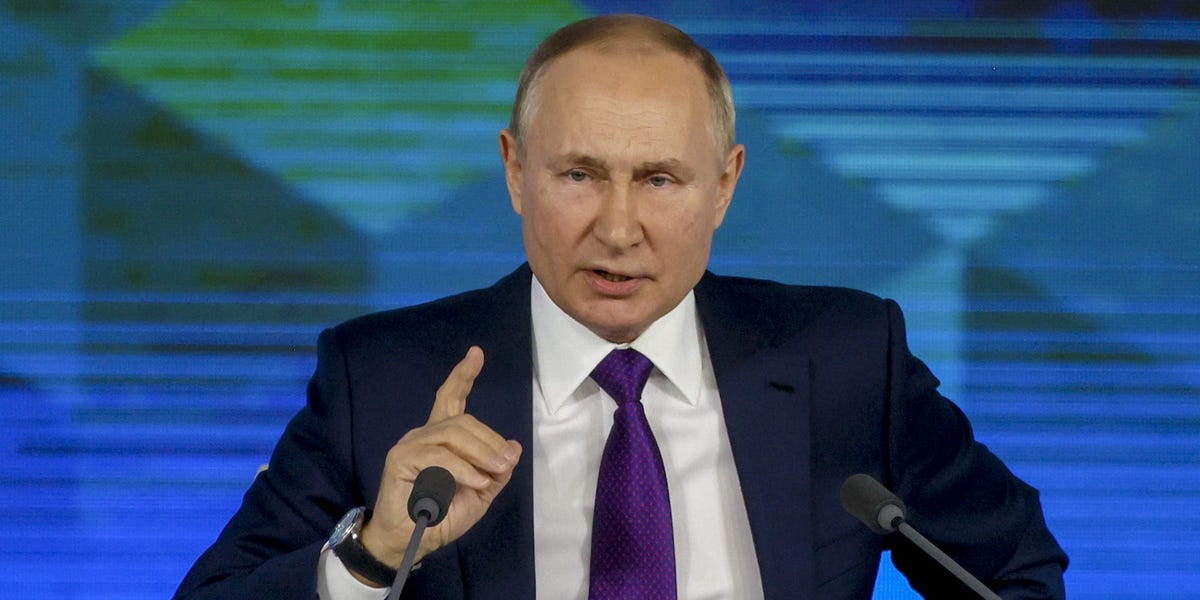 The Kremlin on Thursday warned of a complete break in US-Russian relations if Washington decides to sanction Russian President Vladimir Putin over the Ukraine crisis.

“The imposition of sanctions against the head of state and the head of Russia, I repeat once again, is a scandalous measure comparable to a severing of relations,” said Kremlin spokesman Dmitri Peskov, to the Russian state news agency Tass.

It came after the Senate Main Democrats, led by Senator Bob Menendez of New Jersey, unveiled a new sanctions bill on Wednesday that would penalize Russia if it invaded Ukraine.

“This legislation makes it clear that the US Senate will not stand idly by as the Kremlin threatens a reinvasion of Ukraine,” Menendez, chairman of the Senate Foreign Relations Committee, said in a statement.

“As the Biden administration searches for a diplomatic channel this week in Europe to avoid another bloody escalation in Ukraine, I find little reason to believe that Putin is negotiating in good faith and I don’t think he has any new respect for the sovereignty and territorial integrity of Ukraine, “added Menendez. “Putin does not need to collapse his entire economy or sacrifice the lives of his own people in a futile attempt to rewrite the map of Europe.”

The White House has said it supports the legislation, which would impose sanctions on senior Russian officials, including Putin.

“We support Senator Menendez’s legislation, which would incur significant costs for the Russian economy and support further security assistance to Ukraine if Russia invades further,” the National Security Council spokesperson said, Emily Horne, on the bill, according to the New York Times. “We will continue to work with Congress to maximize the potential costs to Russia.”

The legislation offers an alternative to a bill introduced by GOP Senator Ted Cruz to impose sanctions on Nord Stream 2, an undersea pipeline connecting Russia to Germany that opponents say could give Moscow leverage major on Europe and harm Ukraine. The pipeline, which is completed but not yet operational due to the wait for German certification, is being put in place to deliver gas from Russia to Germany. It crosses the Baltic Sea, bypassing Ukraine and Poland.

Although the pipeline is controversial and the Ukrainian government supports sanctions against it, the main Senate Democrats opposed Cruz’s bill and accused the Texas Republican of trying to harm President Joe Biden in undermining transatlantic relations amid delicate diplomatic talks over Ukraine.

“Let’s be clear, the Cruz Bill we are debating this week has nothing to do with stopping a Russian invasion of Ukraine,” said Senator Chris Murphy of Connecticut. noted in a tweet on Tuesday. “In fact, it makes it more likely because the main impact of the bill is to break transatlantic unity at the very moment when unity is the key to deterring Russia.”

The Biden administration, keen to stay on the safe side of Germany, opposed sanctions on Nord Stream 2 and recently claimed that the pipeline would provide Europe with leverage over Russia.

Cruz’s bill was not narrowly passed in the Senate on Thursday.

Murphy told Insider on Thursday that Menendez’s bill was the “right way forward,” despite Russia threatening to sever ties with the United States if Putin is sanctioned.

“If Russia were to engage in a conventional invasion of Ukraine, it would shatter post-war norms. It would be virtually unprecedented in the post-war world. And it must be treated as a serious, significant and heartbreaking violation. international standards, ”said Murphy. “We have to make Vladimir Putin understand that the relationship between the United States and Russia will be fundamentally different, and his relationship with the rest of the world will be fundamentally different.”

“Russia should be treated as a pariah state if it chooses to deploy an army in a neighboring country,” added Murphy. “I think Putin is getting nervous. I think he sees the world lining up against him… And he starts to make threats with the intention of trying to scare the rest of the world into changing their behavior. . “

The Connecticut Democrat accused the Russian president of “inventing threats that do not exist against his country” while “threatening a neighbor with conventional military force”.

Russia has gathered a huge force of tens of thousands of troops near the Ukrainian border in recent weeks, raising fears of an invasion.

The United States and its allies have held talks with Russia in Europe this week in an attempt to prevent a wider confrontation, but there have been no major breakthroughs so far. Moscow demanded binding security guarantees that the United States and NATO rejected as non-partisans, including that Ukraine should never be allowed to join the alliance. Although Ukraine is not currently a member of the alliance, it has strong ties with NATO.

A senior Russian diplomat suggested on Thursday that it was unnecessary to continue the dialogue, as EU leaders warned of the potential for war. Some US officials and experts have expressed concern that Moscow could use the failed diplomatic talks as a pretext for an invasion.