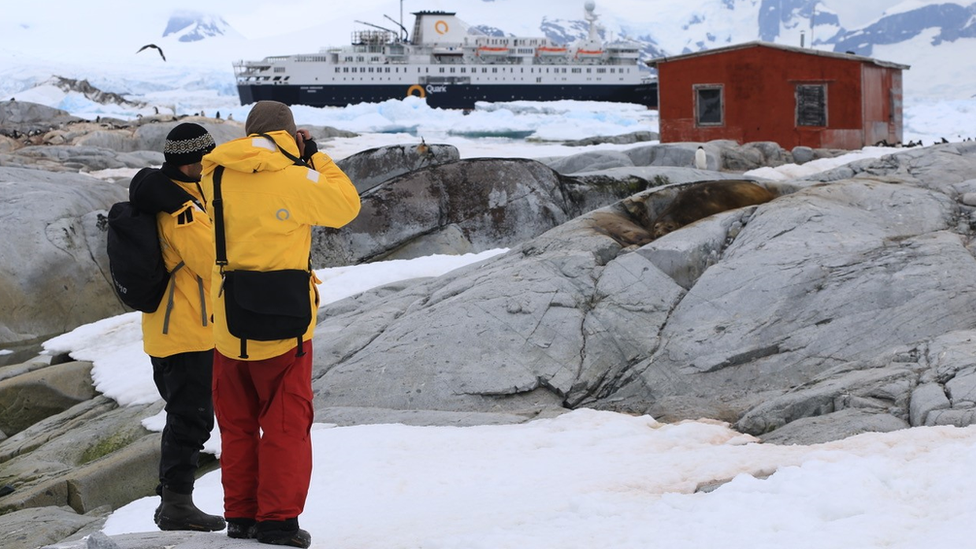 Species from all over the world that “hitchhike” on ships threaten Antarctica’s pristine marine ecosystem.

This is the conclusion of a study on tracking research, fishing and tourist vessels that regularly visit the otherwise isolated protected region.

He revealed that ships from 1,500 ports around the world were visiting Antarctica.

“These ships travel all over the world,” said senior researcher Arlie McCarthy of the University of Cambridge.

“This means that almost anywhere could be a potential source of invasive species.” These non-native species, she explained, “can completely change an ecosystem.”

“They can create entirely new habitats that would make it harder for these incredible Antarctic animals to find their own place to live.”

The study, published in the Proceedings of the National Academy of Sciences, underscores the need for stricter measures to ensure that ships do not bring in species that could disrupt sensitive Antarctic habitats.

The research team, from the British Antarctic Survey and the University of Cambridge, used satellite data and international navigation databases to determine the weight of Antarctic traffic – and the origin of these ships.

“What was really surprising was that they don’t have just one home port that they come and go,” Ms. McCarthy said.

Instead, the global movement of ships connects otherwise isolated parts of Antarctica with more than 1,500 ports around the world.

Any marine species that can cling to the ship’s hull and survive the voyage to Antarctica could pose an invasive threat.

Creatures, including mussels, barnacles, crabs and algae, are of particular concern because they attach themselves to the cockles, in a process called “biofouling.”

Mussels, for example, can survive in polar waters and spread easily, threatening marine life on the seabed. Their filtering of water alters the marine food chain as well as the water chemistry that surrounds them.

“It’s the last place in the world where we don’t have marine invasive species,” said Ms. McCarthy. “So we [still] have the opportunity to protect it. “

Professor David Aldridge of the University of Cambridge explained: “Species native to Antarctica have been isolated for the past 15 to 30 million years.

This makes invasive species one of the greatest threats to its biodiversity. And, as Professor Lloyd Peck of the British Antarctic Survey added, “your chances of losing a very unique species are much higher in Antarctica”.

Tourism is regulated in the region; tourist vessels must follow biosecurity protocols. But this study found that tourism accounted for 67% of visits to Antarctic sites (followed by research, which accounted for 21% and fishing, 7%).

According to the International Association of Antarctic Tour Operators, the 2019/20 season saw more than 70,000 people visit the region. And while the industry has been disrupted by the pandemic, that number has steadily increased since the first few hundred visitors from Chile and Argentina arrived to the South Shetland Islands in the 1950s.

It’s an increase, say the researchers, which has other consequences.

Ms McCarthy told BBC News: “Everywhere these ships go we see other types of human impacts on the environment, from accidental dumping of garbage to pollution to collisions with wildlife. or noise pollution. “

Professor Peck said tourism to Antarctica was both “positive and negative”. “They represent a large part of the number of visits [to the continent] and could therefore bring [non-native species] in.

“But tour operators are very interested in the environment and take a lot of safety precautions.”

More generally, biosecurity measures to protect Antarctica – such as cleaning ship hulls – are currently focused on a small group of recognized Antarctic “ports of entry”.

But since this study found that many other ports around the world are linked to the region, the British Antarctic Survey is calling for “improved biosecurity protocols” and environmental protection measures to protect Antarctic waters. This means inspecting the hulls of ships with cameras and cleaning them more frequently.

Professor Peck said this was particularly important “as ocean temperatures continue to rise due to climate change”. He added: “we know something will happen if we leave it as it is.”