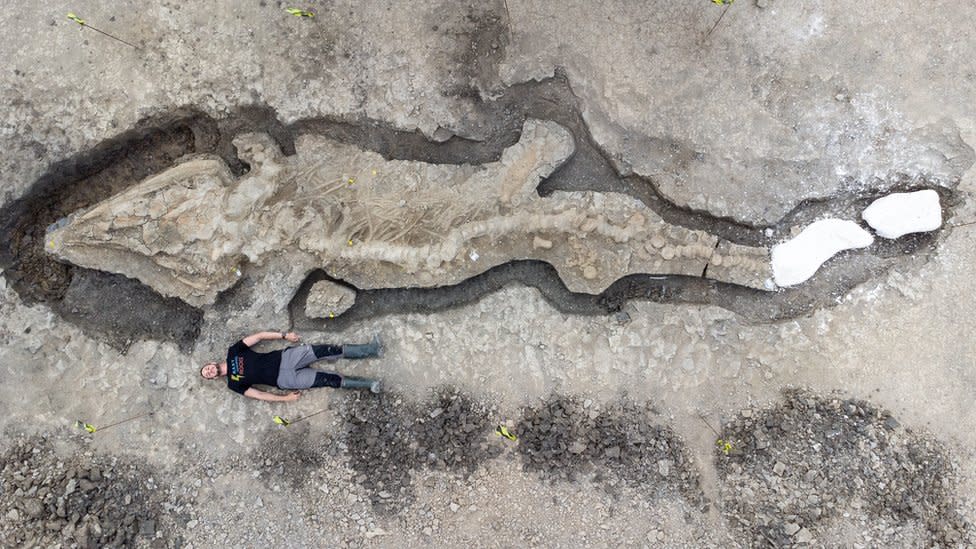 “I called the county council and said I thought I found a dinosaur,” said Joe Davis, who works at Rutland Water Nature Reserve.

During landscaping work at the reserve’s reservoir in February 2021, he spotted something strange sticking out of the mud.

It wasn’t a dinosaur. But these were the fossilized remains of a ten-meter-long marine predator called an ichthyosaur.

And it was the largest of its kind ever discovered in the UK.

“I looked at what appeared to be rocks or ridges in the mud and said it looked a little organic, a little different,” Mr Davis told BBC News. “Then we saw something that almost looked like a jawbone. “

The council told Mr Davis: “We don’t have a dinosaur department at Rutland County Council, so we’re going to have to get someone to call you back.” A team of paleontologists was brought in for further examination.

They concluded that it was an ichthyosaur – a warm-blooded, air-breathing type of marine predator, much like dolphins. They could be up to 25 meters long and lived between 250 and 90 million years ago.

Dr Dean Lomax, a paleontologist from the University of Manchester, was recruited to lead the excavation. He called the find “truly unprecedented” and – due to its size and comprehensiveness – “one of the greatest discoveries in British paleontological history”.

“Usually we think of the ichthyosaurs and other marine reptiles found along the Jurassic coast of Dorset or the Yorkshire coast, where many of them are exposed by erosion of the cliffs. Here inland , this is very unusual. “

Rutland is over thirty miles from the coast, but 200 million years ago higher sea level meant it was covered with a shallow ocean.

When the water levels in the Rutland Reservoir fell again in late summer 2021, a team of paleontologists came to excavate the remains. Particular attention was paid to the removal of the enormous skull.

A large block of clay containing the ichthyosaur’s head was carefully dug up before being covered with plaster and placed on wooden splints.

The block, weighing almost a ton, has been lifted from the mud and will now be examined in more detail.

“It is not often you who are responsible for safely lifting a very important but very fragile fossil weighing so much,” said Nigel Larkin, paleontological curator and visiting scholar at the University of Reading. “It’s a responsibility, but I like a challenge.”

Anglia Water, which manages the Rutland Reservoir, is now seeking funding to allow the ichthyosaur to stay in the area and be enjoyed by the general public.

“A lot of people thought I was pulling their leg when I told them I found a large marine reptile at work,” Davis said. “I think a lot of people won’t believe it until the TV program airs.”

This TV show is Tuesday January 11 at 8 p.m. on BBC Two. “Digging for Britain” will then be available on BBC iPlayer.