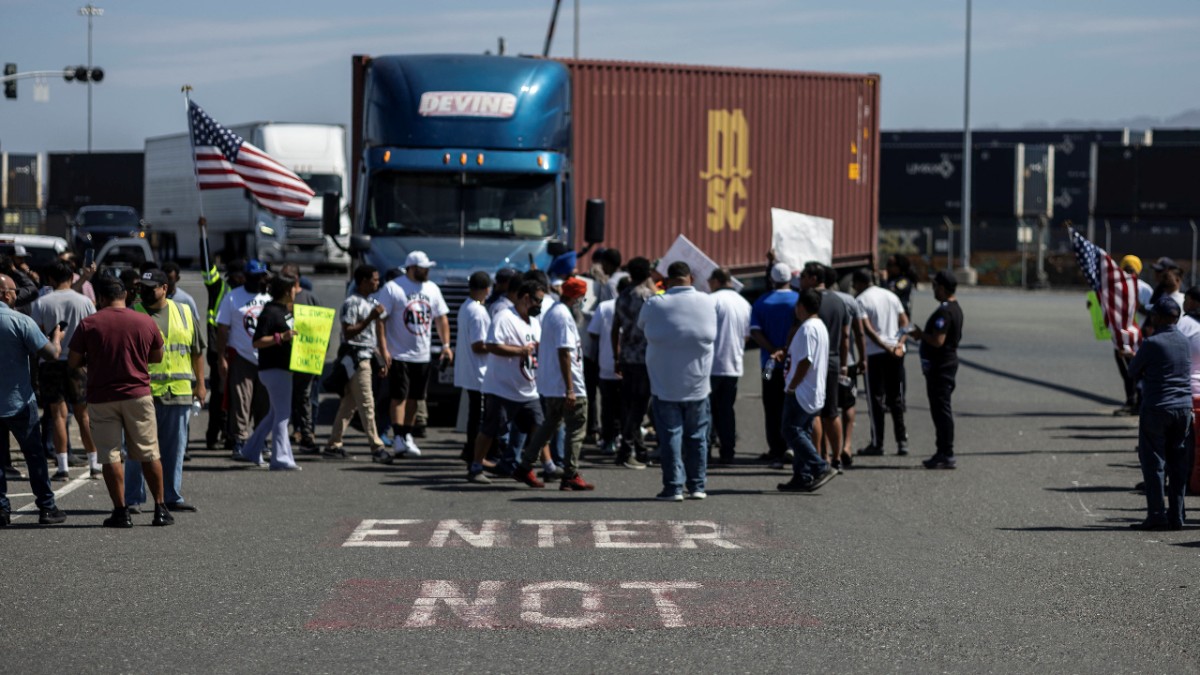 Truckers clogged traffic at the Port of Oakland Monday in protest of a state law that makes it harder for independent contractors to move goods and could limit labor at the state’s already clogged seaports, threatening to worsen supply chain bottlenecks fueled by the pandemic.

California ports handle about 40% of the shipping containers entering the United States. The trucking disruptions come at a time when West Coast port employers and unions are also negotiating a high-stakes labor contract.

The law, known as Assembly Bill 5, or the “independent worker” law, sets stricter standards for classifying workers as independent contractors. Independent truckers who now operate under the authority and insurance of the companies that hire them for the jobs would be forced to bear the high costs and bureaucracy of assuming that when the law is enacted.

“They want to eliminate us,” said freelance driver Douglas Urtado, who joined Monday’s protest at the Port of Oakland in the San Francisco Bay Area.

Wayne Feng, wearing a “No AB5” T-shirt, told Reuters the law would be so financially taxing that drivers “are not earning anything”.

Legal challenges prevented AB5 from taking effect in 2020, but the US Supreme Court last month rejected a petition by the California Trucking Association that claimed the law is blocked by federal regulations. Experts say a court order suspending the law could soon be lifted.

More than 100 drivers and small trucking business operators opposed to the law stormed two terminal gates at the Port of Oakland, reducing truck entry to a trickle. The action came after truckers from the Port of Los Angeles picketed gates and snarled roads at the nation’s busiest port complex last week.

Company owner Josué Méndez, 29, said AB5 would devastate his port trucking business, which relies on 10 independent drivers to move everything from medical equipment to almonds.

“I can no longer hire them” and comply with AB5, Mendez said.

AB5 supporters, which include the Teamsters union that once dominated trucking, say it will crack down on labor abuses by pressuring owners to hire drivers as employees and provide workers’ compensation insurance and other benefits.

“Now that the federal courts have rejected the trucking industry’s appeals, it’s time to move on,” Dee Dee Myers, director of the Governor’s Office of Business and Economic Development, said in a statement.

California longshore trucking work practices date back to the 1980s, when the United States deregulated trucking. That transformed the business from one dominated by large unionized companies to the current model in which most companies rely on independent drivers, many of whom are recent immigrants.

Dock drivers’ pay is now one-half to two-thirds less than it was before deregulation, according to an estimate by Wayne State University economics professor Michael Belzer. Accurate data on compensation is hard to come by because government data, particularly on hours worked, is incomplete, he said.