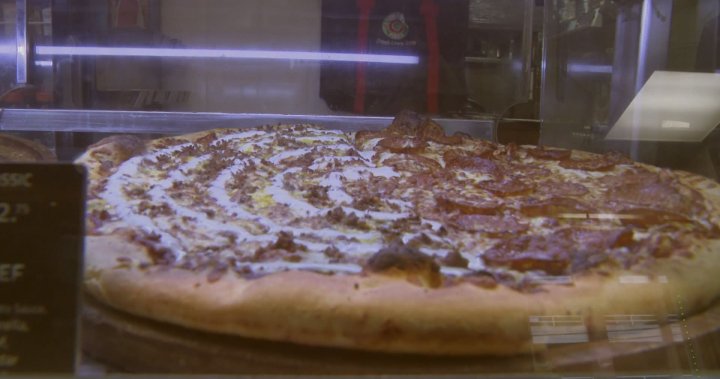 A Vancouver man is facing charges after a pizzeria employee was allegedly threatened while trying to do the right thing at work.

The incident occurred at Fresh Slice on West Pender Street in downtown Vancouver.

The store’s motto is “We love our guests.” Kids get a free balloon, and the staff sometimes offers a free slice of pizza to the homeless in town.

But on Friday night, that reportedly wasn’t enough for one customer, who allegedly demanded an entire pizza.

The counter server, whom Global News does not identify for security reasons, said the situation quickly turned aggressive.

“That guy came over and then showed the knife and [said] I need all the pizza,” he said.

“She said no. If you want, I’ll give you a slice. He was like, ‘No, I need all the pizza,’ and then he was behind the door and then she was like, ‘Okay, call the police.'”

The center’s security ambassadors responded and called the police. The suspect fled with an entire cake, according to Namasivayam, but was quickly arrested nearby.

Vancouver Police applauded the victim for reporting the incident and say they are hearing similar stories from numerous small businesses downtown.

“Sometimes it’s giving people a brochure here or there, they get to know a lot of people in their neighborhood,” said Sgt. Steve Addison with the Vancouver Police Department.

“When an incident like this happens, it really betrays the trust that they have built with the people in the neighborhood and it is extremely traumatic for them.”

1:42
With better security at home, Metro Vancouver burglars turn to new targets outside of homes

With better security at home, Metro Vancouver burglars turn to new targets outside of homes – June 23, 2022

Juan Serna, 31, has been charged with making threats of death or bodily injury and theft of less than $5,000.

Serna, who will appear in Downtown Community Court on Tuesday, is also charged with assault with a weapon and possession of a weapon for a dangerous purpose in connection with what police allege was a similar incident on June 19 blocks from distance.

The owner of Pizza 2001, which is on the same block, said for years he handed out free slices to those in need, but ended the practice a decade ago because it became too much, with some people just wanting “oven.” fresh pizza”.

“This is the first time I’ve heard of someone being threatened with a knife,” said area employee Dominik Novak.

“I think it’s terrible to be honest.”

Novak said he usually feels safe during the day, though last Wednesday he witnessed a bag snatch in broad daylight outside Browns Crafthouse.

“I see a woman screaming here without her bag and I look to the left and I see a man running behind the block,” Novak recalled.

“I didn’t see much of the guy, but I just saw how he was running behind the block and holding the bag.”

Namasivayam said he is used to people taking advantage of Fresh Slice’s goodwill.