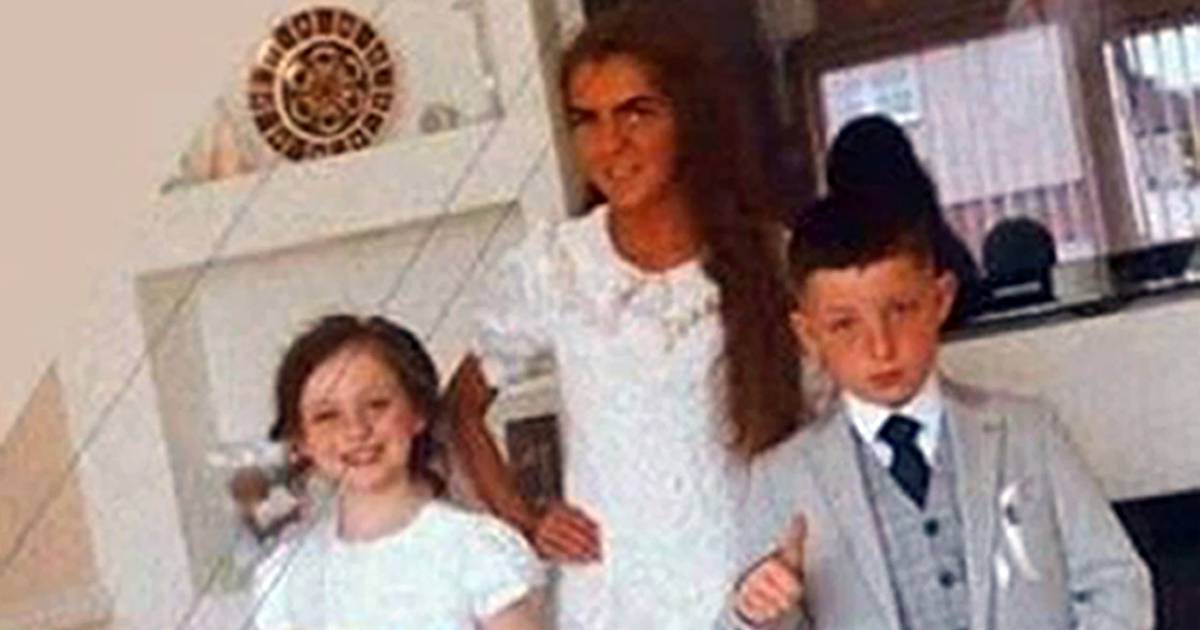 The quiet avenue of houses in Tallaght, where twins Chelsea and Christy Cash (8) and their sister Lisa (18) lived their lives, is full of children.

Throughout Sunday, they skateboarded, biked and wandered to each other’s houses. They spoke quietly, hugged and cried as parents comforted them and each other following the violent death of the Cash brothers at their home on Rossfield Avenue on Saturday night.

One woman, leaning against a garden wall, said she couldn’t stop shaking. Her son, she said, played every day with the little twins.

“I had to sit my seven-year-old son down this morning and tell him that two of his friends went to heaven. He asked ‘Why?’ He said: ‘A very bold man hurt them.’

“Christy was lovely, just a lovely little thing,” she says annoyed. “I had small talk with him sitting here on this wall.

“Chelsea was beautiful, a cheeky little face. She passed by and stuck her tongue out at you with a smile. This path is full of children and they would all congregate in these gardens.”

Another woman recalls Chelsea as “quiet but always saying, ‘Hello.’ If you congratulated her, she would put a big smile on her face. She always had beautiful dresses, all the bows and everything.”

As we speak, a 14-year-old boy comes to the door and asks about the woman’s son. When his son appears, she hugs him, hugs him and cries. He says that he saw the incident unfold the night before. Looking surprised, he wipes the tears from his face.

Like many of his neighbors, he was awakened by lights, sirens and screams in the early hours of Sunday. Another woman describes hearing “screams and breaking glass” around midnight.

“I walked out and there were just guards everywhere yelling, ‘Get down, get down, get down.’ They shouted through the windows of the house: ‘Top right, top left.’ So all I heard was ‘The Baby’. The baby.’ The youngest member of the family, Margaret (22 months), was not injured in the incident.

It is understood that the children’s mother was away while her eldest daughter looked after the children. A brother Michael (14) raised the alarm after he jumped from an upstairs rear window when the front door had been barricaded.

“A neighbor next door threw him over his wall and then they caught his aunt who lives across the street,” explained a local resident, a man in his 50s.

He said he had heard screaming around 11:45 pm “I was in bed. All I could hear was a woman screaming, ‘Can someone help me? Help me.’ Halfway there he woke up to her screaming.

“The number of people who were on the street. Then the guards and the firemen arrived. There was a helicopter for about an hour. They had spotlights in the windows. He was at the window with the child …

“It is very traumatic for everyone here. That everyone has seen that, that they have felt so helpless. Some of the men are wishing they had run to stop him. The children, they played with those children.”

Throughout Sunday, locals poured into the nearby Brookfield Youth and Community Center, which was opened to provide a space for people to come together and comfort one another.

Local councilor Charlie O’Connor, who attended the scene at the Rossfield estate on Sunday, said he was “so shaken on a personal level”.

“It’s going to have a huge effect not only on neighbors here in Rossfield and Brookfield, but also in the wider Tallaght area and beyond. It is an event that is going to affect many, many people.

“We have to reach out to the community and support them in any way we can. I was also told that the gardaí who attended the site last night were also deeply shocked and are receiving support.”

A man in his 20s, arrested at the scene, continued to be held on Sunday night under section 4 of the Criminal Justice Act 1984, at Tallaght Garda Station.