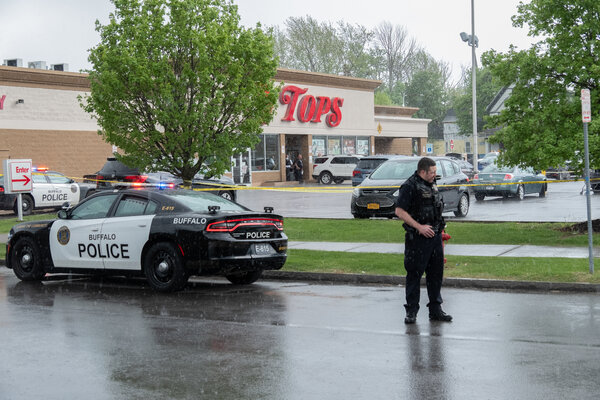 BUFFALO — A gun-toting teenager fascinated by a white supremacist ideology known as replacement theory opened fire at a supermarket in Buffalo on Saturday, methodically shooting and killing 10 people and wounding three more, nearly all of them black, in one of the world’s deadliest racist massacres. deadliest in recent American history.

Authorities identified the gunman as Payton S. Gendron, 18, of Conklin, a small town in rural southern New York. Gendron drove more than 200 miles to stage his attack, which he also livestreamed, police said, a chilling video that seemed designed to further his sinister agenda.

Shortly after Gendron’s capture, a manifesto believed to have been posted online by the gunman surfaced, riddled with racist and anti-immigrant views that claimed white Americans were at risk of being replaced by people of color. In the video that appears to have been captured by the camera attached to his helmet, an anti-black racial slur can be seen on the barrel of his gun.

The attack, at a Tops Friendly Market in a majority black neighborhood in East Buffalo, drew grim comparisons to a string of other racially motivated massacres, including the killing of nine black worshipers at a church in Charleston, South Carolina, in 2015; an anti-Semitic attack at a Pittsburgh synagogue in 2018 that left 11 dead; and an attack at a Walmart in El Paso in 2019, where the accused man had expressed hatred towards Latinos. More than 20 people died there.

At the Buffalo grocery store, where four employees were shot, the savagery and planning was evident: Gendron was armed with an assault weapon and wearing a bulletproof vest, police said. And his preferred victims also seemed clear: In total, 11 of the people shot were black and two were white, authorities said.

At a news conference Saturday night, Buffalo native Gov. Kathy Hochul echoed that sentiment, denouncing the attack as a “barbaric act” and “execution of innocent human beings,” as well as a frightening reminder of the dangers of “white supremacist terrorism.”

“It strikes us to the heart to know that there is so much evil lurking,” Governor Hochul said.

Based on what was written in the manifesto, the attack appeared to have been inspired by previous massacres motivated by racial hatred, including a mosque shooting in New Zealand and the Walmart shooting in Texas, both in 2019.

In the manifesto, which was being reviewed by police, Mr. Gendron, who had attended a community college in Binghamton, New York, wrote that he had selected the area because it was home to the highest percentage of black residents near his home in the south of the state. Tier, a predominantly white region that borders Pennsylvania.

The document outlined a careful plan to kill as many black people as possible, complete with the type of weapon he would use, a timeline, and where he would eat beforehand.

He wrote that he had been “passively preparing” for the Buffalo attack for several years, buying ammunition and equipment, while taking infrequent target practice. In January, the plans “really got serious,” according to the manifesto, which also praised the perpetrator of the 2015 South Carolina attack and the man who killed 51 Muslims at two mosques in Christchurch, New Zealand, in 2019.

Gendron had read the racist writings of the New Zealand gunman, who had also livestreamed his attack, a method that was also used in a shooting at a Jewish synagogue in Halle, Germany, in 2019.

At an arraignment Saturday night, Mr. Gendron pleaded not guilty to first-degree murder, a charge that could lead to life in prison without parole. He said little except to confirm that he understood the charges, and he showed little sign of emotion inside the courtroom.

Other gunmen have referred to the racist idea known as “replacement theory,” a concept once associated with the far right but which has become increasingly common, pushed by politicians and popular TV shows.

Authorities said the camera the attacker was carrying was used to broadcast the attack live on Twitch, an Amazon-owned live streaming site that is popular with gamers. On Saturday, Twitch said it had taken the channel offline. Still, screenshots of the broadcast were circulating online, including some that appeared to show the shooter holding a gun and standing over a body at the grocery store.

In his manifesto, Gendron seemed enthusiastic about broadcasting his attack, saying the live stream allowed “everyone with the internet” to watch and record the violence.

The massacre began around 2:30 pm, authorities said, when Gendron arrived at the market from his car on a sunny spring afternoon, dressed in tactical gear and a bulletproof vest and carrying an assault weapon.

He shot four people in the parking lot, Buffalo Police Commissioner Joseph A. Gramaglia said at the news conference, three of them fatally. As he entered the store and continued firing, he was met by a security guard, a retired Buffalo police officer, who returned fire. But Mr. Gendron wore heavy metal plating; he killed the guard and continued into the store, shooting shoppers and employees.

When Buffalo police officers arrived and confronted Gendron, Gendron put a gun to his neck, but two troopers persuaded him to drop the gun and turn himself in, Gramaglia said.

Buffalo Mayor Byron W. Brown said he and his family regularly shopped at the store.

“Some of the victims of this shooter’s attack are people that all of us here know,” said Brown, the fifth-term Democrat who was the first black man elected mayor of Buffalo, New York’s second-most populous city.

In a statement made Saturday night, President Biden expressed sympathy for the families of the victims and praised law enforcement, adding that “a racially motivated hate crime is abhorrent to the very fabric of this nation.” ”.

“Any act of domestic terrorism, including an act perpetrated in the name of a repugnant white nationalist ideology, is antithetical to everything we stand for in America,” the president said. “Hate should not have a safe harbor.”

Gun deaths reached the highest number ever recorded in the United States in 2020, the first year of the pandemic, with a 35 percent increase, the Centers for Disease Control and Prevention reported Tuesday.

Gunfire in Buffalo on Saturday shattered a seemingly serene afternoon, prompting shoppers to scream and flee inside the Tops, and families scrambling to find loved ones outside the store.

Ken Stephens, 68, a member of a local anti-violence group, described a harrowing scene. “I came here and there were bodies everywhere,” he said.

The attack took place in a neighborhood known as Masten Park on Buffalo’s East Side. Dominique Calhoun, who lives within sight of the supermarket, said she was reaching the parking lot to get ice cream with her daughters, ages eight and nine, when she saw people running and screaming.

“That literally could have been me,” he said of the people who were killed.

Dorothy Simmons, 64, typically spends parts of her Saturdays in Tops, shopping for food to prepare for Sunday dinner, something she says is part of a common tradition in her community. On Saturday, however, she was working in Amherst.

And when he heard the news, he broke down and cried.