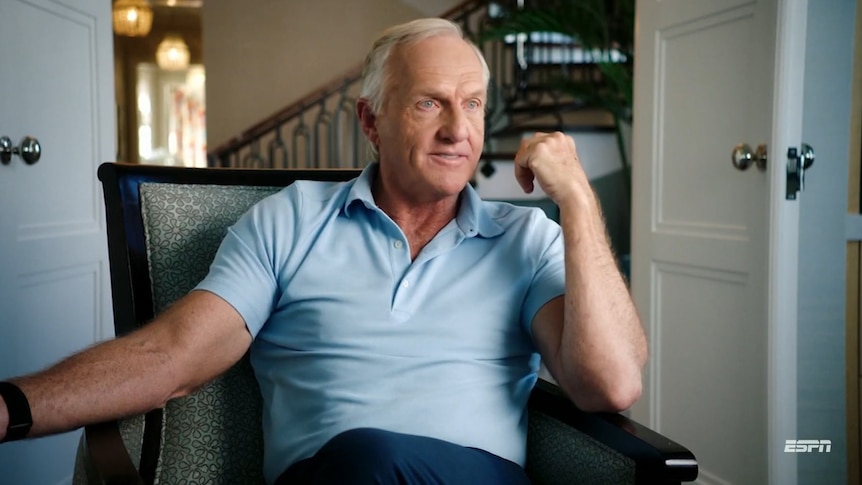 For Australians, the story of Greg Norman’s capitulation at the 1996 Masters is not one to be told again.

It is a sporting event told generationally, passed down from father to son almost like a myth. It is both an endearing reflection on the overall successes of one of our greatest athletes and a warning about the inevitability of failure.

And yet now, at a time when the larger context of Norman’s life and career has never been more relevant, ESPN’s esteemed documentary series 30 for 30 has unearthed that Sunday in April at Augusta National for a international audience.

Simply titled Jaws, the documentary begins with the beginning of Norman’s golf career and ends with his failure to win the 1996 Masters, despite starting the final round with a six-shot lead.

It’s a look back at Norman’s career in the field, delving into the personality traits that made him a resentful smash hit among his fellow pros and ultimately kept him from climbing to the top of the game.

But as we all know, Norman’s story didn’t end in 1996. What is presented as a tragic summary is actually just part of the larger tapestry, another piece of a fascinating puzzle that could help explain the golf disruptor’s motivations. modern. -boss.

Norman fighting from the outside

Norman is the director of LIV Golf, an organization trying to change the face of the professional game by staging lucrative events in direct opposition to the PGA Tour schedule.

LIV Golf is backed by the Saudi Public Investment Fund (PIF), which declares itself independent from the government despite being chaired by Crown Prince Mohammad bin Salman, who has been accused of giving the green light to the murder of journalist Jamal Khashoggi by of Saudi agents in Istanbul.

LIV’s affiliation with the PIF and Saudi Arabia has generated a considerable amount of criticism, with accusations of sports laundering not helped by comments from players such as Phil Mickelson, who called the Saudi government “bad sons of bitches” while noting its value. as a bargaining chip in a financial showdown with the PGA Tour.

Norman, for his part, says his only ambition is to “grow the game.” He is willing to look beyond the Saudi government’s human rights abuses — “every country has its cross to bear,” he says — if it results in an altered landscape of golf and more opportunities for more players to earn more money.

The first event on the LIV Golf calendar is less than two months away. Up to this point, no player has ever stuck his head over the butt and committed to playing on it.

Many high-profile players have officially declared that they will not play in Saudi Arabia-related events, many explicitly for moral reasons and others simply because they do not want to upset the status quo.

And still, Norman fights. His goals are at odds with most players, officials and fans of the professional game, but his steadfast determination to prove doubters wrong remains.

In short, he has become an outsider in a game he once mastered and helped shape with his skill and strength of personality. And he’s still finding his way back.

There’s a moment at the end of Shark, after Norman has been forced to sit through the highlights of his ’96 meltdown and wander the streets of Augusta recounting his many costly mistakes, that crystallizes this.

Norman is in the Augusta clubhouse looking at various memorabilia when he stops by a menu from a previous champions dinner.

“It’s one of the great traditions of this place,” says Norman.

“They do a champion dinner, and the champion chooses the menu, and then everyone signs it.”

Gone from his voice is the confidence and bravado that Norman is famous for. It’s clear how much it hurts him that he’s never been to a Dinner of Champions in Augusta, and he’s never signed that menu.

“That is very beautiful.”

And while Norman rightly points out early on that his “history there is deeper than some guys who’ve won a green jacket,” how could he not feel sad and frustrated, maybe even angry, that he’ll always be left out of this? illustrious part? of the game?

Much of Shark focuses on this element of Norman the Outsider. He highlights the bleached-blond shockwaves he sent through professional golf in the early 1980s, which rubbed many of his opponents and colleagues the wrong way.

It also runs through the ridiculously long list of golf miracle moments when he was on the wrong side, like Larry Mize’s chip in at the 1987 Masters and Bob Tway’s bunker shot at the 1986 PGA Championship.

Flashing back to the 1996 Masters, Norman confesses in Shark that when he took a knee on the 15th hole after a near-miss chip, he cursed the “golf gods.”

Norman comes out of Shark looking graceful in his famous defeats and circumspect about his career in general, but the sense of frustration at what could have been is inescapable.

How much of his crusade to change the future of golf can be tied to pangs of regret from his golfing past, no matter how repressed those feelings may be?

Regardless of the motivation, Norman is currently throwing himself into his current projects with the same courage and flair with which he played.

“You could argue that if he had been more tactical or more conservative, he would have won more,” says player-turned-analyst Brandel Chamblee of Norman’s playing career.

It’s an observation that works as a warning to Norman. There is nothing conservative or nuanced about LIV Golf’s plan, and if their current struggles turn into a complete collapse, that bloodthirsty compromise with a morally flawed and utterly unpalatable proposal will be to blame.

And yet, as Chamblee asks, “But then, would we be sitting here talking about Greg?”

Greg Norman is impossible to ignore, always has been. And he may never stop rebelling against the game that he gave him so much but still keeps him at a distance.