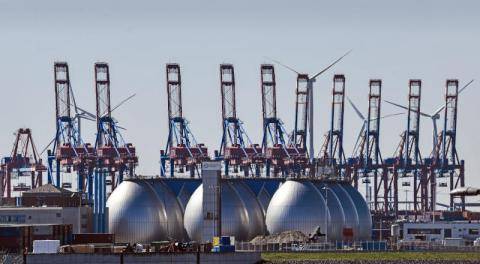 Frankfurt – AFP
German Economy Minister Robert Habeck estimated that the decision to impose a European embargo on Russian oil will be taken “within a few days”, while the issue has not yet won the necessary unanimity within the framework of the 27 countries.
“Only a few countries, especially Hungary, have talked about facing problems,” Habek told public broadcaster ZDF on Monday night. Discussions continue and I think we will see a breakthrough in a few days. The Europeans announced that they would stop importing Russian coal from next August, but the oil embargo that is supposed to be in force at the end of the year is still under discussion.
“The embargo is within reach,” Habeck said, noting that any decision on the imposition of European sanctions needs the unanimity of member states.
Basically, Brussels planned to stop imports of Russian crude oil within six months and of refined products at the end of 2022. But Hungary currently rejects this sixth package of sanctions proposed by the President of the Commission, Ursula von der Leyen, for lack of of guarantees on its supplies. His prime minister, Viktor Orban, who has so far backed all European sanctions despite his closeness to Vladimir Putin, fears price increases.
Hungary has no access to the sea and depends on the oil that comes through the Druzhba pipeline from Russia. For this reason, it requested the exemption for its imports, which together with 0.7 of the 2.8 million barrels per day, represent a small part of European purchases.
The Hungarian government considers the two-year exemption offered to Hungary, Slovakia and the Czech Republic insufficient. It has requested at least four years and some 800 million euros of European financing to adapt its refineries and increase the capacity of the Adria pipeline that arrives from Croatia.