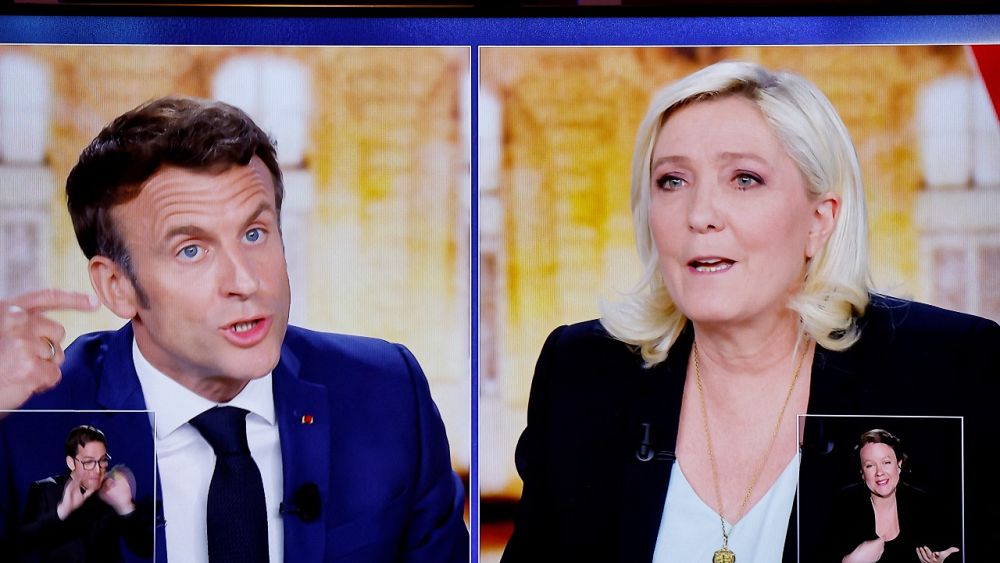 Russia and Europe came to the fore early when Emmanuel Macron and Marine Le Pen squared off in their live televised debate on Wednesday night, four days before the decisive vote in France’s presidential election.

“Another option is possible,” Le Pen said at the outset, stating that she would be “president of everyday life” as she begins the contest with the outgoing president. Meanwhile, the headline began by promising to “take charge of the environmental issue” and “make Europe stronger.”

The far-right challenger, who qualified for next Sunday’s second round along with Macron after the first round on April 10, was under pressure to deal a significant blow to her adversary, who has widened his lead in recent days. according to opinion polls.

When the debate turned to Ukraine, Macron went on the offensive, accusing his rival of “depending on Russian power” and “on Mr. Putin” for having “asked for a loan from a Russian bank.”

“You talk to your banker when you talk about Russia, that’s the problem,” he alleged.

Her opponent rejected the charge, insisting that she was “patriotic … an absolutely and totally free woman.” She accused Macron of taking an “undignified” and “dishonest” stance.

In 2014, the former National Front party (now “National Rally”) obtained a €9 million loan from a Russian bank. Le Pen has justified Russia’s search for financing by citing the French banks’ refusal to do so.

Although she said she categorically condemned Russia’s invasion of Ukraine, Marine Le Pen has been profuse in the past in her admiration for Vladimir Putin, in particular advocating Russia’s annexation of Crimea. Despite the ongoing war, her manifesto advocates closer security ties with Moscow.

Macron was also quick to attack Le Pen’s position towards Europe. The far-right candidate wants to implement a “national preference” policy, take France out of the EU energy market and establish French supremacy over EU law. All issues that would put France on a collision course with the EU.

His opponent insisted that he wanted to “remain in the European Union”, but “profoundly modify it to achieve a ‘European alliance of nations'”.

But Macron accused Le Pen of not explaining her true intentions. “Your plan is to leave the EU. You’re lying about what’s on offer. Europe is a joint property, you can’t decide on your own to paint the facade with glitter,” he said.

The debate began with opening statements from the candidates, with Le Pen saying that “France’s greatest asset is its people.” Calling herself a “spokesperson for the French”, she denounced having seen them “suffer” and worry about a general “precariousness” in the last five years.

For his part, the headline insisted that this period has witnessed “unprecedented crises”, citing the Covid-19 pandemic and the war on European soil in Ukraine. Macron said he wanted to “make our country more independent and stronger through its economy, through work, through research, through innovation, through its culture.”

On the environment, Le Pen accused Macron of being a “climate hypocrite”, while she, in turn, was described by her rival as a “climate skeptic”.

As the debate heated up, the challenger sarcastically suggested that the president wanted to install wind farms everywhere except in the north coast resort of Le Touquet, where Macron has a second home. “You’re serious?” it was the replica of him.

The two rivals also clashed over pensions, the economy and especially the cost of living and high energy prices.

“You never explain how you finance your projects, you are not honest with people,” Emmanuel Macron said of his opponent, whose plans include reducing VAT on energy from 20% to 5.5%.

He also criticized Le Pen for not backing his program supporting an energy cap in the National Assembly.

Some of the liveliest exchanges came later in the debate, when the candidates addressed social issues and, in particular, immigration. Macron accused Le Pen of pushing towards “civil war” by wanting to ban the Muslim headscarf in public spaces.

On security, Le Pen spoke of “true barbarism” as a result of “massive and anarchic immigration”, to which Macron replied that the French do not want “posture”.

The debate was a repeat of 2017 when Emmanuel Macron and Marine Le Pen also faced off in the presidential runoff.

Le Pen recently admitted that her performance on that occasion was a failure. He then lost heavily, winning 33.9% of the vote compared to Macron’s 66.1%.

When the debate ended, some commentators suggested that Le Pen had once again appeared weaker on technical details, particularly the economy, but might have seemed more sympathetic to people’s everyday problems, while Macron risked being seen as arrogant.

While he still leads the polls this year, the margin is much smaller. The last Ipsos Sopra/Steria survey suggests that Macron leads the voting intentions with 56.5% compared to 43.5% for Le Pen. Other polls have suggested a closer race.

Both presidential candidates are seeking to win the support of those who elected Jean-Luc Mélenchon in the first round. The far-left candidate came in third place, winning 22% of the vote with a program focused on the public sector, social aid and the environment.

Polls have suggested that many of those voters may abstain or vote blank. The “Republican front” in which large numbers tactically voted to keep the far right out is substantially weaker than in previous elections.