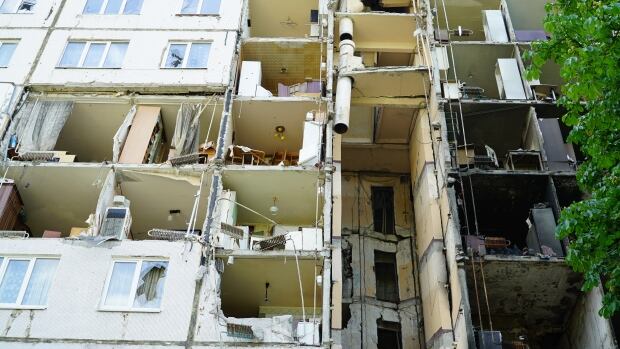 Eight-year-old Danil Baranovsky spent months living underground in a Kharkiv metro station with his family as they tried to avoid Russian rockets.

Now finally living on earth, her favorite book is a flock of rabbitsabout a community of rabbits who have a lot of fun living underground while avoiding the foxes above.

“We were like these rabbits,” said Danil, who misses the friends he made with other kids camping out on the subway. “Because it was fun down there.”

Danil and his family were among those who emerged from the subway stations they had sheltered in for weeks and months in late May, after Ukrainian forces pushed Russian troops far enough from the city center to alleviate the constant bombardment. Kharkiv has withstood the war.

But with the Russians entrenched in positions north of Kharkiv, and the Russian border just 50 kilometers away, the outlying neighborhoods are still under fire.

Not surprisingly, Danil’s mother, Elena Baranovska, with her eight-month-old sister in her arms, has a very different memory of her time underground.

“It was very hard,” he said. “Because you can’t clean and wash your children there. It was cold and wet. [The baby] He was very young. It’s a good thing he was breastfeeding.”

The family home they fled from in March, in a town called Korobochkyno, southeast of Kharkiv, is no longer there. “When we left, only the windows were broken,” Baranovoska said of her former home. “Also the gates and the fence.”

“Now there is nothing and it is very hard because I have no place to return to. What am I going to do with my children? I dont know”.

For now, she and her husband live in a single room offered by the city in what used to be a student dormitory.

The bedroom is on one floor in a building that also houses a bakery. Residents share a common kitchen and bathrooms. Every knock on a door in a long, dimly lit hallway is answered with similar stories.

Larisa Nesterenko is a woman of faith, a bible laid out on a neat table that also holds flowers in a vase and covered with a checkered plastic tablecloth.

Four single beds are made with military precision and every item in the room has an assigned place, right down to the neat row of shoes on a shelf along the wall.

Nesterenko, a widow, actually worked for the Kharkiv metro when the war started. When her neighborhood was attacked, she soon found herself living there as well, fleeing the apartment she lived in with her daughter, her grandson, and her son-in-law.

“At the end of February, our house was already bombed,” she said, often overcome with emotion, tears streaming down her cheeks. “The main thing is that we have a roof over our heads [now].”

‘How could this happen?’

Nesterenko was able to visit his apartment a month ago and returned for the forgotten documents in his haste to leave. A rocket had hit the apartment above hers, setting it on fire.

She shows a video of what was left behind: a basket of eggs on a counter, still untouched, while everything around it is charred; a kettle standing on a pile of burnt rubble.

“My entire pantry was filled with pickled vegetables,” he said. “Everything burned down. The jars fell and broke. The kid’s room. The living room. I don’t think I ever had any furniture.”

His greatest loss, however, is more personal than the department he worked hard to maintain. She also destroyed photos of her late husband.

“How could it happen that our so-called brother Russia attacked Ukraine? I can’t understand this, even now.”

Kharkiv, the second largest city in Ukraine before the invasion, is a majority Russian-speaking city. Its proximity to the Russian border has meant more cross-border trafficking and family ties on the other side. Many Kharkiv residents say those ties are now irrevocably broken.

The city’s mayor, Ihor Terkhov, has said Russia’s bombardment of Kharkiv has left some 150,000 people homeless.

It was Terkhov’s decision to get the metro system back on track, which is now free for all passengers, as the city tries to encourage people, and the economy, to return to work.

As people resurface or begin to return to the city, the humanitarian needs are great.

A recent food distribution point run by the Catholic charity Caritas drew a large crowd in central Kharkiv. The fights broke out after rumors spread that there would not be enough bags of food for everyone waiting.

A Caritas worker on site said the charity is feeding at least 3,000 people every day in different parts of the city.

Natalia Desiatinnikova is one of them. The 57-year-old woman had her three-year-old granddaughter in tow helping carry some of the canned meat and bottled water on offer.

There are some restaurants and cafes starting to reopen in Kharkiv, but many more are still closed.

Desiatinnikova believes it is still too dangerous for people who fled the city in the first days of the shelling to consider returning.

“It’s not worth going back yet. Because [there is] the bombings continue to happen every day. Like on a schedule,” she said. “It’s too soon to go back. We can hear it in the center of the city and also in the suburbs.”

Saltivka, a neighborhood in northern Kharkiv, has been one of the hardest hit by Russian bombs and rockets. It was filled with densely packed apartment buildings before the war.

Those still standing are pockmarked, blackened by fire.

One building was hit by rockets on 11 separate occasions, according to a resident who had returned to make sure no one ransacked his apartment.

Part of the front of the building simply flaked off, revealing a collapsed stairway, the innards of the structure, and the lives of the people who used to live there; tables teetering on the edge of nowhere, radiators dangling between floors.

Saltivka remains one of the most exposed parts of Kharkiv. When it is bombed, the rest of the city can hear it.

That has been enough to keep some people underground, with permission to stay in certain underground stations, in corners away from passenger traffic.

“It’s scary what’s happening in the north of the city, in Saltivka,” said Ruslan Omelnik, who used to make a living repairing printers.

“There are explosions. And we are afraid to leave the shelter because the bombs keep flying.”

‘Wait every day for the bombs to fall’

Omelnik and eight other people set up their mattresses behind escalators at a central station. There is a table with a microwave, bottles of water and boxes to delimit people’s personal space.

Another station, closer to Saltivka, reportedly has about 50 people still living underground.

Omelnik first moved into the shelter, not far from his own apartment, just days after the Russians invaded Ukraine on February 24.

CLOCK | Russian Forces Pulled Back in Kharkiv, But Attacks Continue:

Russian forces pull back in Kharkiv, but attacks continue

“At first, I would go to the basement and stay there for a while. But when the planes started flying over us, I couldn’t stand it and came here,” Omelnik said.

His apartment has not been attacked, but he is still unwilling to leave the subway, acknowledging that he is probably suffering from psychological trauma. His wife and daughter, he said, are in Lviv, a relatively safe city in western Ukraine.

“They offered me to talk to a psychologist, but it is very difficult to overcome your fear. Because when you go out [of the subway] And at night you hear explosions, it makes you paranoid. You are waiting every day for bombs to fall. I want to be home, but I can’t force myself to.”

He is also convinced that the Russians will return to Kharkiv.

“They have more weapons. And the power. And they’re probably more likely to come back.”