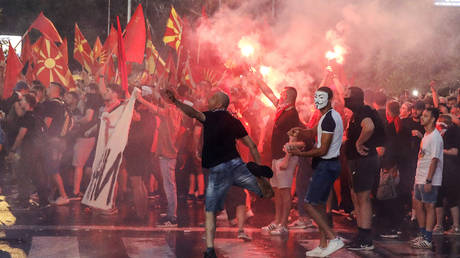 Speaking at a press conference in Brussels, von der Leyen praised Skopje and Tirana for their progress on the path to joining the bloc, including strengthening the rule of law, fighting corruption and implementing a series of reforms.

She said that the governments of the two Balkan nations have been moving towards becoming members of the EU because those steps are “good for their countries and they are already delivering a better quality of life for their people.”

“This historical moment is its success. The result of your hard work.”, he reiterated.

“We have taken another important step in bringing the Western Balkans closer to the EU. It is a great success of our presidency,Czech Prime Minister Petr Fiala tweeted on Monday.

North Macedonia (then Macedonia) gained candidate status in 2005, but it took years for Skopje to resolve some of its disputes with neighboring countries, including Bulgaria, which had blocked the nation’s EU membership over linguistic and historical issues.

This opposition also hampered Albania’s progress, since the EU treats the issue as part of a single package. Notably, the two nations are going together on the 2021 EU enlargement package, a comprehensive strategy that sets priorities to remove obstacles to EU membership for the Western Balkans.

However, on Sunday, Bulgaria and North Macedonia managed to reach an agreement that allowed Skopje and Tirana to formally start EU accession negotiations. North Macedonia, in particular, agreed to amend the nation’s constitution to recognize its Bulgarian minority, protect minority rights and fight hate speech.

Before that, however, the French-led “compromise solution” on the matter sparked fierce protests in North Macedonia, in which crowds of nationalists gathered outside the parliament building and clashed with police.

It may be years before the two Balkan countries become full members of the EU, with no deadline set for the process. In order to join the union, candidates must undergo a national law screening process to bring it in line with EU law.